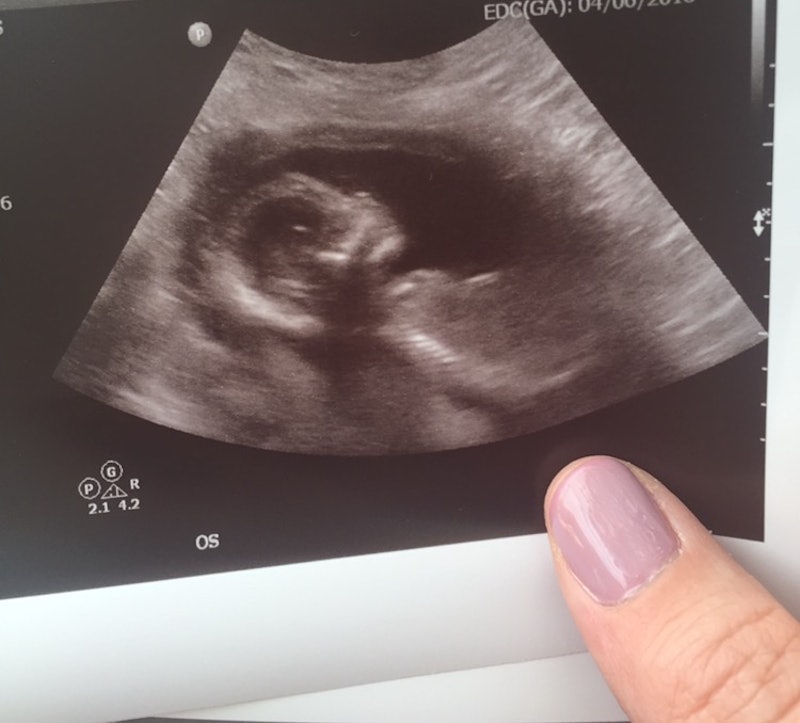 Much like how Trump knows nothing about what it's like to have an abortion, he knows even less about me and why I had one. Last year, after six months of trying to conceive, my husband and I were thrilled to find out I was pregnant. Even after taking advantage of all the advanced testing and screening that was available to me before the halfway mark of pregnancy, when we had my 20-week ultrasound, we discovered that my baby girl (whom we had already lovingly named Evelyn) had an extremely rare and lethal condition that was incompatible with life. Our baby had a very slim chance of making it to term, and if she did, she would live for a few hours at best, suffering the entire time.

Just over a week later, my husband and I made the heartbreaking choice to spare Evelyn a short life of pain by terminating my pregnancy. The choice wasn’t easy, but we knew that it was in the best interest of our child, and to us, that was the definition of being parents. Because I was past 20 weeks of gestation, I was counseled extensively on the way to end my pregnancy which was safest and most compassionate for both myself and my daughter. My termination took place over a three-day period in a well-known and respected hospital, with a kind and compassionate medical staff which treated me, my husband, and Evelyn with dignity.

So when I heard Donald Trump say, “In the ninth month, you can take the baby and rip the baby right out of the womb, just prior to the birth of the baby,” tears of anger and indignation ran down my cheeks. No, this is not how late-term abortion works. My baby was not ripped from my body or my womb, and the decision was certainly not made in the callous, brutal way he suggests.

His statement is as dangerous and erroneous as the majority of his campaign positions, working off the idea that if he says something inflammatory and scary enough, he can turn it into the truth. What Donald Trump is trying (and failing) to reference are the 12,000 abortions that occur each year after 21 weeks of gestation (roughly 1.2 percent of all abortions). These procedures are highly regulated and legally protected in order to ensure that any woman who receives a devastating prenatal diagnosis for herself or her baby can get safe care to end her pregnancy, just like I did. Donald Trump's words prove he knows nothing about this.

Being a woman means making tough decisions about your body, your child, and your motherhood. It means making a choice that you selfishly don’t want to, but which you know you have to, because your love for your unborn child is greater than the pain you will endure in going on without them.

I also suspect that Donald Trump doesn’t understand that so many of these pregnancies are very much wanted babies, like mine was. Late-term abortions are made under the most dire of medical circumstances, in a crisis situation, when a woman's health or the health of her baby are in jeopardy. A woman doesn’t just wake up a few days before her pregnancy reaches term, with a baby she has nurtured for months on end, and decide it isn’t worth the trouble. Nor does she lack compassion to such a degree that she would carelessly have her unborn baby ripped from her womb.

For a man who has claimed that he would punish women for having an abortion, then in the same campaign cycle proclaims, “No one respects women more than I do,” it would benefit Trump to actually have even the smallest inkling of what it means to be a woman as it relates to the issues he makes dangerous assertions about. Being a woman means making tough decisions about your body, your child, and your motherhood. It means making a choice that you selfishly don’t want to, but which you know you have to, because your love for your unborn child is greater than the pain you will endure in going on without them. It means carrying the burden of the best choice for your family, regardless of how many uninformed politicians try to vilify it to advance their own misguided agendas.

If Donald Trump knew anything about abortion or respecting women, he would educate himself on the matter and realize he’s not equipped to get involved in such a complicated issue — a choice that should only be made by a woman and her doctor. If he really wanted to start respecting women, he could start to simply trust women to make the best decisions for themselves.

What I do know is that I will be making another choice this November, and it will be casting my vote for the woman who stood up for me in the final presidential debate: Hillary Clinton.

More like this
What The Lionesses’ Win Really Means For The Future Of Football
By Angelina Kelly
The 4 Best Round Brushes For Bangs
By Mackenzie Edwards
13 Side Part Hairstyles That Are Far From Emo
By Meguire Hennes
Bustle Newsletter: August 17, 2022
By Stephanie Talmadge
Get Even More From Bustle — Sign Up For The Newsletter