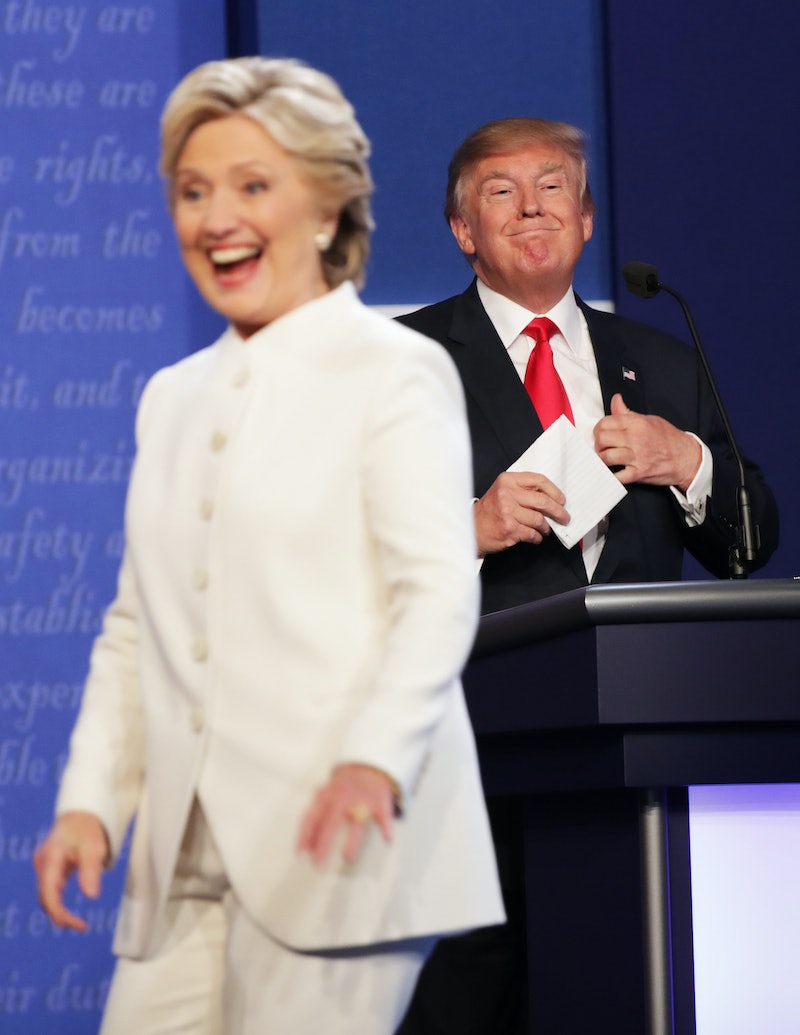 The big headline from last night's final presidential debate is, deservedly, the comment by Donald Trump that implies he may not accept the final result of the election because of "rigged voting". However, another comment is also storming social media: the point where Trump, for no apparent reason, declared that his opponent Hillary Clinton was "a nasty woman". Glorious riots ensued online, with everything from Janet Jackson's classic "Nasty" on repeat to declarations that "we are all nasty women". Though it's entirely probable that Trump's choice of adjective was off-the-cuff rather than premeditated, he certainly picked an interesting one. "Nasty," as a word, has had a fascinating history in the English language, gathering overtones of uncleanliness, class, negative female sexual behavior, and many other things over the course of its use. It's not an uncomplicated word, and its history unpacks a lot of the ways in which we think about what we don't like, particularly in terms of regulating female behavior.

The most obvious aspect of using the adjective "nasty" against a political opponent is that it is extremely personal criticism. As we'll see, though, the word's accompanying meanings aren't just about moral failings or personality clashes; it has a very visceral history, one that sits uncomfortably with high-end political discourse. Its baggage is bodily as well as conceptual: it's more nuanced than just calling Clinton "crooked" (as Trump has done regularly) or "bad" or "immoral". It implies a kind of will to spitefulness, as modern definitions identify: the Collins Dictionary looks at all the different components of the word "nasty," from merely "unpleasant" to "abusive or ill-natured" and even "obscene". (The fact that these adjectives are possibly better fitted to Trump's own conduct has not escaped commentators.)

Looking back on the origins of the word nasty is an interesting and sometimes bizarre ride, in which its specific modern usage becomes intriguingly clear.

The Origins Of The Word "Nasty"

The origins of the word"nasty" both illuminate Trump's usage and give us more questions. We're actually not entirely sure how the word entered English, which is more common than you might think. There are two ideas: one is that it evolved from old French nastre, which meant something like "vicious" and was a shortening of villenastre (yep, that is in fact the source of our word "villain"). (Hilariously, an etymologist pointed out in the 1970s that this likely meant people originally pronounced it "nesty"). The other is that it came from the Dutch nestig, meaning filthy in the manner of a bird's nest.

A 1783 etymological dictionary by the splendidly named George William Lemon shows that it had fully entered English discourse by that point, but that it still retained its air of hygiene, with Lemon suggesting that it might be from nates, the Latin for buttocks, or from something to do with constipation or "any kind of muddy moisture". Nasty, in that era, was decidedly about things being unclean and/or extremely immoral.

There's An Urban Legend That A Political Cartoonist Popularized It

This is one of the more bewildering parts of the word's history: urban legend insists that it emerged from the name of the American political cartoonist Thomas Nast, who worked from the mid-19th century to the early 20th and could indeed be extremely vicious. (He specialized in cartoons about the Civil War and American political corruption, including one, in which he depicted a corrupt New York politician as a vulture eating the city's corpse, that nearly caused him to be run out of town.) However, "nasty" was in use far before this, and Nast wasn't even close to the most vitriolic cartoonist in American political history — though he is responsible, oddly enough, for our current tendency to assign the elephant and the donkey as the symbols of the major parties.

It's Been Applied As An Insult To Everyone — Especially Children

We can view the evolution of "nasty" over time through its use in English sources. In the time of Thomas Hobbes, the English philosopher writing in the 17th century, "nasty" had evolved to be something one used to describe somebody's temperament, or the general state of things. Hence Hobbes' famous use of the word (likely its most infamous outing) in his passage in Leviathan, describing the life of man in the "state of nature" as "solitary, poor, nasty, brutish and short". Whether he meant physical squalor or personal viciousness, or some combination of the two, isn't clear.

Interestingly, one of the ways we can see the word shifting is in how women used it about children. Queen Victoria, writing in the mid-1800s about children, wrote that "An ugly baby is a very nasty object — and the prettiest is frightful when undressed," indicating that nastiness was meant to be physical (and that she was clearly disgusted by babies). And Jane Welsh Carlyle, wife of essayist Thomas Carlyle, wrote at about the same time that children were "nasty little beasts;" but she appears to be using it in a less "disgusting" sense and more a general horror. She also commented that Ramsgate, an English town, was beset by nastiness: "the shops nasty, the people nasty, the smells are nasty!" For Carlyle, nastiness was something about class and elegance. If it was somehow against her taste as a high-bred woman, it was "nasty".

Its Modern History Has Often Been Female, Negative, Racial, And Sexual

"Nasty" has, in the modern era, not always been about women. A New York Times discussion of it in 1987 mentions that both Agatha Christie and Monckton Hoffe tended to describe their villains, regardless of gender, as "a nasty bit of goods" or "nasty piece of work". But it's pretty obvious that, particularly in America, "nasty" has a pretty gendered side to its history.

A famous book from 1996, Kathleen Brown's Good Wives, Nasty Wenches and Anxious Patriarchs , explains that, in Virginia law in the 17th and 18th centuries, "nasty" women were a racial category, determining status. "Yet some wenches who are nasty and beastly and not fit to be so employed [as domestic servants] are put in the ground [working the land]," one commentator noted. The women in question, obviously, were African American slaves who weren't allowed to work in houses. Brown explains that "nasty" women in this context was shorthand for "depraved, degenerate wretches who were barely fit for the manual labor of men."

From that basis, "nasty" attained a new definition: sexually licentious, often specifically in a way that described females. The epitome of this, of course, is the Notorious BIG's song "Nasty Girl," (which is likely the first time anybody has talked about him and Hillary Clinton in the same context); but it gained traction across the '80s with songs like Vanity 6's "Nasty Girl," which is a great jam about female sexual freedom and "my own little nasty world". Destiny's Child had its own song (pre-feminist awakening) about a "nasty girl" that explains "these men don't want no hot female that's been around the block female, you nasty girl".

The word has journeyed from a description of physical uncleanliness to a condemnation of sexual behavior (though what actually classifies as nasty, of course, is up to the viewer, with everything from promiscuity to willingness to perform certain sexual acts up for the description). It did have its moments in describing boys (Janet Jackson, if you're nasty), but it female aspect is pretty pronounced. It's even found its way into law; Britain had an extended conversation about censorship in 1984 because of the regulation of "video nasties," films on video that were either extremely gory or pornographic.

It's Had A Small Feminist Reclaiming

These days, the idea of being "nasty" is, as a woman, less problematic than it once was, because people like Sophia Amoruso have reclaimed the word slightly. Amoruso runs Nasty Gal clothing, a successful clothing line, and published the extremely feminist memoir #GirlBoss in 2014. But nothing, perhaps, will have done so much for "nasty" as a term, in regaining its power for female speakers, as a powerful man deciding that it's a good idea to use it to insult a powerful woman on the world stage.

So get your #NastyWoman shirt on, get out to the polling place, and make it clear that calling your female opponent something with overtones of sexual condemnation, dirt, and immorality is about the nastiest thing there is.

Bustle has partnered with MTV’s Elect This to spotlight the issues that matter this election cycle. To find out more about how you can vote to elect women's rights in the 2016 election, visit gender.electthis.com.

More like this
The 7 Best Undershirts for Women
By Elizabeth Enochs
Claire Foy & Rooney Mara Revisit A Devastating Tale In 'Women Talking'
By Bustle UK
Britney Spears Celebrated Her Birthday With Loving Messages To Jamie Lynn & Her Sons
By Brad Witter
Designers Say If Your Home Doesn't Have Any Of These Things, It Looks Outdated
By Claire Epting
Get Even More From Bustle — Sign Up For The Newsletter