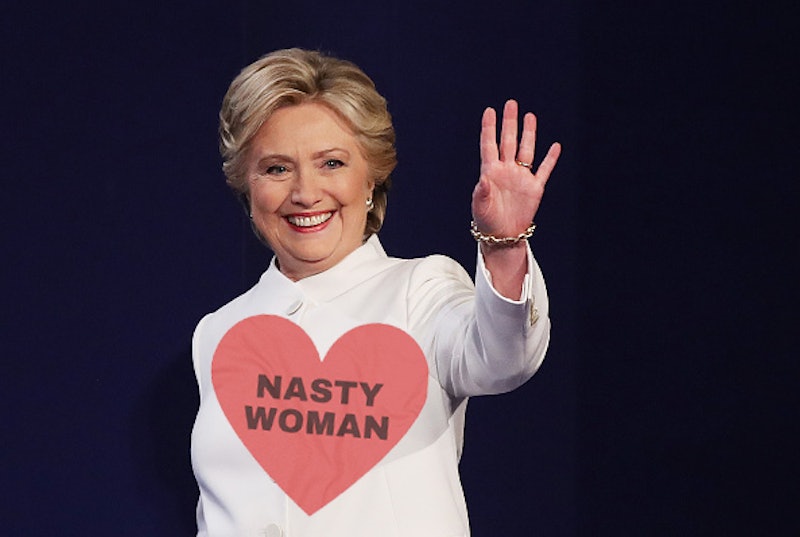 There was no shortage of drama at the final presidential debate of 2016. During the first two debates, Donald Trump reduced to name calling and attacking — especially women. While there were certainly a few memorable lines of the night, one stands out as the most incredible: Trump declaring that opponent Hillary Clinton is a "nasty woman." With an opportunity to dress up right around the corner, why should Clinton have all the fun? Below, I'm showing you how to be a "nasty woman" for Halloween. Trump might not have called these notable women nasty, but he has insulted them all publicly in some way, and it's not acceptable.

Unfortunately, Trump has insulted countless women throughout not only his campaign, but also throughout his life. Whether he's attacked their looks, ability to be unbiased, intellect, or competence, there's practically nothing that is out of bounds for Trump to say to or about a woman. However, the interesting part is that Trump tends to insult the strong, capable women who have made a name for themselves and worked very hard for their accomplishments. As the country has seen from the Access Hollywood tape, Trump has no problem bragging about sexual assault and then dismissing it as locker room talk instead of a serious problem.

Trump calling Clinton a nasty woman was the final straw in a series of so many horrible comments. Unfortunately for Trump, women are embracing the mantra post-debate. The feeling is that if Clinton, who will hopefully be the first woman elected as the president is a "nasty woman," then it can be seen as almost a badge of honor. It tells the world that you're not afraid to stand up for what you believe in and get shit done.

So, here's how you, too, can embrace your inner "nasty woman" and dress up as one of the many badass women Trump has insulted for Halloween. For each of these costumes, consider adding the "Nasty Woman" shirt ($25, Google Ghost) underneath or layered on top. Half of proceeds go to Planned Parenthood. Or make your own!

1. The HBIC Herself, Hillary Clinton

Clinton has been on the receiving end of so many offensive attacks from Trump, it's a little alarming. The New York Times put together a fascinating chart of Trump's Twitter insults, and the attacks against Clinton alone are extensive.

Step 1: A Clinton wig for $17 on Amazon will give you an easy take on her signature hairstyle.

Step 3: Call out all your friends who have weaseled their way out of paying for something.

The Supreme Court justice has been very outspoken in her dismissal of Trump as a presidential candidate. In turn, Trump has insulted the beloved justice and called her inappropriate.

Step 1: Pull your hair back into a chignon to match Ginsburg's signature hairstyle.

Step 2: Put on a justice gown for $30 from Amazon. An old graduation gown will work, too, just make sure it's black.

Step 3: Ginsburg's jabots are quite unique, but you can recreate her signature look with a similar-looking bib necklace for $72 from Baublebar. Add glasses for $10 from Amazon and your liberal judge costume is complete.

Step 3: Call every person in a Trump costume you see a "faker" and tell everyone you're moving to New Zealand if you have to. But don't apologize.

Early on in campaign season, Trump went after Kelly because he thought she was asking him unfair questions and famously said she had "blood coming out of her whatever."

Step 1: Capture Kelly's short haircut with a platinum blonde wig for $13 from Amazon.

Step 2: Slip on a blue cocktail dress for $140 from Topshop.This one has a tiny cutout in the middle like Kelly's, but still has the professional feel for a news anchor. Finish up with a pair of basic pumps for $25 from Forever 21.

Step 3: Ask fellow Halloween celebrators if they wanna know where your blood comes out.

When Clinton brought the former Miss Universe winner into the debate, she used her as a specific example of how terribly Trump treats women. After Machado won the title in 1996, Trump complained that she had gained weight and even called her "Miss Piggy." Since then, Machado has become a U.S. citizen who is registered to vote and has been publicly supporting Clinton.

Step 3: Anytime anyone says anything negative about you (or just anytime), interrupt them with "I don't think so!"

Not even a Kardashian can escape Trump's insults. When asked about whether he thought it was wrong of the wealthy reality star to register for gifts while pregnant, Trump said he didn't think so, but then turned the tables and started discussing Kardashian's weight instead. With absolute no prompting, he said, "She’s gotten a little bit large. I would say this, I don’t think you should dress like you weigh 120 pounds." It was infuriating. She's worked hard for her incredible body, and should not be shamed for dressing how she wants. This Halloween, summon your inner Kardashian and represent the boss lady who earned her first Forbes cover this year.

Step 1: Get Kardashian's long straight hair with this wig for $10, Amazon.

Step 2: Pick your white lacy slip. While her look is more like lingerie for $40 from Victoria's Secret, if you want, there are definitely other less revealing options like a white midi slip for $45, ASOS.

Step 3: Add a white satin robe for $22 from Target. Tie it around your waist and let it fall loose over your shoulders. Slip into clear heels for $51 from Miss Guided and some fake bling for $3 from Party City.

Step 4: Unapologetically take lots of selfies and clap back at any fool who says something about it.

Trump calls Warren "Pocahontas." The complete lack of respect for someone and her heritage does not even seem to affect Trump. Warren has been vocal about her Native American heritage, and for some reason, he thinks it's OK for him to use it against her and use it to name call. Although there's been debate on the legitimacy of her identification, there is still no reason for him to mock her as Pocahontas. Let this rage fuel you as you dress as the hardworking senator for Halloween.

Step 1: The Massachusetts senator is often seen wearing colorful jackets. While Warren's Nina McLemore jackets will set you back around $600 from Nina McLemore, there's a more affordable alternative from Kensie for $90 from Macy's. Layer it over a black shirt for $9 from Target or your Nasty Woman shirt, add black pants for $28 from Target and don't forget to roll up the sleeves in typical Warren fashion.

Step 2: Warren's other signature feature is her cropped hair. To get the same look, add a blonde wig for $10 from Amazon or cut a longer one.

Step 3: Whenever anyone asks you who you are, whip out your phone and tweet them things like "put on your big boy pants" or "Weak!" and point out any of Trump's failings.

The HuffPost co-founder received Trump's disapproval in 2012 when he tweeted that she is unattractive inside and out. Because Trump can't stop at disliking a woman's personality, he apparently also has to say that he thinks they're ugly.

Step 1: Huffington's gorgeous hair is hard to achieve, but if you use a volumizing product for $6 from Amazon and straighten it, you can get close.

Step 3: Practice your Greek accent, and talk about the benefits of getting enough sleep each night. Insist Trump must need more, you know, considering.

The Sleep Revolution: Transforming Your Life, One Night at a Time, $16, Amazon

Abedin is Clinton's aide and all around right-hand woman. Trump once suggested that Abedin probably shared classified information with her husband, Anthony Weiner. Because women don't know how to keep things confidential, right?

Step 1: Abedin is known not only for her prowess in assisting Clinton, but also for her exceptional style. Start off the look with a black floral dress for $68 from Topshop.

Step 2: If you have long hair, curl it at the ends, and if not, this wig for $19 from Amazon will give you a similar look.

Step 3: A red lip for $28 from Amazon and heels finish off the Abedin style.

Step 4: To make it more authentic, you can check your phone throughout the night or carry a briefcase full of important foreign policy notes because you never know when a crisis will occur and your expertise will be needed. Completely ignore any Trump costume you see.

All of these women are strong and hardworking. None of them deserved to be insulted by Trump. If he's going to go around calling someone who gets things done a "nasty women," then all the better to embrace the name and wear it proudly through your Halloween costume.

More like this
Watch Jacinda Arden’s Devastatingly Honest Resignation Speech
By Sam Ramsden
What The UK Blocking Scotland’s Gender Recognition Bill Means
By Sam Ramsden
Ashamed Of Your Screen Time Stats? Here's How To Change That
By Alexis Morillo
15 Vegan Makeup Brands To Shop For Cruelty-Free Glam
By Audrey Noble
Get Even More From Bustle — Sign Up For The Newsletter
From hair trends to relationship advice, our daily newsletter has everything you need to sound like a person who’s on TikTok, even if you aren’t.