Did you know they were making a New Girl spin-off movie? Okay, that's not really what this is — but Jake Johnson and Damon Wayans Jr. are acting a hell of a lot like their New Girl characters. The red band trailer for Let Be Cops , Johnson and Wayans' buddy comedy is here and it could easily be an episode of their FOX comedy series. We love Nick Miller and Coach, so obviously we're not complaining — but the similarities are uncanny.

The three-minute trailer introduces Johnson and Wayans' characters, Ryan and Justin respectively, as a pair of lovable, screw-up, 30 year-old BFFs (basically Nick and Coach) that are wondering how they got "so off track". The rest of the trailer follows them as they show up to a party dressed as cops and then take the costumes way too far, ending up involved in some ridiculous hijinks in their neighborhood. Mostly by cheers-ing with their fake guns in the middle of a restaurant, swiping joints from unsuspecting frat boys on the street, using the uniforms to attract a local waitress played by The Vampire Diaries' Nina Dobrev, and respond to domestic disturbances at sorority houses. Basically your standard buddy-comedy formula.

Maybe we can't get past Johnson's voice and associating him with Nick Miller — or it's the fact that Wayans is obviously the more ambitious and ladies' man member of their twosome. Either way, Johnson's first line in the trailer, "What are you talking about? We both have good things going on right now," in response to Wayans' asking how they got so off track is SO NICK MILLER. (By the way, that "good thing" he's got going on, is a herpes commercial.)

Let's Be Cops, which is set for an August 13 release, looks like it'll at least be 21 Jump Street-level funny (even though that might not be a fair comparison). Watch the trailer here: 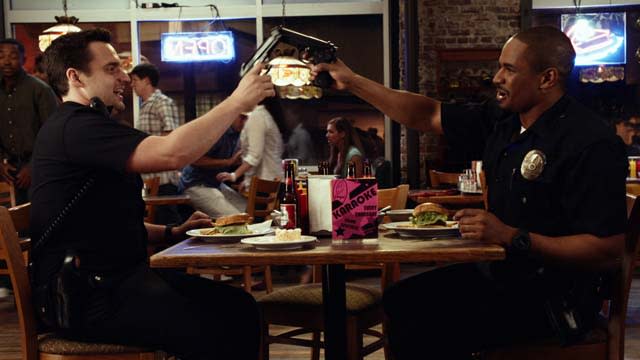