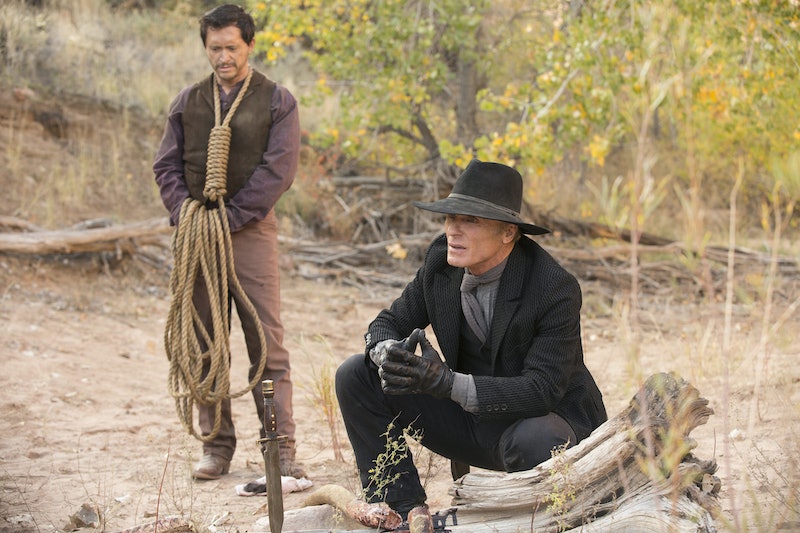 The pattern has now been established that Westworld will almost always begin with a quick chat between Bernard and Dolores. The timeline of their conversation is unclear, as are Bernard's motives. At the top of Oct. 23 episode, what does become clear is that Bernard knows a lot more than he lets on when he tells Dolores about a maze in Westworld that could "set you free." The obvious connection here is to the Man In Black, who has been hunting for a mysterious maze in the park since the first episode, and he later also tells a host that this maze could help "set you free." Even with two people making such similar statements, what the maze means to Westworld is as mysterious as ever.

To use gaming terms, the maze seems to be akin to the final level of Westworld or something even greater than an ending, like a secret level you play after you've beaten the game — one that is impossibly difficult but promises great reward if you succeed. The Man In Black describes it as the park's greatest challenge because it's the only place where guests are not safe and the threat of death is absolutely real. He also associates the maze with a name that grows more familiar with every episode: Ford's mysterious co-creator, Arnold.

Both Dolores and The Man In Black are now on the hunt for the maze, for seemingly different reasons. Dolores believes the maze will "set her free," while the Man In Black hopes to "honor" Arnold's legacy by completing the one obstacle in the park where he could truly die. Arnold died in the park, and The Man In Black believes the maze has something to do with it. It's possible that Arnold died attempting to complete Westworld's greatest challenge, one of his own design, and that there is an incredible reward waiting at the center of that maze. It's also possible that Arnold himself isn't really dead and is patiently waiting for the person who will eventually complete the maze.

There are many questions surrounding the maze and few answers in sight. Attempting to navigate the many strands of information is a puzzle in itself, trapping the fans in a maze of loose ends and curious details much like the Man In Black or Dolores may eventually find themselves physically trapped. Whatever secrets the maze does hold, it looks like the only thing that could stop the Man In Black from discovering the answers is death itself. Once those answers are revealed, hopefully, the hosts can be "set free" (whether by achieving full sentience or being released into the real world) from the park and Westworld viewers can be set free from this curious mystery.

More like this
'Criminal Record' Is The 'Doctor Who' Reunion We’ve All Been Waiting For
By El Hunt
Emilia Clarke Shares More Details About The New 'Game Of Thrones' Series
By Maxine Harrison
“The Door Is Always Open” For Another 'Breaking Bad' Spin-Off, Says AMC Boss
By El Hunt
James Marsden Kept Teddy’s Westworld Season 4 Return A Secret “For Years”
By Brad Witter
Get Even More From Bustle — Sign Up For The Newsletter