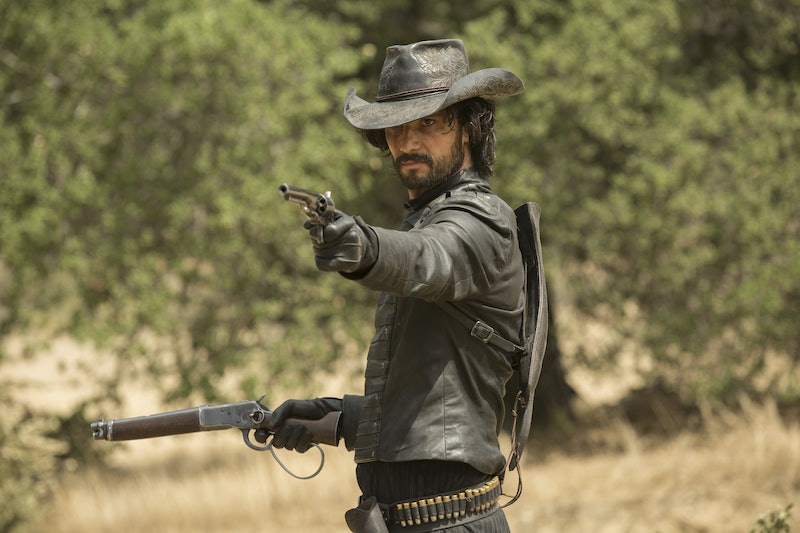 Westworld is all about playing God. Well, it's about other things, like what it means to be alive and how cool Radiohead sounds on a saloon piano, but it's impossible to throw a tumbleweed anywhere in Westworld without hitting someone that has a God complex. Whether it's an ego-driven guest, an engineer who enjoys having control of the hosts, or a host who is dealing with getting a peek behind the curtain, almost everyone in the Oct. 24 episode of Westworld is confronting religion and "God" in their own way.

When Ford sits down for dinner with Theresa, the topic turns to the subject of God. Who amongst them could play a God — in this case, Ford was talking about his partner and Westworld co-creator, Arnold — and how Ford believes that he and the Board of Delos Destinations could be in conflict over which of them is the true "God" of the park. Ford's interest in playing God is anchored around the repeating image of a steeple sticking out of the ground — ground that is later bulldozed and churned up during the end of Ford and Theresa's dinner as the earth shakes around them (talk about a power move).

Elsewhere in Westworld, Maeve is dealing with the fact that she has seen her "Gods," aka the mysterious suited men who take bullets out of her and bring her back to life time and time again. When speaking with Hector, she learns about the religion of who she calls the "savages," which depicts the men she's so curious about and speaks of "the man who walks between worlds." The religion Hector describes seems to indicate that either certain hosts have an idea of how Westworld is really run and chalk it up to religion, or the engineers programmed the religion into those hosts to explain their involvement in the park. Either way, as the gap between the hosts and engineers closes, the scientists will have a lot to answer to once the hosts realize that they are not truly Gods.

While many patrons, like the proudly black-hat wearing Logan, enjoy playing God by killing whoever they want, the mysterious patron known as the Man in Black seem to be searching for a greater purpose within the park. Everyone in Westworld is looking to either be God or meet God, but the former shouldn't get too comfortable with their elevated position in the park's hierarchy. As they say, "What's a God to a non-believer, who doesn't believe in anything?"