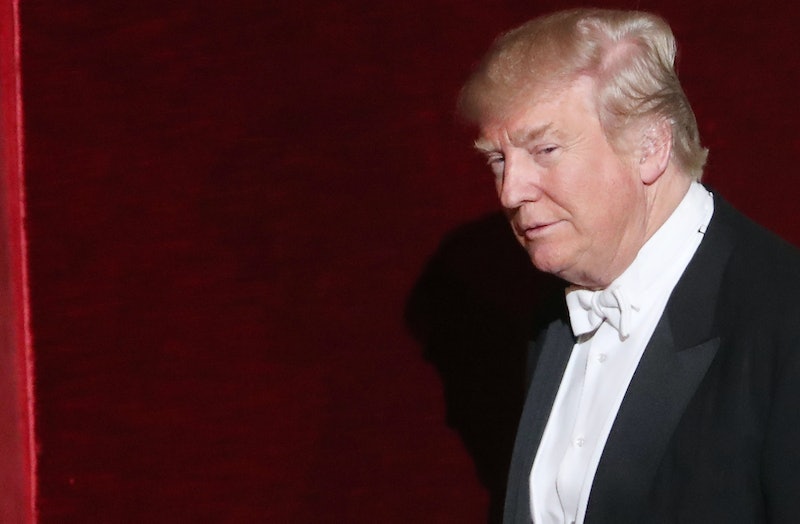 Speaking at a rally on Thursday, Donald Trump doubled down on his prior claims of the election being "rigged." It's clear now that Trump will accept the election results... if he wins. And it's not the first time the Republican candidate has questioned the integrity of the election. During Wednesday's final presidential debate, Trump refused to reveal whether he would concede the election if he ends up losing, telling moderator Chris Wallace, "I will look at it at the time. ... I'll keep you in suspense." His opponent Hillary Clinton immediately called Trump's words "horrifying." And in reality, Trump's refusal to back down isn't doing him any favors.

On Thursday, Trump attempted to clarify his earlier statement, saying he would accept "a clear election result," but that he reserved the right to contest a "questionable" election. "This is having nothing to do with me but having to do with the future of our country. We have to have fairness," CNN reported Trump saying.

But Trump seems to be overestimating the number of people committing voter impersonation in the United States. A comprehensive investigative study by a Justin Levitt, a Loyola Law School professor, found that between 2000 and 2014, only 31 allegations of voter fraud occurred. And some of these allegations hadn't been investigated yet, meaning the claims of voter impersonation could actually be debunked. "To put this in perspective, the 31 incidents below come in the context of general, primary, special, and municipal elections from 2000 through 2014," Levitt wrote. "In general and primary elections alone, more than 1 billion ballots were cast in that period."

This means that out of more than 1 billion ballots, only 31 were found to be questionable. That is such a small, small percentage of the number of votes cast. And no presidential election has ever been won by such a small margin. Even during the contested 2000 presidential election, the margin between Al Gore and George W. Bush in Florida was 1,784 votes, according to NBC. Judging by past precedent, any voter fraud that might be committed during this election will not change its results.

But there are further issues with Trump's "if I win" statement. It seems like he might not understand how elections work; he hasn't won just by entering the competition. The presidential election exists for the American people to choose one person to represent the United States. This isn't elementary school, where all the students who try out for the class play get a role. There are no prizes for participation. This is an election with real results for the American people. And if they don't choose Trump to be their president, he doesn't get to overrule their decision. That would be overturning the democracy this country was built on.

Trump's running mate, Gov. Mike Pence, has said he and Trump "will absolutely accept" the results of the election. But Trump and Pence have made conflicting statements before, with Trump saying he disagreed with Pence's position on Syria during the second presidential debate. Hopefully, Trump realizes what is wrong with his "if I win statement" if Clinton wins, or the nation may be in for a whole new world of trouble.