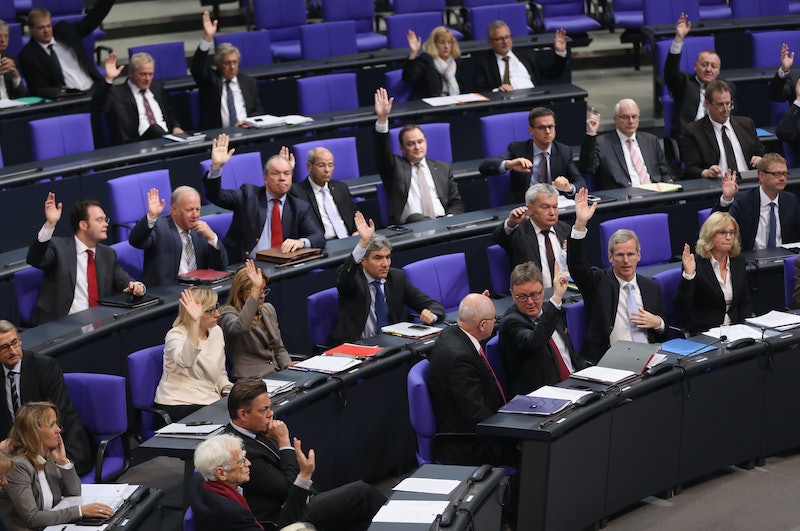 Someone recently told me that he won't be voting since nobody's vote really matters. Let me be clear, he's not right — but he's not totally wrong. What he was (somewhat irresponsibly) referring to was the difference between the popular vote and the electoral vote. Contrary to the common black-and-white understanding of what a democratic vote would suggest, in the American system, we do not elect our president based purely on which candidate gets the most votes at the polls — the deciding county comes from an electoral vote. So, what's the difference between the popular vote versus the electoral vote?

The popular vote is the total number of votes a candidate receives from the cohort of people casting their ballots. In the first round of vote-counting, a state counts each vote and determines which candidate is most "popular" by who receives the most votes overall.

However, the candidate who receives the support of the most number of American voters doesn't necessarily become president. In fact, that has happened a handful of times in U.S. history, most recently and, arguably, infamously in 2000 when Al Gore won the popular vote but lost the presidency to George W. Bush.

Here's why that is the case: Some of the United States' founding fathers, frankly, didn't trust the people when it came to picking the president. Others had more faith and argued that the election should be based solely on ballots cast by voters (who were going to be limited to white, male landowners, anyways).

As Stanford University historian Jack Rakove explained, the framers of the U.S. Constitution had "no obvious model of what a national republican executive would be." At the time, "The most obvious alternative was to have the president elected by Congress. But the framers also wanted an executive who would be both independent of Congress and a check upon it." However, the popular vote option also caused concern, according to Rakove, who noted, "the framers worried that a popular vote would then center on provincial candidates."

The founding fathers eventually landed somewhere in the middle and settled on the Electoral College. Under the electoral college system, voters in each state vote for electors who then elect the president. The electors are supposed to be an expression of the popular vote. However, there can be "faithless electors" who break away from voting for the candidate they are pledged to — and most states don't have laws prohibiting this situation.

Moreover, even when electors remain loyal, in the vast majority of states, electors are allocated on a winner-take-all basis. If a candidate narrowly wins a state — say by the 537 votes Bush won Florida in 2000 — that candidate gets all of the state's electors. If there are a lot of close wins, the Electoral College makes it certainly possible that a candidate can win the popular vote but lose the electoral vote.

However, that has only happened four times in American history — and based on the latest polls, 2016 won't prove to be so tight.