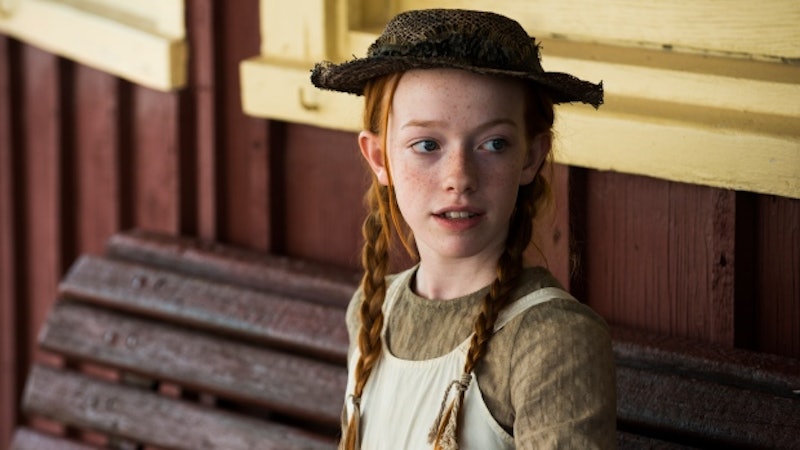 Pour yourself a nice tall glass of raspberry cordial, because Netflix's adaptation of Anne Of Green Gables has found it's lead. As reported by TVLine, newcomer Amybeth McNulty has been cast as Anne in the series adaptation of L.M. Montgomery’s classic and much beloved story. Considering she won the role over 1,800 actresses, I feel pretty confident that McNulty must be more than perfect for the role of the young, feisty redhead Anne. But, who is McNulty?

Well, according to McNulty's official Twitter page, she's 14 years old, and she describes herself as "very small" and an "Irish Canadian." Having enjoyed minor roles in two TV shows (an Irish drama called Clean Break and the British comedy-drama Agatha Raisin), McNulty's biggest role to date was in this year's sci-fi horror film Morgan (where she played the younger version of the titular character, who was played by Anya Taylor-Joy). So, all in all, it seems as though Anne Of Green Gables could well be this young actress' breakout role.

In a statement given to CBC News, McNulty divulged that, as well as being a "bookworm" who read the Anne Of Green Gables books when she was nine, that the actress also thinks she shares many of the iconic heroine's most famous traits:

She has so much love for the world, which I think I share with her. And her curiosity about everything, how she can be so fierce and so bold but so gentle and so loving.

Um, sounds pretty perfect if you ask me. McNulty definitely looks the part, so considering she also loves the source material and has a stunning understanding of the complexities to the character (seriously, Anne was one of my heroes as a kid for good reason), I think she's going to absolutely nail the role.

Showrunner and writer Moira Walley-Becket further praised the young actress, according to Deadline, by stating how McNulty "embodies all of Anne's qualities ... she's soulful and inquisitive, mercurial and passionate" making her perfect in the role of Anne for a "new generation."

Set in the late 1890s, Anne Of Green Gables focuses on Anne, an orphan, who survives an abusive childhood to transform an entire small town with her fantastic imagination, smarts, and indelible spirit. The Netflix adaptation of the story will feature eight episodes, in which McNulty will star alongside Geraldine James (The Girl With the Dragon Tattoo) and R.H. Thomson (Chloe) as the aging sister and brother (respectively) who take Anne in.

And obviously, I simply can't wait to relive my childhood via the show when it eventually premieres on Netflix (at an as yet undisclosed time).

More like this
Another Side Of Rupert Grint
By Maria Sherman
At 28, Rosie Perez Risked Her Career To Stop Playing Stereotypes
By Gabrielle Bondi
Here’s Everything Coming To & Leaving Netflix In February
By Jake Viswanath
Adam Ali Hopes 'Waterloo Road' Will “Subvert” Queer Misconceptions
By Sam Ramsden
Get Even More From Bustle — Sign Up For The Newsletter
From hair trends to relationship advice, our daily newsletter has everything you need to sound like a person who’s on TikTok, even if you aren’t.