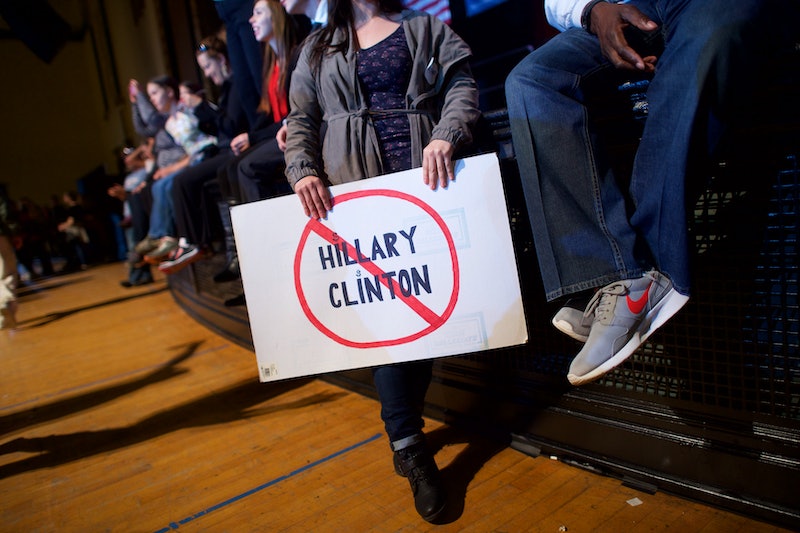 Donald Trump has been pushing the message that this year's presidential election is "rigged" against him. Because of that, just half of Republicans would accept a Clinton victory on Election Day, a new Reuters/Ipsos poll has found.

As his campaign slipped in the polls earlier this month following allegations of sexual assault, Trump warned supporters that Hillary Clinton was working in collaboration with non-white voters and the media to steal the election from him. Recently, Trump has implied he might not accept the results of the election unless he wins. As unprecedented as Trump's message has become, it's beginning to catch on with Republican voters.

"Hillary Clinton should have been prosecuted and should be in jail," Trump has tweeted. "Instead she is running for president in what looks like a rigged election." Rigged. It's a word Trump often uses when talking about the election, and there's little doubt about what he means. "The election is absolutely being rigged by the dishonest and distorted media pushing Crooked Hillary — but also at many polling places — SAD," he tweeted.

In a survey of 1,192 American adults from Oct. 17 to 21, Reuters reportedly found Republicans evenly split when it came to whether or not they'd accept Clinton as their president. Across the aisle, seven out of 10 Democrats said they'd accept the results of the election if they pointed to a Trump victory. It's not exactly surprising that Trump's rhetoric of a rigged election — a message even many GOP legislatures have sought to refute — has gained ground with his supporters given the longstanding concerns over voting rights and issues.

While the extent of Trump's accusations may be unprecedented for a presidential candidate, this is hardly the first time allegations of "widespread voter fraud" have entered the political discourse. Both the Florida recount of the 2000 election between Al Gore and George W. Bush and the 2004 election between President Bush and John Kerry spurred some talk of rigged voting.

However, Trump seems to be stirring up far more suspicion of illicit voting now than ever before. Things have reached such a fever pitch that on Oct. 20, Russia offered to send over polling monitors to help oversee the election.

A reported 70 percent of Republicans said they believed a Clinton victory would be the result of "illegal voting or vote rigging," according to Reuters poll. Nearly eight out of 10 Republicans expressed concerns about the accuracy of this election's vote count, with six out of 10 claiming to believe their vote will be counted accurately. Conversely, just six out of 10 Democrats claimed to be worried about the accuracy of the vote count and eight out of 10 were confident their vote would be counted accurately.

Yet evidence of this so-called "widespread voting fraud" has never been found. In general, primary, special, and municipal elections held over the last 16 years there have only been 31 credible reports of voter impersonation out of more than 1 billion ballots cast, according to Justin Levitt, a professor at Loyola Law School, who tracks incidents of voter fraud.

Despite no evidence to support his claims the election is being rigged against him — claims that serve only to undermine America's electoral and political systems — Trump has managed to goad his supporters into dangerous talk of an insurrection should he not win.