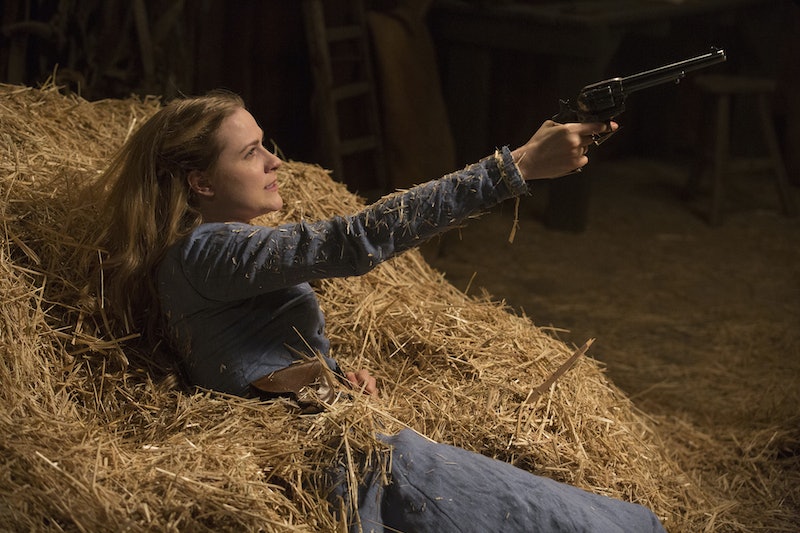 When it comes to discussing the deeper layers of meaning in HBO's Westworld , it should come as no surprise that the inspirations for one the show's leads, Dolores, are various and enlightening. Played by Evan Rachel Wood, Dolores is a rancher's daughter who is destined to venture into town every day. From there, her life can change depending on who she may interact with, although we've seen that her default storyline is to link up with her gunslinger beau, Teddy. It's been revealed to us that Dolores is the oldest host (i.e. sentient robot) in Westworld, an original still in her functioning prime. While Dolores is slowly transitioning to a kind of sentience that draws her out of a predestined narrative, viewers will see that there are other influences at work that can help signpost what her arc actually could be in Westworld.

Co-creator Jonathan Nolan recently revealed that the cultural and artistic references to Dolores are varied but each source of inspiration could be the key to unlocking how we understand what Dolores is going through. One of the major inspirations for crafting Dolores was Andrew Wyeth's painting, "Christina's World," as well as Alice in Wonderland.

"It was a tilt of the head toward all the different stories that inspired us; a classic protagonist who’s on a hero’s journey with a darker twist to it. She starts in what should be the happy homestead but it’s not and she goes out looking ultimately for herself."

As one half of the Nolan team behind multi-layered puzzlers like Inception, I'm not surprised in the least that even the source references for one of the most interesting characters in Westworld are incredibly meaningful.

Both "Christina's World" and Nolan's other big inspiration for Dolores, Alice in Wonderland, not only give us a better sense of who Dolores is but we also get better insight into what is compelling her to deviate from the theme park script. The latter has already been brought into the actual show: those private conversations between Bernard and Dolores have involved discussions of Alice's adventures. Dolores and Alice both wear blue dresses, have blond hair, and a mixture of worldly life experience with wide-eyed innocence that regularly contribute to their survival in their own respective stories. Similarly, both are somehow strangers in their environments yet eerily comfortable in their settings.

The worlds Dolores and Alice inhabit are not entirely unlike are own but both women know, somewhere deep in their consciousness, that something is not quite right and like Alice, Westworld is setting Dolores up to go on a life-changing adventure that deviates from the script that has been written for her. As was demonstrated in Episode 3, "The Stray," Dolores is already off the well-trod narrative, having shot another host with the gun she found and riding off into the night until she was too tired to carry on. If Dolores continues along in this Alice-like path, then we know that it will be a journey of total self-discovery and Dolores may find herself making choices she was never programmed to make. With strong hints at plague of sentience sweeping through the hosts of Westworld, Dolores' own awakening recalls Alice's own strange coming of ages in Wonderland.

The reference to Wyeth's "Christina's World" is a bit more puzzling but still very revealing. A much more grounded reference that Alice in Wonderland, "Christina's World" is a plain-spoken artwork that instills a level of comfort and it's clashing ideology, yearning. In the portrait, Christina is a young woman who has ventured too far away from her country house and appears to be crawling back, reaching towards it. The Westworld connection evolves thus: the painted woman is polio-stricken, struggling against physical odds to return to the place she knows and loves; Dolores' own robotic pathology could help or hinder her own quest to grapple with her growing independent consciousness and possibly prevent her from ever returning to the safe confines of her own ranch and the carefully constructed storyline that controls it.

What both inspirations signal to me is that Dolores is clearly meant for and involved with bigger moving pieces in Westworld. She has always been telegraphed as a heroine; with Alice in Wonderland and "Christina's World" serving as the bedrock for her character, we can better understand that she is destined to truly shake up her own world and those who are involved with her. Dolores could very well be the key to unlocking the secret of Westworld. Lucky for us, we now have a few keys to better unlock who Dolores truly is as a central character.

More like this
Reese Witherspoon Gave Fans Hope For 'Legally Blonde 3' After This Surprising Movie Inspired Her
By Jake Viswanath
Josh Peck Shows Love To Jennette McCurdy After Her Shocking 'iCarly' Revelations
By Radhika Menon
At 14, D'Arcy Carden Was Sneaking Out To Parties & Crying Over Kurt Cobain
By Ivana Rihter
Lisa Kudrow Explained How Her Body Image Changed While Filming 'Friends'
By Grace Wehniainen
Get Even More From Bustle — Sign Up For The Newsletter