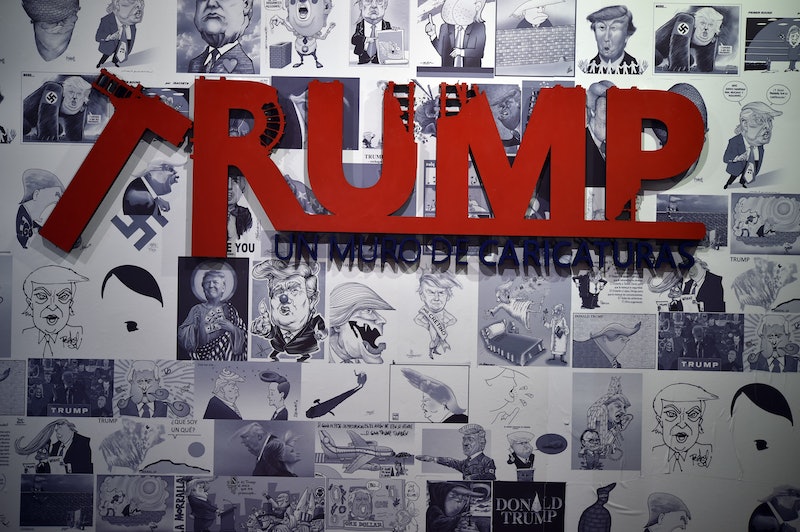 Donald Trump, the smart and efficient businessman, knows where to cut corners. Donald Trump, the hypothetical leader of the free world who wants to paradoxically wall off that free world, also knows how to save a buck or two. As president, Trump would make Mexico pay for his proposed wall along the southern border of the United States, but there's one catch: the U.S. would front the bill and Mexico would reimburse us. This was a sudden, blatant change from his previous anti-immigration plan, especially right before the election.

In a major speech on Saturday, Oct. 22, Trump laid out his plans for the first 100 days of his presidency, and they were a bit different from the rhetoric he has espoused over the last 16 months. Notably, Trump indicated that Mexico would fully reimburse the United States for the construction of the infamous border wall between the two nations. The hypothetical wall is part of Trump's "End Illegal Immigration Act," which he has touted since the start of his campaign.

According to Trump, the act "fully funds the construction" of the wall along the southern U.S.-Mexico border. "Don't worry about it. Remember, I said Mexico is paying for the wall," Trump said on Saturday. He added: "With the full understanding that the country of Mexico will be reimbursing the United States for the full cost of such a wall."

Trump also mentioned his August meeting with Mexico President Enrique Peña Nieto, in which they reportedly discussed the proposed wall. Following that August meeting, the Mexican president claimed he told Trump that Mexico would never fund the construction of a wall between Mexico and the United States. "At the beginning of the conversation with Donald Trump I made it clear that Mexico will not pay for the wall," Peña Nieto tweeted in August.

"By the way, I met with the president of Mexico," Trump said on Saturday. He told the crowd that Peña Nieto was a "wonderful person," but he did not bring up the fact that Peña Nieto seems adamant about not funding or reimbursing the wall.

Illegal immigration has of course been one of the leading campaign planks for Trump, who has promised an extreme crackdown on undocumented citizens entering the United States. Lately, he's been using undocumented citizens as part of his narrative about a rigged election. "You look at certain areas of the country in terms of the voters and the booths and everything else and what’s taking place, and illegal immigrants voting and people that have died 10 years ago voting," Trump told Fox News earlier this week.

Everyone has been expecting an eventual pivot from Trump, but it was surprising to see the way in which he fundamentally changed the plan of his proposed border wall (especially with less than three weeks until the election).