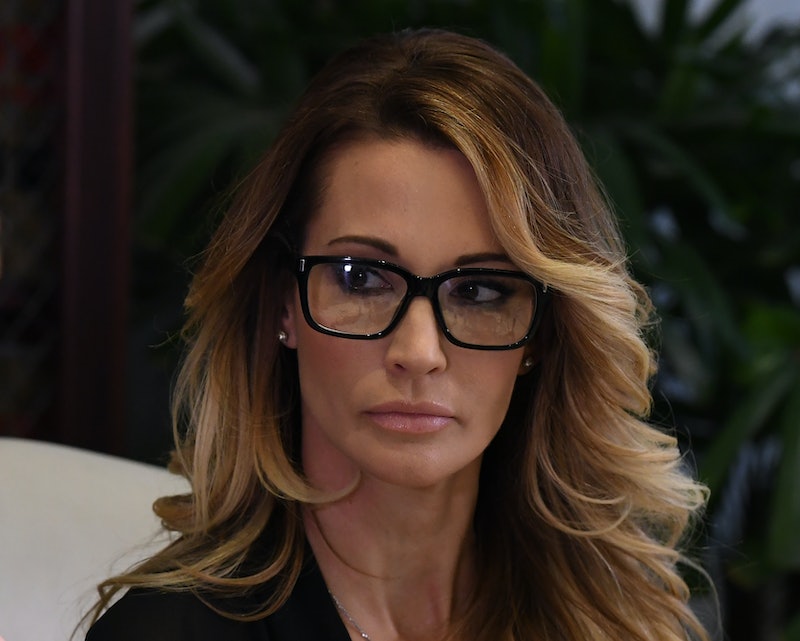 On October 22nd, after a disastrous couple of weeks for the Donald Trump presidential campaign ― marked by a disastrous final debate performance, and a slew of sexual assault allegations ― an 11th woman has come forward to accuse the GOP nominee. Her name is Jessica Drake, an adult film star who alleges that Trump kissed her without consent and tried to pay her $10,000 for sex back in 2006, after meeting the tycoon at a golf tournament in Lake Tahoe. And, as the criticisms and smears start flying, remember: Drake being a porn star doesn't remove consent from the equation, because people who work in sex industries are human beings with agency like everyone else.

For the record, while the Trump campaign did not respond to Bustle's request for comment, it has flatly denied Drake's allegations (as well as those of the ten other women who've recently come forward), and Trump himself publicly threatened to sue his accusers mere hours before Drake went public.

If you take a brief stroll through the world of pro-Trump Twitter accounts, you won't have to look very hard to find some grossly predictable attacks directed at Drake. Suggesting that she must be lying, or shouldn't be taken seriously because of her choice of career. If she's willing to have sex on film professionally, so the thinking seems to go, then she must not have actually been that bothered by a man kissing her without her consent. It's the same logic that sexual abuse apologists have used for generations, implying or outright arguing that sex workers can't be raped or assaulted. You need look no further than Fox News anchor Brit Hume's response to Drake to see an example of this attitude in action.

There seems to be a tension among Trump loyalists on social media whether to believe Drake's story and simply regard it as no big deal, or whether to paint her as a nefarious attention-seeker, like Trump himself has when referring to some of his other accusers. Some of the tweets flying around about this are frankly too lurid and disgraceful to be embedded here, but you can see for yourself without too much trouble ― all it takes is typing Drake's name into a Twitter search, along with the Trump campaign's hashtag of choice, #MAGA.

Make no mistake, like any woman who comes forward to accuse a powerful and prominent man of sexual misconduct, Drake is going to come under an intense amount of scrutiny ― frustrating though it may be, allegations of sexual assault tend to focus a lot of disbelieving scrutiny on the accuser, more so than people who allege they're the victims of other, non-sexual sorts of wrongdoing.

But in that conversation, there should be absolutely no room for any suggestion that Drake's career makes her less credible, or her story less worthy of consideration. When Drake performs in an adult film shoot, she's doing her job, a profession which she's chosen, and which she fully consents to participate in. And regardless of whether you're inclined to believe her story ― a story which, for what it's worth, tracks with many of the other allegations against Trump, which have largely centered around him kissing and groping women in much the fashion he alluded to in that Access Hollywood tape ― that's not what she's alleging of her interactions with Trump.

Drake seems to understand all too well the kinds of attacks that are headed her way, as she described during her emotional statement alongside attorney Gloria Allred.

I am not looking for monetary compensation. I do not need additional fame, or the type of attention that this is sure to bring. I understand that I may be called a liar or an opportunist. But I will risk that in order to stand in solidarity with women who've shared similar accounts that span many, many years.

While it remains to be seen whether Drake's allegations tilt the scale at all as far as public opinion is concerned, this much should always stay crystal clear: consent isn't something that can be assumed just because of someone's choice of career, and anyone who tries to tell you otherwise is sorely, sorely misguided.

More like this
Courteney Cox Doesn't Remember Filming 'Friends'
By Jordyn Tilchen and Sam Ramsden
Beyoncé & Madonna’s “Break My Soul” Remix Honors A Group Of Black Icons
By Stephanie Topacio Long
Christina Aguilera Took A Powerful Stand At Brighton Pride
By Sam Ramsden
Are John Legend & Kanye West Still Friends? The Singer’s Latest Update Is Candid
By Brad Witter
Get Even More From Bustle — Sign Up For The Newsletter