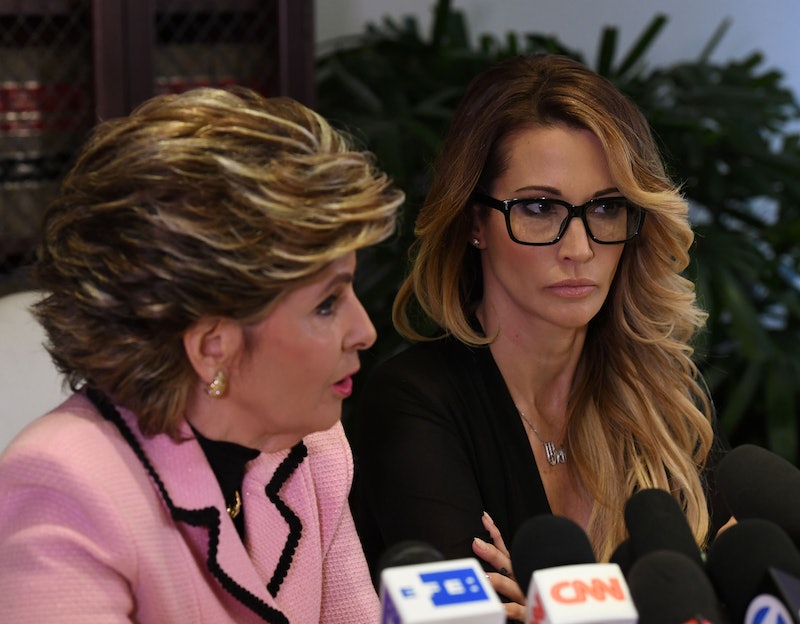 According to Drake, Trump allegedly approached her at a golf tournament in 2006 and offered her $10,000, as well as the use of his private plane if she would return with him to his room and then attend a party with him. This comes on the heels of a leaked recording of Trump in 2005 saying that he could use his fame to grab women "by the pussy." Though Trump has not responded to Bustle's request for comment, his campaign directly responded to Drake's allegations with a statement denying her claims:

This story is totally false and ridiculous. The picture is one of thousands taken out of respect for people asking to have their picture taken with Mr. Trump. Mr. Trump does not know this person, does not remember this person and would have no interest in ever knowing her. This is just another attempt by the Clinton campaign to defame a candidate who just today is number one in three different polls. Anyone who would pay thugs to incite violence at a rally against American citizens, as was released on video, will stop at nothing. Just another example of the Clinton campaign trying to rig the election.

Seemingly spurred by Trump's 2005 Access Hollywood hot mic tape remarks, a slew of women have come forward to allege that Trump had sexually harassed them in some way. Drake is only one in 11 women who have come forward since the comments came to light earlier this month. Trump has denied each woman's allegations entirely. On Saturday, he even threatened to sue his accusers.

The following are Drake's full remarks at her press conference on Saturday:

Ten years ago, I was working for Wicked Pictures, an adult film company, at a golf tournament in Lake Tahoe. I was at Wicked's booth when I met Donald Trump in the celebrity gift room early in the morning before he teed off. He flirted with me and invited me to walk along the golf course with him, which I did. During that time, he asked me for my phone number, which I gave to him. Later that evening, he invited me to his room. I said I didn't feel right going alone, so two other women came with me. In the penthouse suite, I met Donald again. When we entered the room, he grabbed each of us tightly in a hug and kissed each one of us without asking permission. He was wearing pajamas. A bodyguard was also present. He asked me about my job as an adult film star, about details on shooting porn, and he asked us about our personal relationships and whether we were married or single. We answered his questions. It felt like an interview. About 30 or 45 minutes later, we left his room. After I returned to my room, I received a call from a man calling on Donald's behalf. He said Donald wanted me to come back upstairs to Donald's suite. I indicated I did not wish to return. Then Donald called. He asked me to return to his suite and have dinner with him. He also invited me to a party. I declined. Donald then asked me, 'What do you want? How much?' I told him I couldn't, because I had to return to LA for work. I said that as an excuse, because I didn't want him to continue asking me and I didn't want to be with him. After that I received another call from either Donald or another man calling on his behalf offering me $10,000. I declined again and I once more gave as an excuse that I had to return to Los Angeles for work. I was then told that Mr. Trump would give me the use of his private jet if I would only accept his invitation. I did relay my experiences immediately afterwards to some friends. Out of respect to the other parties involved, and their families, I will not share their names. I am choosing to share my personal exchange in light of the recently released tapes, in order to lend my voice, my strength and my support to the other women who are coming forward. Collectively, his words and his actions are huge testament to his character, that of uncontrollable misogyny, entitlement and being a sexual assault apologist. This is not acceptable behavior for anyone, much less a presidential candidate. And I realize in this situation I may be but a tiny grain of sand, but clearly this is an enormous beach. I am not looking for monetary compensation. I do not need additional fame or the type of attention that this is sure to bring. I understand that I may be called a liar or an opportunist, but I will risk that in order to stand in solidarity with women who share similar accounts that span many years. Thank you.