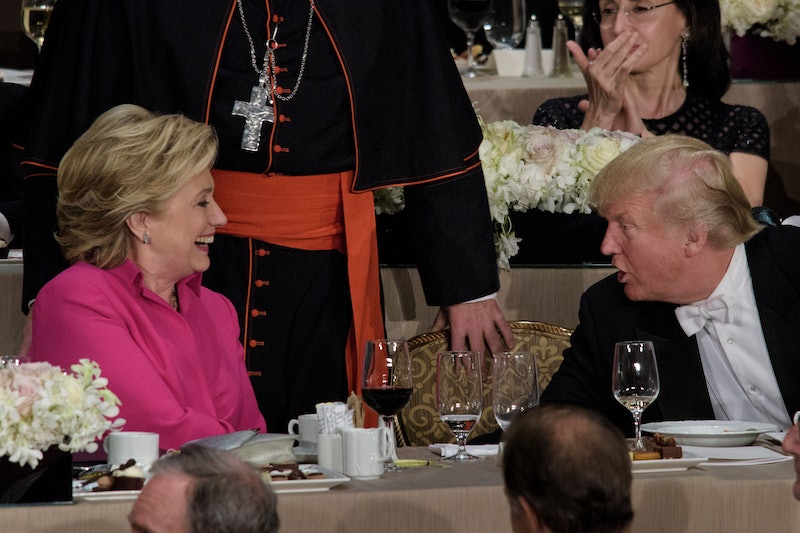 How do you predict what has seemed to be the most unpredictable presidential election in recent U.S. history? According to experts, you look at the electoral college, foreign policy records, and how charming a candidate is. Taken as a whole, the various predictions for who will win this year's presidential election show that the race between Hillary Clinton and Donald Trump is actually just as unpredictable as you thought.

This time last year, it probably seemed highly unlikely that Trump would beat out a pack of career Republican politicians to win the GOP's nomination. It also seemed like talk of Clinton's email woes could lose her the Democratic party's nomination. Talk of Clinton's emails hasn't yet quelled, but she and Trump both accepted nominations over the summer, becoming two of the most polarizing presidential candidates to face off in recent elections.

Their approaches to the campaign are completely different: Trump positions himself as an outsider, someone who can head to Washington, D.C. to fix what past administrations have muddied. Clinton, on the other hand, positions herself as a continuation of President Obama's status quo, vowing to preserve, but optimize, many of the policies he put into place. Now, it seems that their differing approaches have led to wildly different predictions ahead of November's election.

According to The Washington Post, American University professor Allan Lichtman has successfully predicted the winner of the popular vote in every presidential election since 1984. To make a prediction, Lichtman relies on 13 key factors, including whether or not the incumbent is running and the charisma of the candidates. This time around, he told the Post, Clinton doesn't have the charisma and Democrats don't have the incumbency advantage to pull out a win.

According to POLITICO, several researched studies have demonstrated that taller candidates have an advantage over shorter ones. If that trend holds true, Trump is a shoo-in, standing at more than 6 feet tall. That said, there has technically never been a female nominee to compare to the male nominees, so the trend may be flawed.

On Wednesday, Starbucks CEO Howard Schultz told CNN, "I am confident that Hillary Clinton will become the next president of the United States." The Starbucks CEO's prediction lines up with many of the nation's polls, but it could be biased by his preferences. Schultz endorsed Clinton back in September.

The state with the most electoral votes — 55 — will have a Trump-esque "yuuuuge" impact on the results of the election. RealClearPolitics' average has predicted over and over again that Clinton will win California. Not to mention, FiveThirtyEight's state-specific prediction for California put Clinton's chances of succeeding in the state at 99 percent.

Former CIA operative and United Nations volunteer Evan McMullin launched his campaign in August. In just a short time, he has given Utah Republicans, particularly Mormons, a more palatable conservative option than Trump. McMullin could win the traditionally red state and, with any luck, block either major-party candidate from reaching the required 270 electoral votes.

Not only is Ohio considered an important swing state, but it is also eerily good at predicting presidential elections. More often than not, Ohio voters select the candidate who ultimately takes office. Ohio's electoral college votes went toward Obama in both 2008 and 2012, but 2016 seems to be more competitive. Clinton and Trump remain in a tie that could be too difficult to predict, but some polls, including the latest RealClearPolitics average, show Trump with a slight edge.