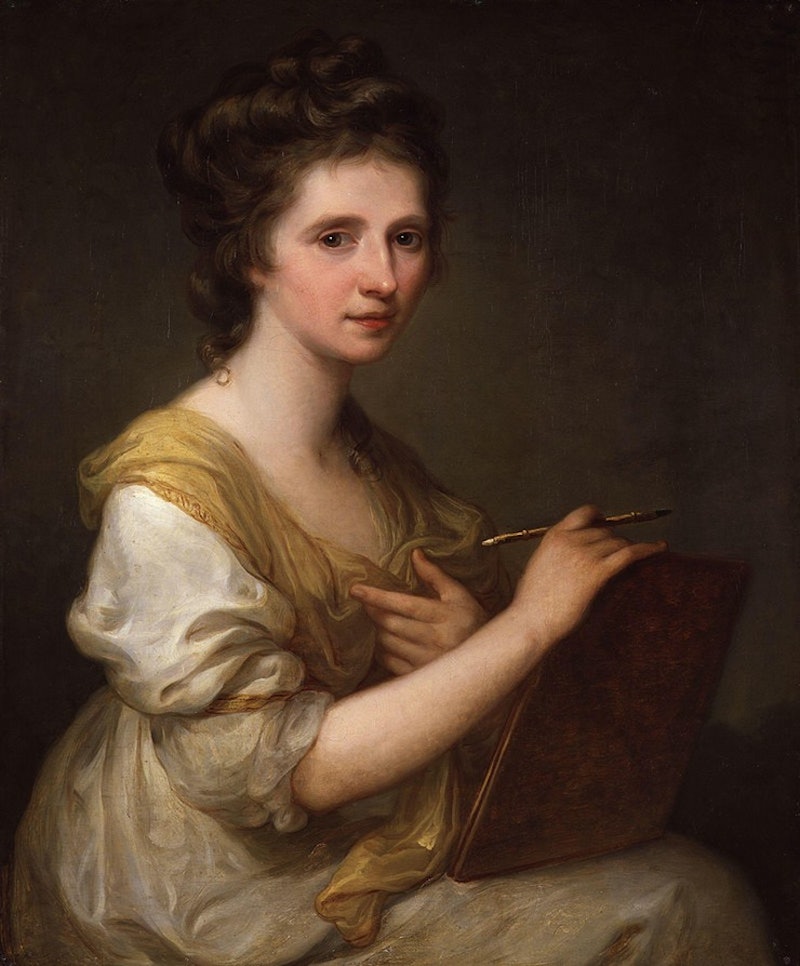 Today, October 25, marks a holiday you may not know about — International Artist Day, which is a good time to celebrate all aspects of the artistic life, from promoting up-and-coming artists to giving props to those whom history forgot. But there's another area to the art world, particularly in modern times, that's been increasingly expanding: the phenomenon of the child prodigy artist. Although child prodigies have obviously been around for centuries, the rise of "viral" fame has given many young kids the potential to be celebrated as the next great artistic hope while they're barely out of diapers. You've probably seen some of them: Aelita Andre, the Australian who became a toddler sensation just a few years after her birth in 2007, is one of the prime examples. And then there's Marla Olmstead, who was the subject of a 2007 documentary, My Kid Could Paint That , which raised doubts about whether she was really completing her paintings by herself.

Child prodigies are an intriguing subject. For every celebration of their precocious talent, there are accompanying worries: are they being exploited? Is their achievement genuine or helped along by adults? Are we being duped? Are they going to be effective humans with well-adjusted social skills and healthy ideas about failure when they grow into adult ex-prodigies? (Full disclosure: I took part in various studies on prodigy children as a kid, so I know more about this than the average observer.) Our fascination with them is both understandable and riddled with undercurrents of suspicion and concern.

If we follow examples from history, though, young artists can grow up to be adult artists of phenomenal renown; it's not all about hitting a crisis once you turn 18 and throwing away paintbrushes melodramatically. From royal patronage to home-schooling, these five examples of child artistic prodigies in history give an intriguing look at why we've always been so fascinated by the idea of talent in the young.

Wang Ximeng is responsible for one of the most famous pieces of art in Chinese history: the beautiful scroll "A Thousand Li Of Rivers & Mountains," which is almost 12 meters long and made out of silk. The life of Wang Ximeng himself is no less extraordinary; the classic was painted when he was just 18, a teenager in the Northern Song Dynasty, and his talent was apparently fostered by Emperor Huizong himself, who was a painting aficionado.

However, we know precious little about Wang's life beyond the production of the "Thousand Li" and the fact that this precocious artist died at the age of 23. The painting itself is currently displayed at its full length, but art scholars have argued that it should be unrolled from right to left, gradually, to give its proper impact.

If you were anybody among European royalty in the 18th and early 19th centuries, you had to have your portrait done by one of the great prodigies of the age: Angelica Kauffman. Born in Switzerland, Angelica was rapidly recognised as an artistic prodigy and was painting portraits of bishops by her early teens. She made her real impact as a potential portraitist for the elite when, at 13, the Duke of Modena in Italy asked her to paint his wife, and was so pleased with the result that he kick-started her popularity among royalty. To be painted by Kauffman became a sign of high class.

She hardly had a low-profile later life, either: she spent her entire artistic career being sponsored by royal families around Europe, and was one of only two female founding members of the Royal Academy, the most prestigious British art society.

It's difficult to look at Picasso through any lens except his amazing later output, but he was, unsurprisingly, a serious artistic early starter, one of the most astonishing in history. Before cubism and Les Demoiselles D'Avignon, he was getting a reputation in Malaga, Spain as the boy who could "draw before he could talk," reportedly outclassing his father, an art teacher, by the age of 13 and prompting the highly astonished parent to give up all his art materials to his young son.

He managed to get accepted to Barcelona's School Of Fine Arts at the age of 14 thanks to an extraordinary portfolio that he reportedly completed in just one day. The case of Picasso is actually often used to demonstrate that child prodigies in art can actually have a long-lasting, influential career, rather than just being a novelty or flash in the pan.

Akiane, usually referred to without her last name (Kramarik), is likely the most famous of the child prodigies that have emerged in the modern world. Part of this was because her painting and artistic production, which began at the age of 4, was extremely religious, based on "visions" that caused her to make artwork like "Prince Of Peace," a very detailed painting of Jesus. This caused the American Christian community to claim her for their own, and her atheist parents to convert,. She was also interviewed by Oprah and the Washington Post. (Her ecstatic visions of heaven have led her to be compared to the medieval polymath Hildegard von Bingen, who also created great reams of art after being inspired in the same way.)

Akiane is still working, and gave an interview to the Huffington Post earlier this year, but her website on religious art hasn't updated with new images for four years, since she was 18.

The British wunderkind Kieron Williamson first hit headlines at the age of 6 in 2010, when his first exhibition sold out in minutes and broke sales records. His reported wealth from painting sales grew to around £1.5 million by 2013, when he was just 10. His mother told the BBC at the time that "it's a nightmare to be honest, a big ethical and legal nightmare" to keep Williamson safe from exploitation and capable of enjoying his childhood. Williamson, dubbed the "Mini-Monet" by the British press, specializes in watercolors of the countryside, has a huge following among collectors and has been taken out of school to be educated at home by his parents to give him better artistic opportunities. In June this year, his earnings hit £2.5 million, and he's just been the subject of a BBC documentary, "The Making Of A Master," all at the grand old age of 14.