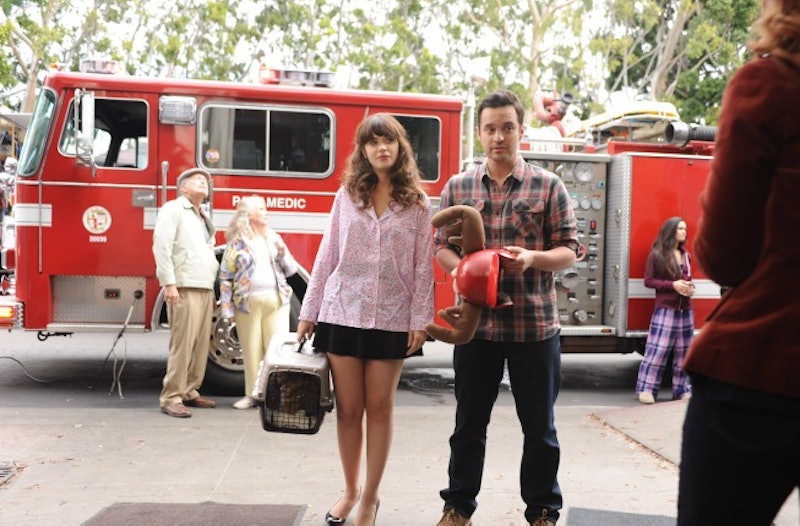 Well, it happened. The center plot in this week's New Girl episode, "Mars Landing," seemed inevitable. In fact, the fate of it seemed sealed from that kiss heard 'round the world last January. Nick and Jess would always be wildly different, and they would always be characters living in a sitcom world. In the grand tradition of Ross and Rachel and Sam and Diane, Nick and Jess broke up, like they were always meant to.

Let it be known here and now that I in no way expect this to be the end of Nick and Jess. They'll explore the dynamics of them still living together and trying to deal with the fallout of breaking up while remaining friends. They'll start tentatively dating other people potentially more similar to them, and it will be furiously awkward. And then, sometime far down the line, after a whole lot of character development has taken place, they'll probably fall back together. These aren't just shipping fantasies; sometimes it's just the television way.

The issues that broke Nick and Jess up this episode are not new ones to their relationship — in fact, they're the very oldest ones in their relationship: Her idealistic views of love, marriage, family, life, butting up against his messy, weird, sometimes-located-on-Mars ones. They've always been very, very different people. That's part of what made them work.

The thing that allowed me to go into this episode not expecting it to end in a breakup — despite expecting from episode one of this season that the pair would split by season's end — was the fact that the season so far has been, when it came to their episodes, nothing but story upon story underlining the things that worked about them. They were and are very devoted to each other, very secure in their feelings and their commitment to each other, and that came across very well this season even when the show, as a whole, was struggling.

And in this episode it was, ironically, that same commitment to each other that broke them up. "I want you to be able to be you" was the gist of it. They didn't want to bite their tongues to avoid fights, and they wanted to allow each other the space to keep being themselves because it was exactly those selves they fell for in the first place. And while they were added they wanted to make sure that they could still stay friends at the end of it.

Not that many sitcom couples inspire the kind of romantic analysis these two do in me. Maybe it's the chemistry, maybe it's that Nick is so weird and Jess is so weird and their weirdness seems to mesh in cool and interesting ways. And I, personally, don't need them to be together right now, or potentially ever — though I do believe their character writing points to a reunion down the line. All I need is for this show to show the same commitment to knowing who it is as Nick and Jess have to knowing who they are. And the next few episodes will show us just that.