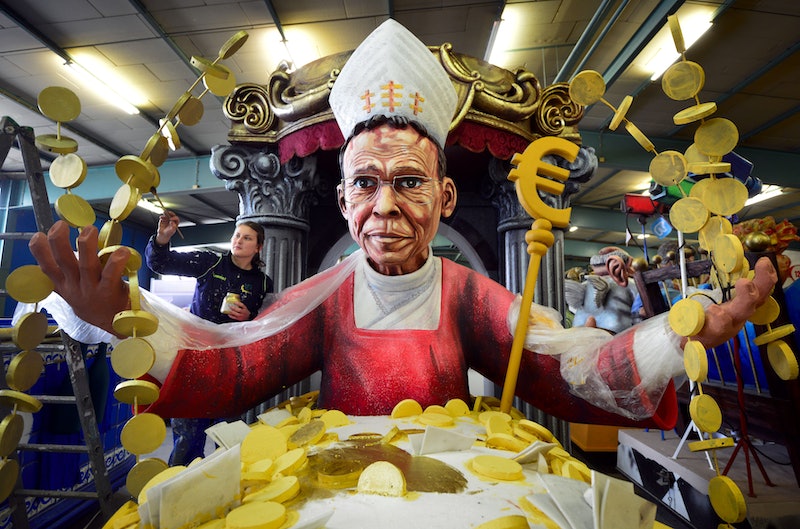 Pope Francis removed the infamous "Bishop of Bling" from his post Wednesday, finally accepting the resignation of Franz-Peter Tebartz-van Elst. The German bishop was expelled for good from his Limburg diocese following an inquiry into his lavish spending habits: The clergyman had a $43 million home, which included costs of $20,000 renovations on a bathtub, and had $35,000 for a conference table.

The Vatican's statement noted that the pope hoped Limburg residents would accept the decision with “docility and willingness to rediscover a climate of charity and reconciliation.” (While Tebartz-van Elst lounges in his renovated bathtub, presumably.)

Tebartz-van Elst's lifestyle didn't exactly jibe with the Pope's stance on modesty. One of the new Pope's reigning themes is the call for humility, with Francis ditching the luxury cars and the famous red leather shoes of his predecessors. In addition to the costs of his home, Tebartz-van Elst reportedly lied in court about flying first class to, erm, visit the poor in India.

The Vatican temporarily suspended him in October whilst examining the details his extravagance. Pope Francis was clearly irked by his actions, making him wait a week before meeting to discuss the issue.

And the bishop's explanation? The expenses were actually the total cost of 10 projects, he said, and his finances came from the fact that the buildings were under historical protection. That wasn't good enough for the Vatican, which initially found the big spender “can no longer exercise his episcopal duties." Tebartz-van Elst offered his resignation on Oct. 20, and on Wednesday the papacy finally obliged.

Tebartz-van Elst already has a replacement in Monsignor Manfred Grothe, and the Vatican said that the former bishop would get a new job "at the opportune time."

And Germans weren't afraid to criticize their former bishop, either: One of their carnival floats depicted a showdown between Pope Francis and Tebartz-van Elst, with the latter figure depicted in jewels while standing in a pile of gold coins. Subtle.

More like this
Where Was 'The Bachelorette' Season 19 Filmed? More European Destinations Are On The Way
By Radhika Menon
Why Eurovision 2023's Host City Won’t Be Revealed For A While Yet
By Sam Ramsden and Rachel Mantock
13 Photos Of Princess Charlotte Loving The Commonwealth Games
By Sam Rogers
Dunkin’s Pumpkin Spice Latte Is Officially Back This Week
By Mia Mercado
Get Even More From Bustle — Sign Up For The Newsletter