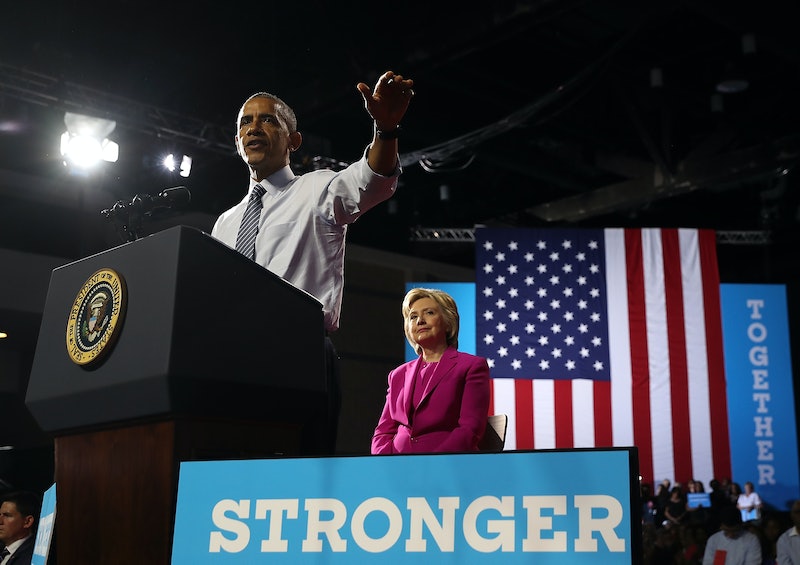 In the last few weeks before Election Day, President Obama is hitting the trail for Hillary Clinton in the swing states, and trying to solidify his legacy as a popular president at the end of his term. But that legacy is in precarious position, as his biggest legislative accomplishment. The healthcare law which Joe Biden called "a big f*cking deal" and which bears Obama's name is having some significant trouble.

On Monday, federal officials announced that rates for those who buy insurance through healthcare.gov will increase by an average of 22 percent in the year 2017, due largely to the pool of insured people being sicker than expected. That's a lot less than the "60, 70, 80 percent" increases that Donald Trump has been claiming, but it's still a pretty big jump compared to the 5.8-percent average yearly increase in healthcare costs since Obama took office, and even the 13.2-percent increases before then. In the words of a questioner at the second presidential debate, many Americans feel "the Affordable Care Act, known as Obamacare — it is not affordable."

Coming into office as president (which is looking increasingly likely based on the latest polls ), Hillary Clinton will have to deal with this problem. Unlike Donald Trump, who wants to repeal and replace Obamacare (though he's remained somewhat vague about an alternative plan), Clinton has insisted that Obamacare should stay — though she has admitted it must be adjusted to keep it working smoothly. Even as she defends the law, her husband has criticized certain aspects of it as "the craziest thing in the world."

Republicans have pounced on the latest hike as a sign of yet another Obamacare promise broken ("If you like your health care, you can keep it"). Trump is, no surprise, trying to use the hike to hit at Clinton. Realistically, I don't think this strategy will significantly chip away at Clinton's growing lead over Trump, but that doesn't mean she won't have to deal with Obamacare.

Now, many things about the law are still functioning mostly as intended — before the upcoming rate hikes, the costs of premiums under Obamacare were significantly lower than what was expected before the bill was passed, meaning the jump brings it more in line with projections. And with more than 8 in 10 enrollees receiving government subsidies to help pay for health insurance — and those subsidies increasing along with premiums — a large portion of those on Obamacare will not see as heavy a burden out of pocket.

But for the remaining portion of people who use Obamacare — wealthy enough to not receive government assistance but still feeling the crunch of rising healthcare costs — the current system is in need of serious fixing. There are potential fixes that healthcare wonks see — such as increasing penalties for not buying health insurance to spread risk around. But any changes would require effort from a brand-new Clinton administration to work with a likely Republican Congress, and come with the resultant headaches.

The Affordable Care Act may have been nicknamed Obamacare, but it's increasingly likely that Clinton will have to bear the burden of cleaning up the legislation.

More like this
What's New On Netflix: A Third '365 Days' Movie & Lili Reinhart’s New Film
By Arya Roshanian
Here's Our Ranking Of The Funniest 'Bachelor' Casting Ad One-Liners So Far
By Grace Wehniainen
Courteney Cox Doesn't Remember Filming 'Friends'
By Jordyn Tilchen and Sam Ramsden
Where Is Clayton Echard Now? The Former 'Bachelor' Star Is Dating Susie Evans
By Kadin Burnett
Get Even More From Bustle — Sign Up For The Newsletter