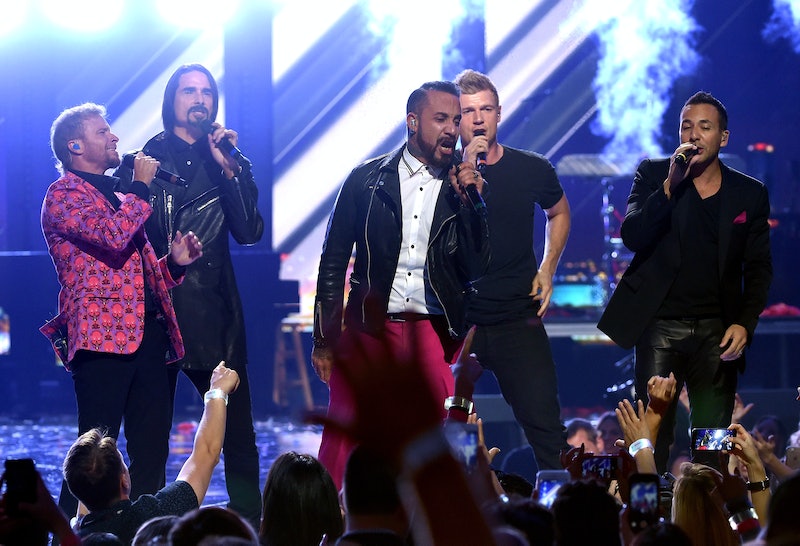 It’s been less than a month since the tickets went on sale, but BSB's Larger Than Life residency at Planet Hollywood already has got it going on— so much so, they went and tacked more shows onto the schedule. Praise the pop gods above, because as of this week, there are even more Backstreet Boys Las Vegas dates to choose from. “By popular demand,” the group's website announced on Monday, “after blowing out the first 18 shows, 8 more shows have been added!”

BSB didn’t just sell a bunch of tickets to their AXIS concerts. They blew out the first 18 shows. Whoa, that is no joke. But you know what? This "blowing out the first 18 shows" thing really shouldn't come as a surprise. It’s the Backstreet Boys, for the AJ McLean "Larger Than Life" cackle's sake. Of course their residency’s already crushing it. Fans may not know what the set list will look like or what the stage will look like or what the costumes will look like (I hope there are at least three fedoras), but fans do know that this will be a not-to-be-missed event.

If the March and June dates don't work with your schedule (or you're just clamoring to see BSB's Vegas show as many times as possible next year), the April dates may just be your fire. Your one desire. Believe me when I say I'm so amped for the Larger Than Life residence-ay.

The tickets for the new April dates will be made available to the public on Oct. 28, so set a reminder and bookmark the Ticketmaster site now. Come on, you don't want to miss this, right? And now that there are even more dates available, you have even less of an excuse to skip out what's sure to be a show for the ages. I mean, hi, it's the Backstreet Boys. Playing songs from their indubitable catalog. On the Strip. What's more fun than playing slots and riding roller coasters that are on top of resorts and and taking pictures with people in Minion costumes and eating at celebrity chefs' restaurants and seeing an iconic pop group in concert? I have a feeling Larger Than Life will never break fans' hearts, but it will make fans cry (tears of bliss).

More like this
Lizzo Twerks While Playing James Madison's 200-Year-Old Crystal Flute Onstage
By Radhika Menon
Everything To Know About Taylor Swift’s 10th Studio Album, 'Midnights'
By Grace Wehniainen and Jake Viswanath
Looks Like She Made It
By Lindsay Zoladz, Beau Grealy and Tiffany Reid
Twitter Is Freaking Out Over Rihanna’s 2023 Super Bowl Halftime Show Announcement
By Stephanie Topacio Long
Get Even More From Bustle — Sign Up For The Newsletter