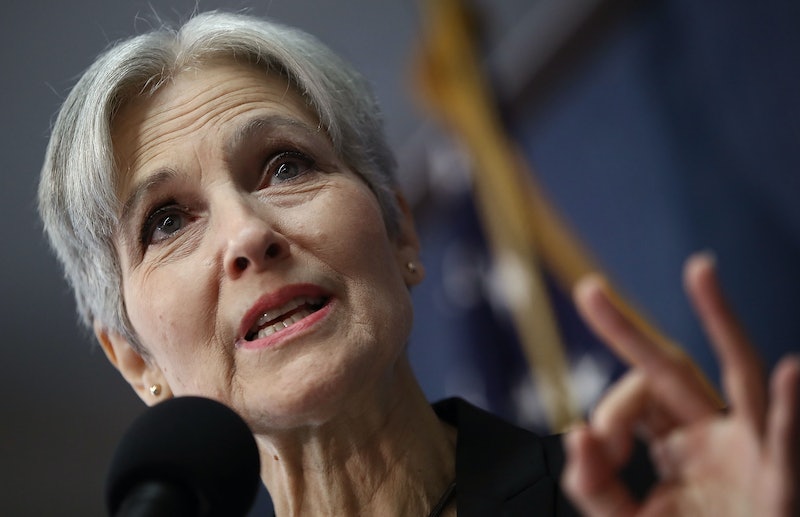 The 2016 presidential election is going down on Nov. 8, and it figures to be a historic day. Will the United States elect it's first female president? Will it decline to elect its first female president, and instead elect its most openly misogynistic one? There's no shortage of drama ahead, it suffices to say. But maybe you're feeling unhappy with both of the major party candidates, and you're thinking about a protest vote. So, really, should you vote third party on election day?

In the opinion of this writer, at least, the answer is pretty simple: no. You shouldn't, at least not if your logic is that you're hoping to send a message to the power-brokers of Washington that their two-party dominance is coming to an end. Simply put, the popular perception that voting third party "sends a message" is flimsy, at least from the perspective of actually influencing meaningful change. There's little to no evidence that the major parties have ever meaningfully adjusted their platforms to mitigate pressure from third-party performance in presidential races ― even under circumstances like in 2000, when Green Party nominee Ralph Nader's hard-charge for votes in Florida almost assuredly gave George W. Bush his narrow victory.

Furthermore, even in years when third-party candidates have performed unusually well, there hasn't been much in the way of long-term gains for non-Republican and Democratic campaigns in future years. The last time a candidate from outside the two major parties won a double-digit share of the vote was Ross Perot in 1992, when he notched nearly 19 points as an independent candidate. Nevertheless, he came in at just 8 percent in 1996, and the party he founded and ran for ― the Reform Party ― has been a tattered afterthought ever since.

Rather, there's a case to be made that if a third party hopes to puncture the "two-party duopoly," as Libertarian VP nominee Bill Weld calls it, it shouldn't even be focusing its attention on the White House right now ― certainly not parties as relatively anonymous and absent from state and local governments like the Libertarians and Greens. Even though it's easy to forget since the Democrats and Republicans have been around for so long, any power that political parties wield is forged from the ground up, not from taking wild pot-shots at impossible goals. The hope that some charismatic dark horse is going to emerge out of a party with little local and state-level representation, and literally no national representation, isn't just fantastical, it's a fundamentally bankrupt strategy.

If you want to make a difference toward breaking up the two-party system, you'd undeniably effect more worthwhile change by volunteering with the third party of your choice, or hey, even running for office yourself, within your community. That's how a party builds itself into a national force.

Think about it: Even if Jill Stein somehow became president on Jan. 20, she'd be largely helpless to accomplish anything outside the boundaries of her executive authority, saddled with a Congress made up of one party that loathes her, and another that really loathes her. It's easy to concoct appealing scenarios of what a third-party presidency would look like in your head, sure. But it's tough to come up with realistic ones that wouldn't grind the machinery of government to an even harder halt than the last eight years of President Obama versus the congressional Republicans.

The far more effective approach, though a harder, slower, and less immediately satisfying one, would be for third parties to focus all their efforts exclusively toward getting elected at the local, county, and ultimately state levels, to gradually build a familiarity with voters that could help them move up the chain. Supporting a third-party candidate for president right now, on the other hand, is a little like starting your boxing career against Muhammad Ali in his prime. Sure, you could tell yourself that you might muscle up and land a one-in-a-million haymaker to his jaw. But hopefully, reality would dawn on you before your head landed in the fifth row.

Basically, if you want to vote third party, you can. If anything should clearly be sacrosanct in American democracy, it's your right to cast your vote as you see fit, and to be able to do it in secret, without fear of public exposure. Still, it's important not to kid yourself about what such a vote would mean ― and if you're a Clinton-wary progressive, it means indulging Stein or Johnson's love of presidential fan fiction while passing up on the chance to cast a hard vote against neo-fascism. And at this moment in history, with these two major-party candidates, I just can't help saying: Please, please don't.

More like this
We’ve All Had Bad Sex. Nona Willis Aronowitz Is Talking About It.
By Sophia Benoit
It’s Official: 'The Bachelorette' Is No Longer A Fairy Tale
By Samantha Allen
The 5 Best Underwear For Preventing Wedgies
By Lisa Fogarty
Are John Legend & Kanye West Still Friends? The Singer’s Latest Update Is Candid
By Brad Witter
Get Even More From Bustle — Sign Up For The Newsletter