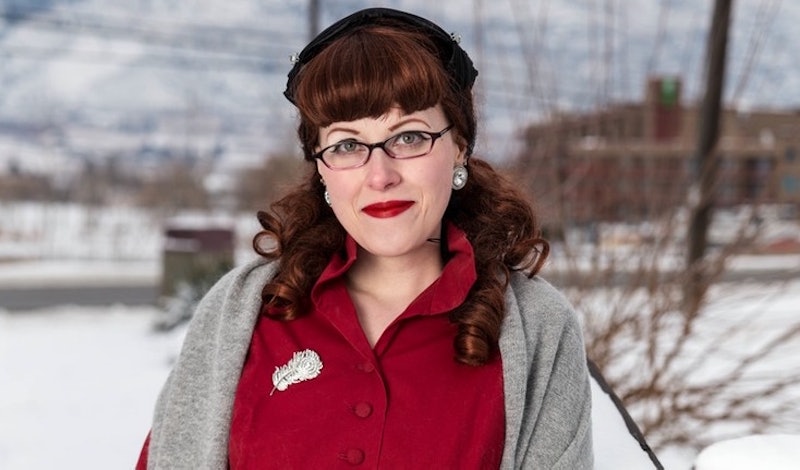 As your average fashion plate can probably attest, vintage influence is everywhere. From Gatsby parties to Bettie Page bumper bangs, anachronism is having one heck of a moment. Most enthusiasts update the look with modern panache — who wants to look like Grandma's twin?

As it turns out, plenty of us. In a sea of admonishments to avoid looking costumey, vintage bloggers go all out, donning head-to-toe historical dress as often as we can. Going on five years in the vintage blogosphere, I wear vintage for work and play alike. I wouldn't dream of stepping out minus hat and gloves. It's my normal, but I admit it: Our community looks pretty strange from the outside in. In these clothes, I've rarely gone a day without being asked if I'm in play or where I parked my time machine. There's stigma, too, behind the stares: Our feminist foremothers fought long and hard to liberate us from corsets, and here we are buckling back in?

Popular imagination often equates “vintage” and “midcentury”, but vintage bloggers’ favorite decades run an impressive gamut. Many respondents indeed favored pinup girls and postwar grace, but lesser-known times didn’t want for fans. From the 1780s (yes, 1780s!) to the 1980s, almost every era got some love.

“I'm happy we have movies set in the 18th century,” says Lauren of American Duchess, “but sometimes it's hard to watch them when the costuming is quite off.” Our resident 1780s gal would certainly know something about that. She’s been sewing historical garb since 2003 and detailing the process on her blog since 2009. When she found herself frustrated by the dearth of period-accurate footwear, Lauren took a cue from history’s housewives and made her own. Five years on, American Duchess Historical Footwear has 32,000 Facebook likes and a sister stockist, Royal Vintage Shoes.

Evil Dressmaker's Rhia is a triple threat. A longtime fan of the Roaring ‘20s' “fancy fabrics and sleek silhouettes," she’s recently broadened her ken to the 1910s and 1930s. “Both appeal to me because of the feminine, although very different, style,” she explains. “In the 1910s the flamboyant hats and hairdos and in the 30s the delicate cuts and details.”

True to her blog’s title, Rhia sews most of her own clothes from vintage patterns and fabrics. Her favorite decades “influence…[her] respect of quality.” She pulls no punches: “I absolutely loathe the modern disposable culture.” Her comment makes sense, as the clothes from her preferred era were normally custom made, and women had far fewer garments in their closets. In the age of planned obsolescence, it’s the rare blogger who opts out of the perpetual purchase machine.

The eponymous Dolly of Dolly Creates makes no bones about it: “I was definitely born in the wrong era,” she says. Christian modesty dictums inform Dolly’s embrace of 1940s styles. "Garments were made to be very modest, with the exception of a few evening gowns, which still were more modest than the scandalous fashions of today.”

Ever effusive, Jessica of Chronically Vintage dotes on her favorite accoutrements like long-lost loves. “Nothing on the fashion front,” she says, “speaks to my soul like the silhouettes of Dior's iconic New Look.” She’s referring to the 1947 New Look collection, whose nipped waists and generous skirts quickly became feminine standard. As America’s postwar economy grew, fashion responded in delightfully outsize kind. Novelty prints and eccentric accessories trickled down from atelier to everywoman.

Forget the Jackie O pillboxes: Nicole of Manic Pop digs the “completely weird and experimental” vibe of the decade’s latter half. She’s mad for all things mod. “I always think fashion should be fun to wear,” she says. For Nicole, “fun” means an assault on the eyeballs. Psychedelia tinges her sartorial sweet spot; she’s fond of the bold prints and strange geometry pioneered by Mary Quant and co.

Blogger Hannah of The Outfit Repeater loves that in the '80s, people were “finally starting their own trends and wearing unexpected combinations!” It says a lot, she muses, that “[i]t's hard to describe one specific style that from that decade. … I feel like it was the first era to really break all the rules.”

“Considering it's a time that existed just less than 30 years ago, you would think people would be able to recall it better!” ‘80s fashion was far more than “neon and mesh”. Some of Hannah’s favorites: “black felt hats, all the fabulous lace and floral, and … those poofy prom dresses!"

Whether it's corsets and petticoats or groovy psychedelia, there were plenty of incredible times for fashion over the years. These bloggers prove that sometimes (especially when it comes to fashion) history is worth repeating.