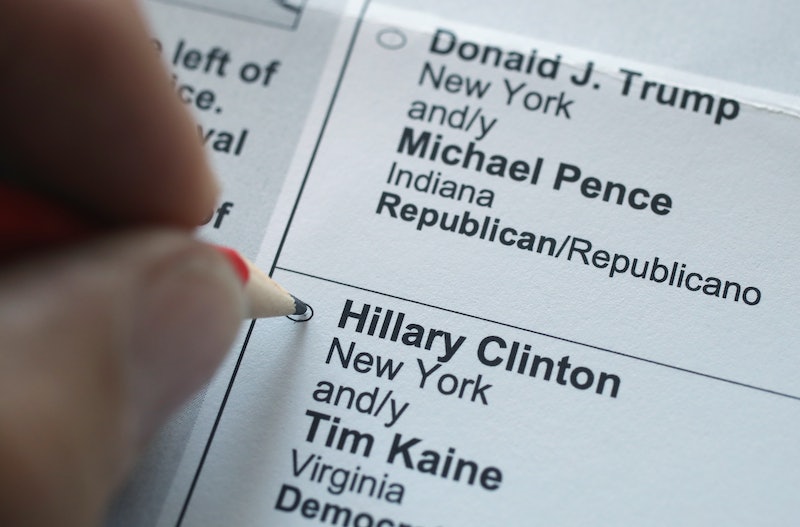 While American politics during the past year and half have mainly focused on electing the next president, voters will be faced with ballots on Election Day asking them to vote for candidates seeking seats in their local communities and in Congress. Different initiatives being proposed in each state will also be found on the ballots, which voters can vote to approve or reject. If you're wondering whether leaving any of these other sections blank will null your vote for president, the answer is no.

If you are only concerned with the contest between Hillary Clinton and Donald Trump, you have the option of voting for that one category and ignoring the rest. On the flip side, if you don't want to vote for either Clinton or Trump, you can leave that part blank and focus on the Congress races. But that wouldn't be a good idea.

Whether you're a Democrat or a Republican, neither candidate will be able to have a truly successful presidency without having at least one of Congress' two chambers on his or her side. The Senate is currently controlled by a Republican majority.

If you support Clinton and happen to live in one of the states holding a senatorial race, you should be very invested in electing your party's Senate nominee. Not only would a completely Republican Congress make it extremely difficult for Clinton to turn any of her plans into laws, it would also continue the current gridlock we have surrounding the Supreme Court.

Despite President Obama having nominated his pick, Judge Merrick Garland, 226 days ago, the Republican-controlled Senate has not even given Garland a hearing, much less confirmed him. The SCOTUS is currently made up of four left-leaning and four right-leaning justices, which has resulted in tied votes for several critically important cases in the United States during the past few months.

If you're a Republican, on the other hand, you should be interested in preserving a GOP majority in Congress, as Donald Trump's chances to win on Election Day are slim at this point.

As for those who don't plan on voting for either of the top two presidential candidates, the importance of those lower down on the ballot is still worth getting out and casting a vote on Election Day. The fact is, politicians in your local community or state, such as mayors and governors, have a more direct effect on decisions that impact your life than those in the White House.