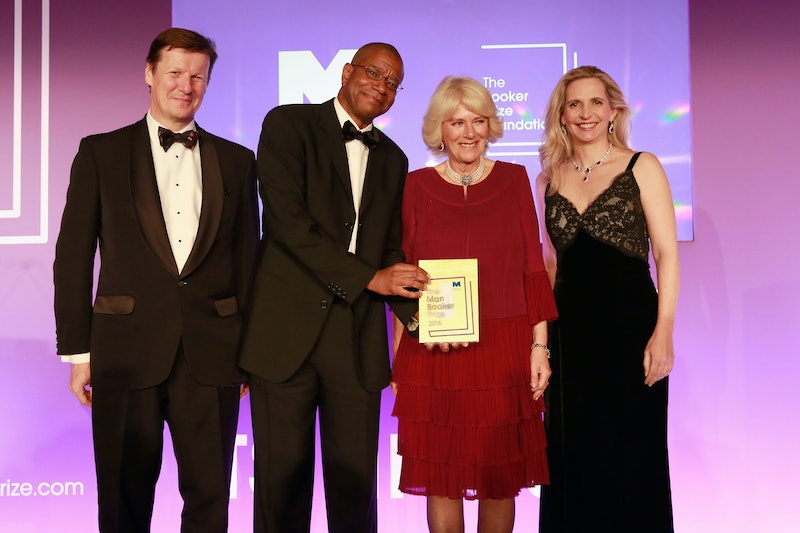 Novelist and writer Paul Beatty became the first American author to win the Man Booker Prize on Tuesday. If you haven't had a chance to read his prize-winning novel yet, these The Sellout quotes will convince you the novel deserved the prize.

A satirical novel about American race relations and politics, The Sellout is the story of one man's desperate attempt to save his town by doing the unthinkable: reinstating slavery and segregation. The story's narrator, Me, is a black man living in Dickens, a small town on the outskirts of Los Angeles that has literally been taken off the map. After his father is fatally wounded in a police shooting, Me throws all of his energy into fixing the things he can, namely stop his town from being wiped from existence. After segregating the local high school with the help of friend and town celebrity Hominy Jenkins, Me gets a slave, a crime that gets the attention of the Supreme Court.

A hilarious and heartbreaking novel that stares deep into the heart of America's darkest race issues, Paul Beatty's novel is a must-read. Don't believe me or the judges who chose the it out of 155 books? Maybe these 7 The Sellout quotes will convince you to add this Booker winner to your TBR list.

The Sellout by Paul Beatty, $12, Amazon

1. "That’s the problem with history, we like to think it’s a book—that we can turn the page and move the fuck on. But history isn’t the paper it’s printed on. It’s memory, and memory is time, emotions, and song. History is the things that stay with you.”

2. “Silence can be either protest or consent, but most times it’s fear.”

3. “Dumbfounded, I stood before the court, trying to figure out if there was a state of being between 'guilty' and 'innocent.' Why were those my only alternatives? I thought. Why couldn’t I be 'neither' or 'both'? After a long pause, I finally faced the bench and said, 'Your Honor, I plead human.'”

4. “My father had a theory that poor people are the best drivers because they can’t afford to carry car insurance and have to drive like they live, defensively.”

5. “This may be hard to believe, coming from a black man, but I’ve never stolen anything. Never cheated on my taxes or at cards. Never snuck into the movies or failed to give back the extra change to a drugstore cashier indifferent to the ways of mercantilism and minimum-wage expectations. I’ve never burgled a house. Held up a liquor store. Never boarded a crowded bus or subway car, sat in a seat reserved for the elderly, pulled out my gigantic penis and masturbated to satisfaction with a perverted, yet somehow crestfallen, look on my face. But here I am, in the cavernous chambers of the Supreme Court of the United States of America, my car illegally and somewhat ironically parked on Constitution Avenue, my hands cuffed and crossed behind my back, my right to remain silent long since waived and said goodbye to as I sit in a thickly padded chair that, much like this country, isn’t quite as comfortable as it looks.”

6. “Sitting here on the steps of the Supreme Court smoking weed, under the 'Equal Justice Under Law' motto, staring into the stars, I’ve finally figured out what’s wrong with Washington, D.C. It’s that all the buildings are more or less the same height and there’s absolutely no skyline, save for the Washington Monument touching the night sky like a giant middle finger to the world.”

7. “'I don’t care if you’re black, white, brown, yellow, red, green, or purple.’ We’ve all said it. Posited as proof of our nonprejudicial ways, but if you painted any one of us purple or green, we’d be mad as hell.”

The Sellout by Paul Beatty, $12, Amazon