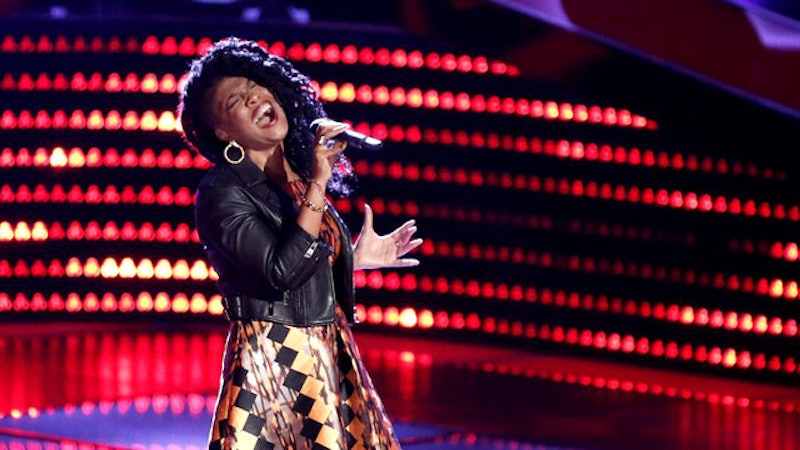 Tuesday's episode started out with The Voice artists Bindi Liebowitz and Courtney Harrell going head to head in the knockout round. Both artists seemed a little out of Blake's typical country music wheelhouse, but they both were ready to bring it. Courtney has a history of being a background singer and writer for artists like Mary J. Blige, Jennifer Hudson, and Beyoncé. She is finally stepping into the spotlight. During the rehearsal footage, Courtney revealed, "I hadn't sang publicly in 15 years, so being on The Voice was a dream come true." Bindi, a salon receptionist, also explained why she came on the show. She said, "Music was kind of on hold because my mom got diagnosed for the second time with breast cancer."

Before the ladies hit the stage, Blake explained the pairing, "I stole Bindi because she's a great artist, a great singer, but she really needs to make it undeniable because Courtney's hitting notes that's blowing my mind. I think this is gonna be a great knockout." Courtney belted out "River Deep Mountain High" by Tina Turner and Bindi decided to sing "Son of A Preacher Man" by Dusty Springfield. While both women were great, it really seemed like Courtney stole the spotlight with this one and the judges seemed to agree.

After sharing her thoughts on each artist, Alicia Keys declared, "Blake, I think Courtney grabbed this one." Miley Cyrus said, "Bindi we got to hear all those beautiful textures that you have that reflect so much of you as a person, but I would love to hear you just explode one time." Miley got just that from Courtney's performance, saying, "Courtney, that's exactly what you did. I didn't have you as someone I should look out for to beat my team's booty, but you might."

Adam Levine pointed out some flaws in Bindi's performance with his feedback. The Maroon 5 singer said, "Bindi, there were some struggles. There were. I think your talent is directly linked to your confidence. I believe in you. I feel like the more confident you sang, the better you got and I think that's not gonna stop happening." In contrast, Adam could not stop throwing out adjectives to describe Courtney. He told her, "Courtney, you are beautiful, shining, superstar maniac soul queen all of sudden. This girl is one of the best we have and I'm so stupid that I didn't know that."

And, with that said, Miley couldn't help interjecting, "Courtney, you should never be singing behind nobody ever again. You should be on the front stage, but if you do, you're coming with me because I'll steal you and take you on tour any day."

After Blake gave the win to Courtney, he stated the obvious: "As much as I love Bindi, there's no question that Courtney had a moment like we've never seen in a knockout round. She's gonna be a problem for these other teams."

More like this
Kim K Is Putting Kanye’s Memorabilia — Like Grammys & Clothes — In A Vault
By Jake Viswanath
We’ve Got A Text! Another 'Love Island' Series Is On The Way
By Darshita Goyal
Twitter Can’t Get Enough Of The Romance In 'Ekin-Su & Davide: Homecomings'
By Sophie McEvoy
Meghan Markle Just Addressed *Those* Wild 'Real Housewives' Rumours
By Sophie McEvoy
Get Even More From Bustle — Sign Up For The Newsletter