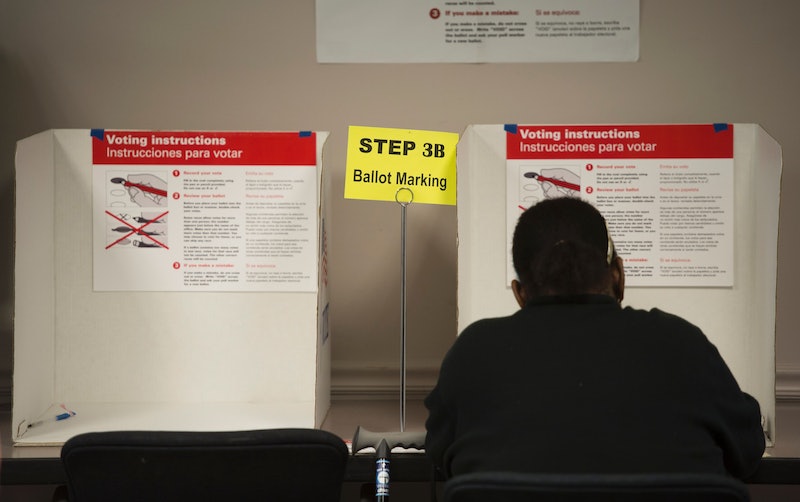 As the election draws ever nearer, some people might be confronted with an unfortunate reality: having to choose between two president candidates who they despise. For many, this election forces them to confront their desire to do their civic duty, while also not wishing to choose between what they perceive to be the lesser of two evils — or, in the opinions of some people, two equal evils. But what happens if you don't select a candidate on your ballot? "Undervoting," or failing to select a candidate for each race on your ballot, should not result in your ballot being thrown out.

Intentional undervoting, or purposefully not filling in or selecting any candidate for president, exists as a middle ground between not voting at all and casting a protest vote for a Third Party candidate like Gary Johnson or Jill Stein. You are still voting for other important races down the ballot, but you are not voting for a presidential candidate. In years past — most famously in 2000 when the notorious "hanging chads" debacle happened in Florida — accidental undervoting was a major issue and did allegedly result in ballots being thrown out. But with the amount of attention and money paid to ensure voter protection during this election, which faces significant risk of voter intimidation, the likelihood of your ballot being counted even if you don't fill in a candidate for the top of the ticket is high.

In an election that features two unprecedentedly unpopular presidential candidates, voting as moral dilemma has never been quite so apparent. While most who feel this strongly about disliking either candidate will likely choose to abstain from voting, leaving the top of the ballot blank is definitely a viable option.

If you do choose to leave the presidential section on your ballot blank and run into any issues at the polls, it's important to know exactly who to turn to to make sure that your ballot is still counted. You can call 866-OUR-VOTE, an excellent non-partisan voter protection group that is there specifically to help make sure voters have their votes counted. In addition, you can always contact your local board of elections with issues — they should have extra staff to handle the high volume of calls related to early voting and Election Day issues (I should know, I used to work for my local BOE).

The most important things to remember when casting your ballot, whether it's at an early voting site or on Nov. 8, is that who you vote for is secret, and that anything that makes you uncomfortable at the polls should be promptly reported. Nobody will shame you for not voting for either candidate, but if someone tries to mess with your ballot, please let an organization like 866OurVote know.