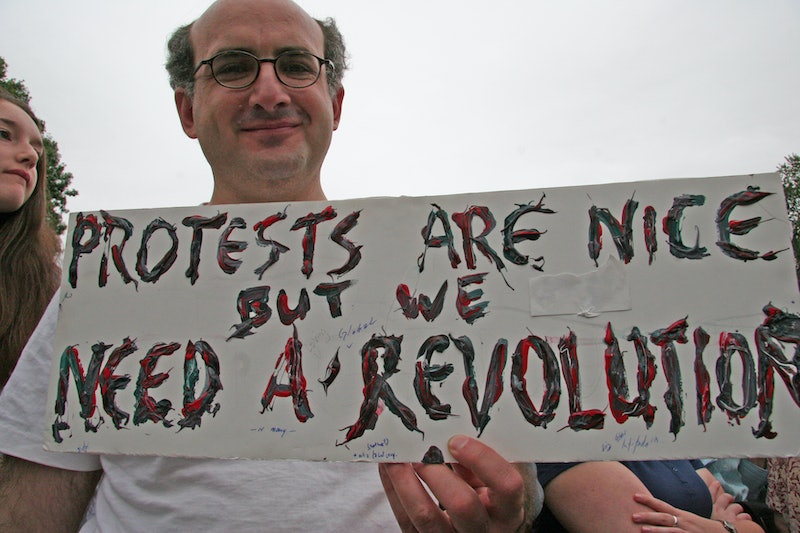 The 2016 election has been a dismal affair for the American electorate. Donald Trump and Hillary Clinton have historic unfavorabiliy ratings, but fear of a Trump presidency on one side and fear of a Clinton presidency on the other is coercing many into voting for a candidate they don't actually support. With the realities of our political system in mind, writer and political activist Sam Husseini developed a meaningful way to vote third party which undercuts both the spoiler argument and the wasted vote argument.

Husseini's strategy, called Vote Pact, brings together voters from the right and left who aren't satisfied with the major-party options. To demonstrate how it works, he gives the example of a person on the political left who is considering voting for Clinton solely because they fear Trump. As a Vote Pact participant, this person instead finds a "vote buddy" who is considering a Trump vote only because he or she fears Clinton, and they both agree to vote third-party instead. "It's a way of overcoming that fear by a somewhat radical solution — reaching out to a would-be Trump voter, freeing them from... voting for Trump, which they don't actually want, and voting your actual preferences," Husseini tells Bustle.

One of the main appeals of Vote Pact is that it allows people to vote for candidates they actually support without begrudgingly helping their least-preferred major-party candidate in doing so, since one vote is denied each candidate. Husseini suggests that part of the reason third parties have remained so unsuccessful is that they haven't effectively acknowledged and responded to the spoiler argument. "[Ralph] Nader, [Jill] Stein, and [Gary] Johnson have all responded defensively to the spoiler allegations," he says. "They have this, in my regard, somewhat empty appeal to principle, and they end up in the low single digits time and time again."

Husseini thinks that these candidates should adopt a more empathetic approach to voters grappling with the threat of the spoiler effect and develop a "meaningful strategy" to make themselves viable candidates. One way to do so, according to Husseini, is to guide voters to participate in the Vote Pact method, telling them, "Here's your solution. Team up with your friend, your neighbor, your brother-in-law, your co-worker, and both vote for me instead of one of you voting for Trump and the other voting for Clinton."

The meaningfulness of the vote is at the heart of Vote Pact. Along with avoiding the spoiler effect, it helps to strengthen third parties, which distinguishes this method from the better-known "safe state strategy," or vote-swapping, which Husseini describes as "very unsatisfying." That method entails finding a voter in a "safe state" — a state in which a certain candidate is almost sure to win — to cast your third-party vote if you're in a swing state — a state that could go either way. The swing-state voter then votes for the major-party candidate he or she least disapproves of.

"Most people who advocate the so-called safe state strategy have an eye for getting a third party to 5 percent to make a more viable party," Husseini says. "But that just kicks the can down the road to the next election, at which point you need to make a break and to have a strategy to actually win, or at least have a theoretical chance of winning." The safe state strategy allows people to vote third-party while avoiding the spoiler effect, but ultimately props up the major parties by helping to solidify their victory, while failing to significantly improve the position of third parties.

Vote Pact departs from the more typical "strategic voting" scheme that doesn't ultimately change anything. And, refreshingly, the type of interpersonal interactions it fosters departs from the heated political polarization that has escalated to fever pitch everywhere from debate stages to Facebook pages. Vote Pact, Husseini says, "is radical because it compels you to cooperate with someone with whom you disagree and with whom you're honest about disagreeing. It compels a mature dialogue."