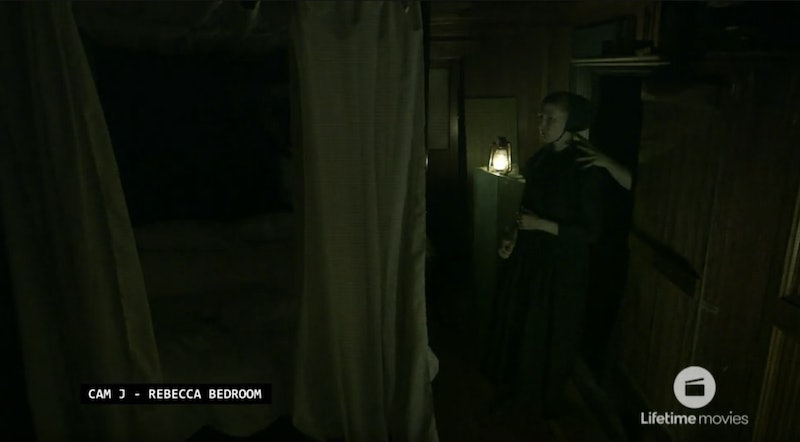 Halloweekend is coming up, and that means you're going to need something seriously spooky to watch for your frightening TV marathon or to get you prepared for whatever other festivities you have planned for the holiday. Well, does Lifetime have the movie for you! The network will be premiering the film Amish Witches: The True Story of Holmes County on Saturday, Oct. 29 at 8 p.m. ET. But is Amish Witches a true story, as its title suggests?

That's actually kind of a tricky question to answer. Yes, the words "true story" are in the title of the movie and a preview clip says it's "based on real events," but there doesn't seem to be any evidence that anything similar to what will happen in the film actually occurred in real life. Here's the synopsis of the movie via Lifetime's website:

When a reality TV crew comes to Holmes County, Ohio to document the lives of an isolated sect of Amish, production is halted by the death of a Brauchau [an Amish witch]. Following her unconsecrated funeral, a small group of young Amish women solicit the TV crew's help in attempting to document the inexplicable events plaguing them. But as everyone soon discovers, the powerful malevolent force haunting them has deadly intentions.

So this description of the movie then made me think, as one blogger on Amish365.com has also pointed out, that Amish Witches: The True Story of Holmes County is actually the title of the fake reality TV show featured in the film, so what happens in the show is the "true story," not what the movie is based upon. It kind of seems like this film could be in the tradition of found footage horror movies, such as The Blair Witch Project or Paranormal Activity , where it's made to look like a documentary but is really just pure fiction.

Reading the synopsis of Amish Witches, of course, made me immediately think of all of those reality shows featuring the Amish that have come out in the past few years, particularly Breaking Amish since it not only documented young men and women in the Amish community but also featured witchcraft as a major topic of conversation among the cast members. In Season 1 in New York, Kate was accused of being a witch, and in Season 2 in Los Angeles, Betsy openly practiced witchcraft and even claimed she put a hex on her castmates.

While all of this was going down during their respective seasons, most of the Breaking Amish cast members stated that witchcraft is not generally accepted by the Amish people, who practice a very strict form of Christianity. However, witchcraft has still been linked to the Amish in a sense in brauche or powwowing, a spiritual healing practice, according to anthropologist David W. Kriebel. It has been practiced by the Amish ever since the first German-speaking Protestant settlers arrived in Pennsylvania in the 18th century.

There has been one popular legend of an Amish witch known as the Chesterville Witch. As the story goes, there's a grave in Chesterville, Illinois said to belong to a young woman who was thought to be a witch and was banished by her Amish community, according to the book Weird Illinois . She disappeared, and her body was later found in a farmer's field. She was buried in Chesterville Cemetery, and a tree was planted on her gravesite in an effort to trap her spirit. Some people believe that if the tree ever dies or is removed, the witch's spirit will escape and wreak havoc on the town. There have also been reported sightings of the Chesterville Witch at the gravesite. It's unclear if there's any truth to this tale, but this story certainly does give you the chills.

So clearly, Amish Witches is rooted in a lot of history and folklore. But even if you didn't know about all of that, you would still probably have a scary good time watching this film.