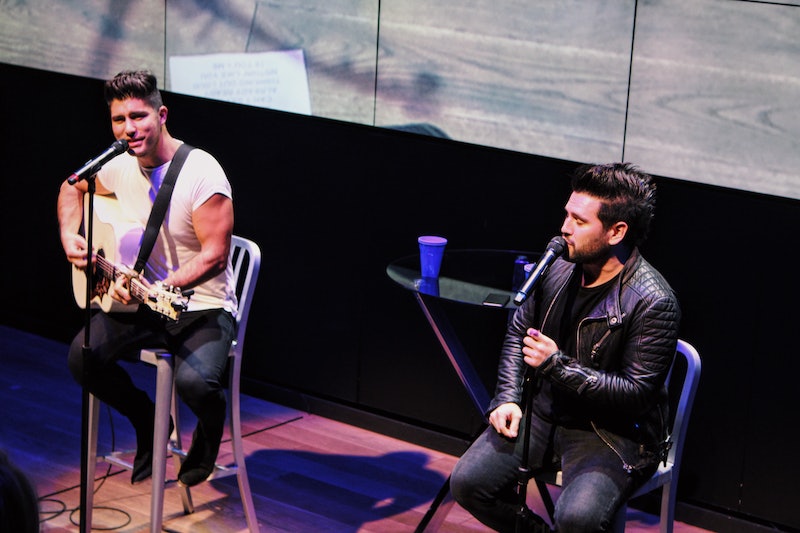 I live in New York City. Clearly, there's rarely a moment I'm not making the most of my days and evenings, gallivanting from happy hours to free shows, museum nights, and open mics. Or so my friends and family with access to my Instagram feed think. Little do they know that those very carefully planned posts have been pulled from a massive file of "latergrams" and "#TBTs" from those few times I went out and did a thing.

Especially after a long day of work, my couch and that beautiful red Netflix screen beckon me to come crawling home and continue marathoning Stranger Things. So, when given the opportunity to attend a free show on a Wednesday evening at Samsung 837, an actual digital funhouse and techie's dream in the coolest part of Manhattan, I figured it was time to live out my sci-fi obsessions... and finally post an Instagram for its intended purpose of instantly 'gramming.

Playing that night were Dan + Shay, the Nashville country music duo that debunked all prior perceptions I had of country music and country musicians as a non-country fan. I'll admit, I walked into the event a bit skeptical but super intrigued. Country music combined with a techie playground? This was bound to be an experience.

I arrived about an hour before doors officially opened to join Dan + Shay on a tour of 837's super-cool space. After some sound checks and goofy banter with the crew, the duo (who did not fit the stereotype I had of country musicians) set down their mics and guitar and grabbed their smartphones, beyond ready for this tour.

Before I knew it, we were all instructed to put on some awkward-looking shoe covers that had us feeling a little silly but also kinda cool. Donning our super trendy slippers, we entered the Social Galaxy, Samsung 837's interactive tunnel comprised of mirrors and flashing screens.

The two were asked to enter their Instagram handle and as they did so, the chamber lit up with their photos, hashtags, and handles, literally immersing us in the pair's social feed from one end of the tunnel to the other. Definitely an upgrade from Instagram scrolling on my couch with my not-nearly-as-cool slippers.

By the time we exited the tunnel, all of us — crew, media, and musicians alike — were giddily geeking out as if we'd just come back from an alternate dimension. We entered The Living Room, a futuristic home setup that lets you play with Samsung's newest gadgets. From the smart fridge that lets you stream music and share grocery lists to the cozy armchairs equipped with VR headsets, I was living my sci-fi dream. With country stars. Talk about surreal.

I think the funniest part of this entire tour was when we had the heart-warming pleasure of watching the country musicians bug out over a spooky Halloween-inspired VR experience in Samsung's VR Tunnel.

"Bro, are you seeing what I'm seeing?"

"This is insane. What is happening?"

"Look out for that demon thing behind you! Behind you, man!"

Yeah, I almost forgot there was an entire show happening after all of this. Maybe they did too. Off with the headsets and back to reality!

The doors opened and the three-story space quickly filled with just about every type of person you can imagine. I bumped elbows with an elderly woman waiting in line to try out one of the headsets and took my seat next to a young couple speaking a language I couldn't quite make out.

Dan + Shay took to the stage as what I already discovered to be their usual playful, charismatic selves. The hour-long show was pared down to a bare-bones acoustic performance, which I found to be a pretty refreshing contrast to the tech-heavy venue.

The space was in constant motion — people floated up and down the levels and into the different rooms, encouraged to try out the newest Samsung tools put on display. Interactive projections played on the walls alongside the soulful chords of Dan's guitar and Shay's powerful, emotion-ridden vocals.

And the weirdest part? I really liked the music. I mean, this was country. Having split my childhood between Eastern Europe and New York (aka, not exactly bluegrass country), I only had preconceived notions of the genre. I wasn't exactly expecting two guys in cowboy attire — you know, boots and hats — but I wasn't expecting to be so moved by their debut single “From the Ground Up,” a song dedicated to the love and life that their grandparents built, the sort of song you come across so rarely on the radio. It was soulful, it was melodic, it was beautifully wise — it gave me chills.

If you told me this is how I'd be spending my Wednesday night a week prior, I would have scoffed at you from the comfort of my couch cushions. But if there's anything I've taken away from this experience, it's the reaffirmation that there is always value in trying something new and pushing boundaries. Bring on the banjos and the VR headsets!

More like this
The 5 Best Laptop Power Banks
By Vanessa Spilios
Looks Like She Made It
By Lindsay Zoladz, Beau Grealy and Tiffany Reid
How Ghosts Inspired Kesha’s New Music
By Jake Viswanath
Stormzy Made A Passionate Speech About The Importance Of Diversity
By El Hunt
Get Even More From Bustle — Sign Up For The Newsletter