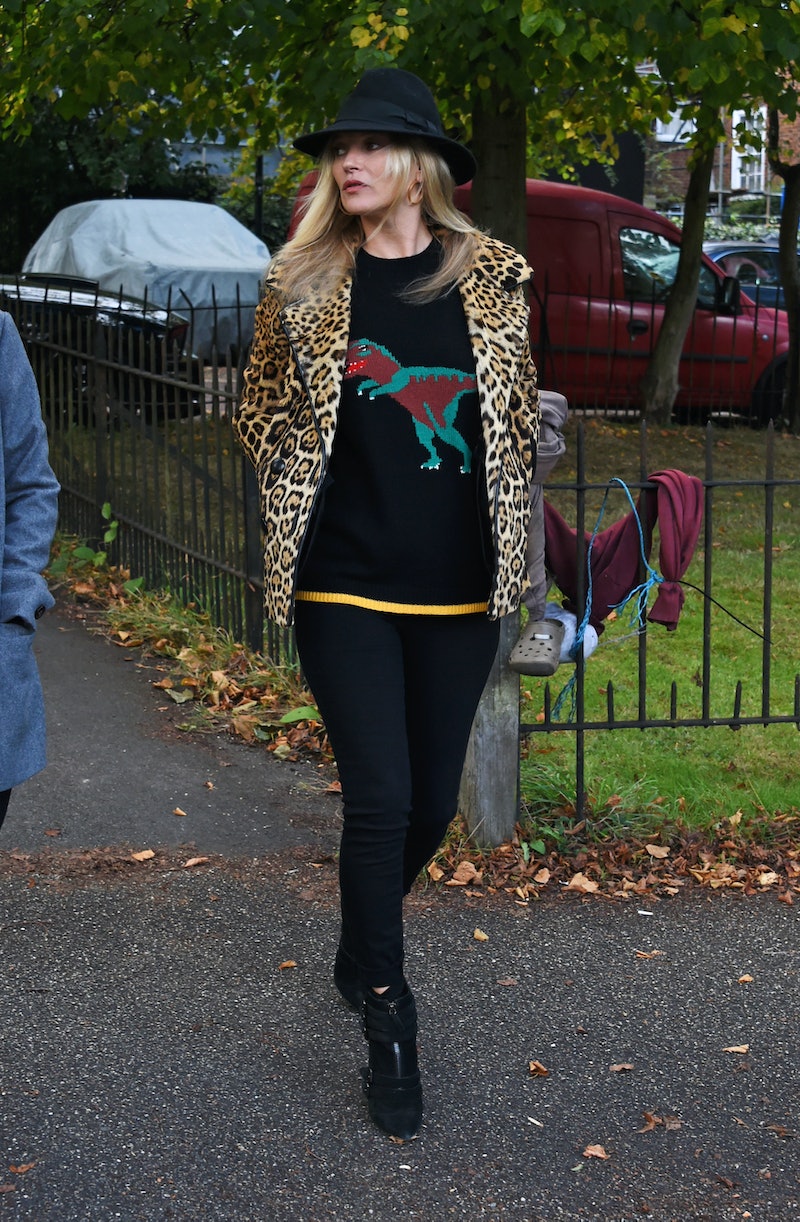 When Coach debuted a dinosaur sweater at their New York Fashion Week show, about a gazillion celebs took notice and then proceeded to rock it. Because there's nothing more adorable than a schoolboy-esque crewneck with a Tyrannosaurus rex knitted on the front, am I right? Raise your hand right now if you probably have something similar in the back of your closet, courtesy of a grandma with a lot of time on her hands and access to a lot of yarn. Us too.

Celebs like Zoe Kravitz, Diane Kruger, Winona Ryder, and Kate Moss have all donned the "Rexy" sweater, so obviously I had to create a dino-themed celeb inspo shopping story so you could too.

Zoe Kravitz styled the crewneck with barely-there short shorts, a Rogue bag, slide sandals, and cool shades, while front row at the show, Winona Ryder paired hers with black pants, loafers, and a black tote. Kate Moss threw a leopard jacket over it and added a chic hat, obviously. #DoAsKateDoesAlways. Julia Roberts was also a fan. But the ladies weren't the only ones lovin' the dino prints, however. Fellas like James Franco and Jared Leto have been spotted in the same pullover.

Let's take a look at some celebs rocking the dino look:

If you want to embrace this Land Before Time trend, but don't want to fork over $700 for the Coach sweater, don't worry. I've rounded up several other dino items that won't make your wallet sad. You're welcome.

This dino PJ set is on an entirely different level of awesome.

Make your Jurassic mark with this Tatty Devine dinosaur necklace. Everyone knows not to mess with T-Rex...

Dinosaurs are badass enough on their own, but then you go and cover them in sequins and they're OOC.

Take a walk on the wild side...all the way to your bed.

5. Glow In The Dark Dinosaur Socks

YOU GUYS — glow in the dark dino socks are a thing and now life is complete.

Backpacks are just better when they're covered with prehistoric creatures, don't cha think?

Rep your Mesozoic Era respect on your sleeve, er, jacket.

Life just does not make sense without glitter dino socks.

We dare you to find a more quirky-cute playsuit than this.

More like this
How To Get Your Hands On The Pat McGrath X Supreme Nail Kit
By Justine Knight
Prefer Alcohol-Free Perfumes? Water-Based Fragrances Are On The Rise
By Audrey Noble
15 Chrome Nail Polish Colors For An Easy, Mirror-Like Manicure
By Audrey Noble
The Beauty Industry Disrupter From Dallas
By Jordi Lippe-McGraw
Get Even More From Bustle — Sign Up For The Newsletter