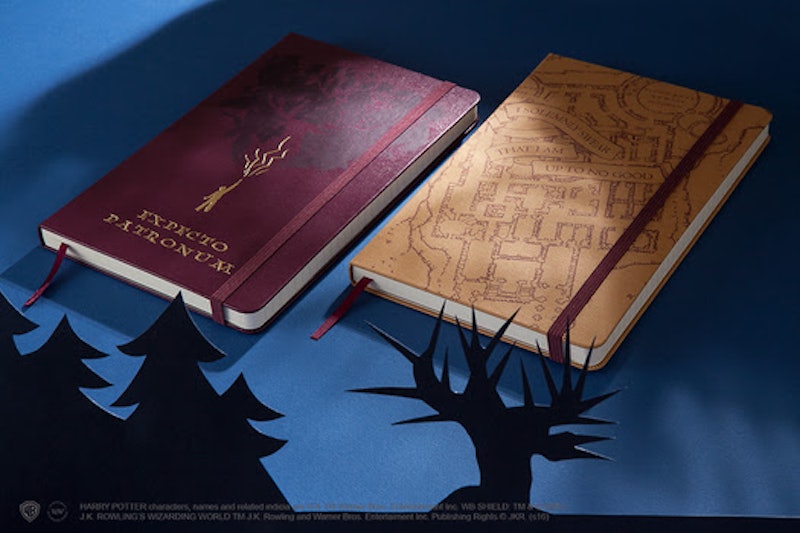 Quietus, Harry Potter fans. I have some news. Some BIG news. Today, on the 27th of October, an announcement rang out that Moleskine is releasing limited edition Harry Potter notebooks, and those notebooks are available beginning right now. Yes, I said "limited edition." Yes, I would suggest running.

In anticipation of both the holiday season and the film adaptation of "Fantastic Beasts and Where to Find Them," which opens November 17, Moleskine has created two beautiful editions that are sure to elevate your journaling to new heights. The Marauder's Map edition is a parchment-colored clothbound book, emblazoned with the iconic words, "I Solemnly Swear I Am Up To No Good." The map is continued throughout the inside cover and features li'l mischievous footprints. The Patronus edition arguably has slightly more gravitas: a gold embossed HP casts the Patronus spell across a maroon leather cover; the story continues to the inside cover, where Harry is surrounded by a dreamy illustration of his stag.

Currently retailing for $24.95 on the Moleskin website, the 240-page notebooks will also feature the initials of James and Lily Potter on the inside cover, surrounding the "If Found" box. I don't know why that makes me weirdly emotional but it does.

And of course, because Harry Potter is consistently extra, you get additional treats with your purchase. Each notebook comes with an exclusive sticker set featuring your favorite spells (I'm only mad there's just one "Expelliarmus!") and key Hogwarts items (the Hogwarts crest, a golden snitch). The paper band that wraps around your notebook is also designed to double as a potions koozie for your water bottle. Frankly, it's almost too much.

Guys. Here's the thing. I feel like, in theory, if I had these notebooks, I would be so much better at a lot of things, but especially journaling. Like I would be emotionally great and writing novels and organizing my life and my cat's life and the world would be better off, but in reality, these are so beautiful that I know I would be unable to write in them, and they would join the rest of my beautiful, unmarred Moleskines, in a pile on my desk.

But also like yeah I'm probably going to get one of each.