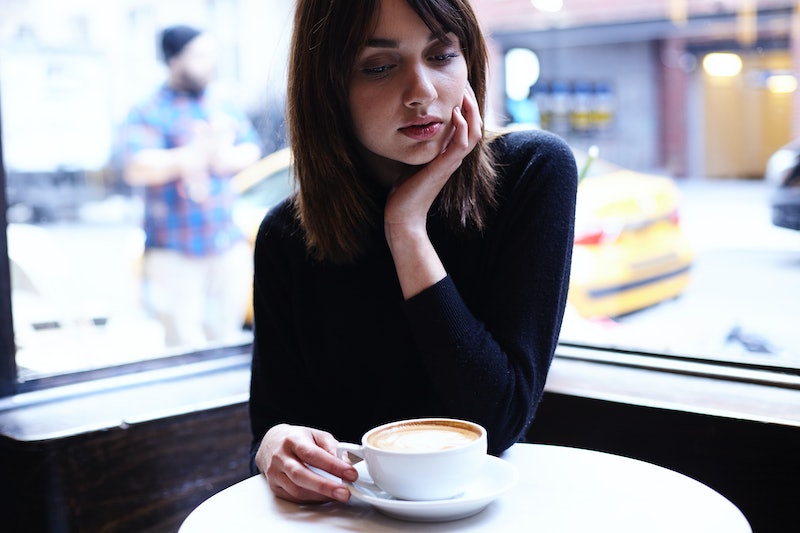 One of the most frustrating things you can experience while having a job is self-doubt. You try to get over it, but sometimes it just doesn't work. For some, this feeling happens every now and then. For others, they could be experiencing impostor syndrome. If you consider yourself to be a perfectionist, you're probably very familiar with this feeling. You may tend to beat yourself up a lot, and you don't consider yourself a great employee. But what exactly does this phenomenon mean?

"The Impostor Syndrome or Phenomenon refers to people who are high-achievers who do not feel successful, believe that their accomplishments are flukes or from luck, and fear that they will eventually found out to be frauds," says psychotherapist and author Karen R. Koenig M.Ed., L.C.S.W., in an interview with Bustle over email.

Having impostor syndrome doesn't just mean that you feel like a fraud, there are other types of signs you need to look out for. "Characteristics include people who are highly insecure and do not feel or see themselves as successful even when they are. They are hyper-critical of themselves and can’t internalize the positive that they do. They may fear being fired because they think they’re doing a poor or inadequate job (in spite of getting stellar reviews) and live in terror that their superiors will gradually or suddenly see that their work is inferior. Sometimes, they’re so uncomfortable with the tension they feel about getting fired, that they sabotage themselves by performing poorly, and do get themselves fired or demoted," continues Koenig.

Not sure if you have imposter syndrome? Here are nine signs that indicate that you may.

1. You're Afraid Of Being Found Out

Even when you receive kick-ass reviews, you believe your boss is going to fire you due to your subpar performance. You don't believe you're the right person for the job and you're only temporarily in this position until your boss finds someone better. "[You're] living in a constant state of 'faking it.' That everyone is going to find out, and that you will never be good enough for a mate, your family, or a job," says psychologist Nicole Martinez Psy.D., LCPC, in an interview with Bustle over email.

2. You Place An Immense Amount Of Pressure On Yourself

Whether you're finalizing a PowerPoint project, or simply reorganizing the photography prop room, you consider every task to be very important. "You put an immense amount of pressure on yourself to perform in all areas of your life, but you will never be able to live up to the standards you set," says Martinez.

The more you obsessively think about how "unfit" you are for a certain role, the more you may believe it. For instance, when you feel like you're living a lie, you might self-sabotage your performance at work so it may fall in line with your perceived world. "This is when you decide [you're] not good enough, so you go ahead and make it so before you can be 'found out,'" says Martinez of people who subconsciously sabotage themselves.

4. You Think You're Not Good Enough

No matter how hard you try, you think you don't fit in with the culture of a company. You don't think you're good enough and believe that everyone thinks the same as you do. You even begin to second-guess everyone's motives and when something goes wrong, you beat yourself up more than you should. "This is your mantra. You think that everything you say, do and produce is not up to standards and that everyone knows it," says Martinez of people who think they're not good enough.

Even when everyone and their mom thinks that you're great at your job, you don't believe it. You may allow your insecurities to shine during meetings or begin to lose faith in your ideas because you don't think they're great anymore. "You lack confidence in what you do, and never believe that what you do can be, or is, good enough," says Martinez.

6. You Think Everyone Could Do Your Job

Let's be real: While a few people could do your job, these people don't have your ideas, your personality, or your skills. "Sometimes when we actually are an expert in something that it comes so naturally to us, we can start to think anyone can do it and ultimately feel like a fraud," says career & business coach Rachel Ritlop in an interview with Bustle over email.

7. You Don't Believe You Deserve Praise

"Whenever someone praises you, you're skeptical or rebut their compliments," says Ritlop of people who believe they don't deserve praise. When you have impostor syndrome, you tend not to believe any type of praise you're given — no matter how many times you hear it. You think you could always do better or that certain people are just being nice to your face.

According to Forbes, people who have impostor syndrome usually become obsessive about their work. They work long hours and triple-check everything they do. They have to be careful because this type of work ethic can burn them out and permit them to engage in negative self-talk. And, frankly, nobody has time for that, amiright?

9. You Engage In Negative Self-Talk

According to Ritlop, "[People with impostor syndrome] might be thinking: I did a terrible job, I didn’t do well enough, I should have put more time/effort into this project, people are going to start seeing through me soon, at some point everyone will know what a fraud I am, I know I won’t be able to keep fooling people for long, I’m really worthless and people just don’t know it yet, I’m really inadequate,"

Most of the time, the root of impostor syndrome begins to thrive because of the negative seed you decide to plant in your thoughts. Knocking your strengths and belittling your weaknesses will only make you feel more like a fraud if you're not careful. The next time you feel yourself engaging in negative self-talk, stop and ask yourself why. Then, think about positive ways you can lift your spirit — like thinking about how awesome you already are or believing that you do deserve this job that you currently have.

While you may not believe you're good at your job or you think your boss is going to figure you out, you need to throw that kind of thinking out the window. Remember: your boss believes in you, and0 they wouldn't have hired you and let you continue to work at your job if they didn't. All you can do is do your best with what you have and not beat yourself up when something goes wrong. You got this.