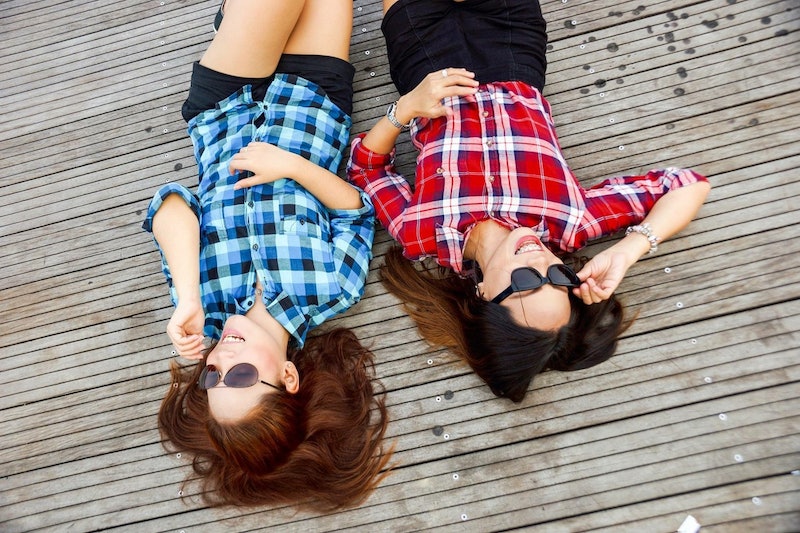 The lines between extrovert and introvert can sometimes get a little blurry, and some of us might think we are one of the two, only to actually be the other. Although it's definitely possible to be a combination of both, some people may exhibit some signs that they are extrovert, even if they think they're more introverted. Some people may be more timid and shy and believe they're an introvert, but they're really energized by people and actually fall more into the extrovert category.

So how do you know if you're just a timid extrovert or if you're actually an outgoing introvert? "How you get your energy is how I describe it," says psychologist Dr. Ganz Ferrance over email. "Introverts charge by being by themselves and in spending time by themselves. Extroverts charge by being in an interaction with other people. If someone is quiet, it does not mean that they are introverted."

Researchers estimate extroverts make up 50 to 74 percent of the population, according to Psychology Today, which would make introverts a little more rare. If you're not sure exactly where you fall on the spectrum, consider these eight signs that you actually may be an extrovert without realizing it.

Socializing doesn't always have to mean painting the town red, and enjoying hosting parties and events could be a sign you're extroverted. "Sure, you haven't left your home, and while that may bring certain comforts, it's still an act of extroversion," says psychologist Antonia Hall, MA over email.

2. You Interact Often On Social Media

Spending time on social media and even texting people all day long is an indicator that you like being involved in social situations, even if you're doing it from your couch. "Being at home behind a computer screen makes it feel safer, but it's the modern day form of interaction," says Hall.

3. You Talk Your Problems Out With Your Friends

Introverts are more likely to solve problems on their own, while extroverts want to discuss the issue. "Extroverts solve problems by talking about their ideas — out loud — to friends and family, for example," says professor of psychology Joanne Bagshaw, PhD over email. "Thinking out loud and verbalizing is how they process their ideas and reflect on their thoughts."

If you often seek out new experiences, this could be a sign you're actually an extrovert. "Extroverts are spontaneous and like to try new things because novelty and variety stimulates their brain," says Bagshaw. Introverts, on the other hand, tend to avoid overstimulating activities.

5. People Describe You As Approachable

"Most of the people that know you would likely describe you as very friendly and approachable," says psychologist Dr. Joseph Cilona over email. "Since extroverts enjoy interactions, often feel energized by them, and tend to be very open and communicative with new people they meet, descriptors like 'friendly' and 'approachable' tend to be the main way they are described by those that know them."

6. You Feel Bored Being Alone

If you easily get bored when you're alone, you're probably not an introvert. "If too much time passes without interacting with or communicating with others, you tend to feel listless, bored, or to lose interest in whatever you’re doing while you’re alone," says Cilona. "In general being alone often bores you or taps your energy."

7. You Get Along With Different Groups Of People

You can take a look at your friend group to get an idea of what category you fall into. "Having many different groups of friends and social circles, as well as a lot of diversity in types of personalities, interests, walks of life, ages, etc. is very common in extroverts and less common in introverts," says Cilona.

In scary or difficult situations, the extrovert will want to be surrounded by friends and family. "The extrovert will need to get good people around him and that are supportive and of the like mind," says Ganz.

It can be hard to tell if you're an introvert or extrovert, and many people fall in the middle of the scale, but becoming aware of how you feel after interacting with others can be an indication of what type of personality you are.