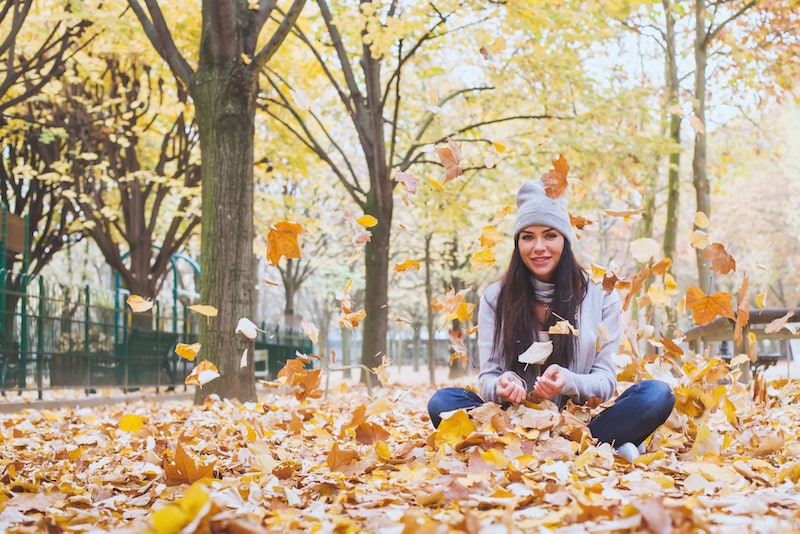 Spring is typically known for being the best time to fall in love. Summer is a great time to be single, free, and date whoever you want. Winter brings us cold nights where we want a cuddle buddy more than ever. Then there’s Fall. In the middle of everyone’s favorite pumpkin spiced-everything season, Autumn brings us the best time to end a relationship. Why?

“Autumn may be a more aligned time to end a relationship because its energies signify the harvest,” spiritual author and guide Heather Kristian Strang tells Bustle. “It's a time to reap what we have sowed. As we ease into Winter, it's a time to turn more introspective to prepare for the coming new year and all of the new that is calling to us.”

During Fall, it may be easier to see things about our partner more clearly — especially before October 31. Yeah, Halloween. Halloween is rooted in a Celtic tradition of honoring the end of the harvest and moving into the introspective retreat time of winter. It honors the ‘dying’ of the vegetation. “The ‘death’ of the relationship opens the space to take time to self-nurture during the cozy and introspective winter months,” Strang says.

Just like the falling leaves, Autumn is all about letting go of a “dying” relationship in order to make room for something new. “Fall is usually a very reflective period after spring and summer,” Norva Semoy Abiona author of Time to Go and Founder of The Wise Wife Community tells Bustle. “It’s a great time to ask, How is this relationship serving me?”

With that said, here are four reasons why it's a good time to end a relationship:

1. Your Chances Of Healing Post-Breakup Are Much Better

“Autumn isn’t as depressing as a cold, dark Winter can be if you need to really hurt and heal following a breakup,” relationship expert and author April Masini tells Bustle. “Autumn still allows for meeting friends and family for cocoa and cocktails to heal and regroup. You can still take walks in the brisk weather and go out to do things. Winter, on the other hand, has a tendency to create shut-ins. Being shut in is a tough way to heal from a breakup.”

2. Life Gets Too Complicated From Thanksgiving On

Are you obligated to invite your partner to a party or event in return? How do you introduce one another? Does family get involved? I mean, that can complicate a relationship if you're not 100 percent all-in. “Unless you're really committed to one another, now's the time to part ways and actually enjoy the upcoming social season as a single,” certified relationship coach Rosalind Sedacca tells Bustle. “It can be lots of fun!”

3. It’s Always A Good Time To End A Relationship That Isn’t Working For You Period

How many times have you stayed at a movie that you've already paid for but aren't enjoying? It's the same thing with relationships. People have a tendency to get stuck in a relationship that they've spent months or even years working at.

“This is a psychological phenomenon called ‘the sunk cost fallacy,’” Life Coach Sara Oliveri tells Bustle. “Basically what it boils down to is that the more we invest in something, the less likely we are to abandon it. We believe we are making a rational decision about the future value of something, but instead we are making an emotional decision based on what we have already invested. However, the problem with this emotional reasoning is that by refusing the experience loss now, we incur even greater loss in the long run.”

Autumn means that the holidays are fast approaching. While it seems nice to have a partner around to celebrate, do you really want to have someone you aren’t so sure about becoming close to the people you know will always be around? “I find it helpful to minimize the exposure of people I'm on the fence about to my family, because introducing someone to the family seems like a vote in favor of the relationship both to your family and your partner, whether you like it or not,” Oliveri says. “So, if you make that vote, it's important to do so consciously.”

4. Fall Is Just The Best Transition Time For Anything In Life

“[Fall] tends to be a time when people really want to get serious about their lives and evaluate where they are in a more global way,” marriage and family therapist Allen Wagner tells Bustle.

Professionally, the second half of the year is when people think about bonuses and how they’re evaluated at work. People also seriously consider looking for new jobs after the holidays. “There is an unconscious understanding that the passivity of Summer is over, and that they need to be assertive in the Fall if they want to control their own destiny,” Wagner says.

When it comes to relationships, incompatibility tends to be overlooked when we’re just having fun. But the holidays can bring a sense of familial pressure or seriousness. People also tend to reflect on the New Year and see it as another year of their life that's come and gone. “I think the whole year is full of transitions that unconsciously but predictably change our behaviors and attitudes,” Wagner says. “Spring tends to be a time people are positive, motivated, and optimistic. Summer is a time of reward, and Winter is often reflection and regret (New Year’s resolutions, often lead to attempts at extreme change, redemption). But Fall is a push for positive change.”

And if you're not in a relationship but want to be in one? There's good news. “I think this time of year is much better for finding love than ending a relationship,” Jennifer B. Rhodes, dating expert and founder of the bi-costal relationship consultancy, Rapport Relationships tells Bustle. “The holidays cause people to be more social, open, and warm. Connections are more easily made at holiday parties and networking events.”

So if you’re with someone right now who you’re not too sure about, now is a great time step back and evaluate where you’re at. After all, the holidays are quickly approaching and it's a good time to make some positive change.