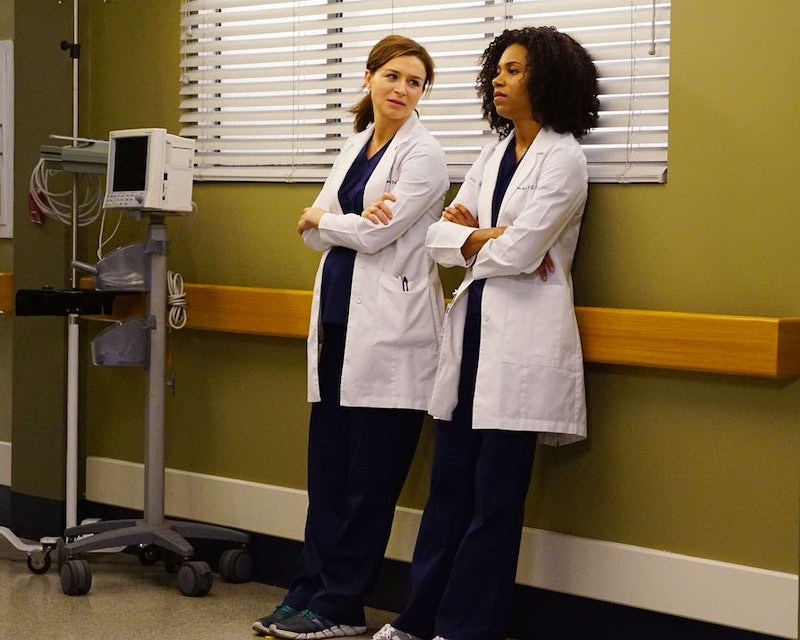 I knew that Amelia Shepherd was unstable on Grey’s Anatomy, but she goes up and down more times than a yo-yo. She and Hunt got married (which was lovely by the way, even though it ended in April having a no-epidural caesarean section on Meredith’s kitchen table) and quickly decided that they were ready to start having kids. Well, that may not be the case. Amelia thought she was pregnant, then wasn’t, and then the bomb came out — Amelia isn’t sure she wants more kids on Grey’s Anatomy , and Hunt doesn’t know it yet. Yeeps.

I say "more kids" for a reason. Private Practice fans know all this, but when Amelia was living in Los Angeles and was an addict, she and her fiancé (who passed away) had a baby boy with anencephaly of the brain – meaning that the baby had no brain — and he died about 45 minutes after birth. After losing a patient, Amelia tearfully recounted this story to Karev, who offered a shoulder to cry on, and she told Karev that when she found out that she wasn’t pregnant with Hunt’s baby, Hunt was sad and she was relieved. Amelia isn’t even sure she wants to try and have more kids, and I think a lot of it stems from her first very traumatic birth experience. She had a son, and then she didn’t. I mean, that’s a kind of difficult I hope that I never, ever have to understand in real life.

Amelia is well within her emotional rights to feel as she does, but the only problem is that she doesn’t tell Hunt everything. Hunt really wants a family — he tried to have a baby with Cristina when they were married and she was like “Nah, no thanks!” — and the fact that Amelia may be backtracking on her initial decision to have kids is problematic. It could be the undoing of their relationship. Hopefully, Amelia will tell Hunt her feelings, and they can work through it together. As always, silence does no one any favors on Grey’s Anatomy.