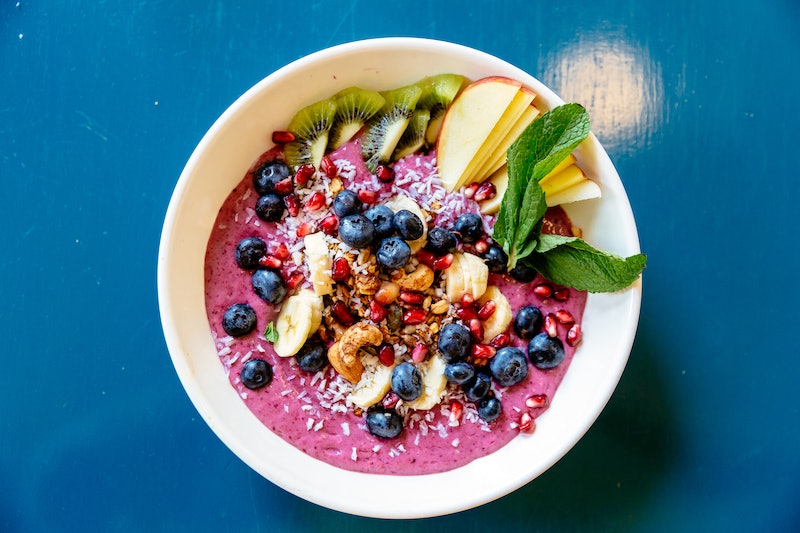 Get excited, vegans, because Nov. 1 marks World Vegan Day. So, as you gear up for a day of celebrating plant-based diets, get in the spirit by checking out these quotes about veganism for World Vegan Day that are totally thought-provoking. No matter what your diet is — vegan, vegetarian, gluten-free, exclusively meat —, these quotes are worth taking a look at.

Obviously, everybody has to make their own decisions in regards to their diet, but that doesn't mean that they can't be influenced by others' authentic feelings. Everyone has to do what they feel is best for themselves, and it's fine whether or not being vegan is a result. These quotes aren't meant to sway anyone in a particular direction — instead, they're just meant to help everyone who isn't vegan understand a different perspective, and everyone who is vegan celebrate their lifestyle on a day entirely dedicated to it.

So, whether or not you're vegan, take a look at these quotes and really consider them. Share a quote with a friend, post a quote on your Facebook, or even send one out in a tweet if you're feeling like being celebratory of the lifestyle today. Veganism isn't just a diet, it's a life choice. Share the love.

1. "The human body has no more need for cows' milk than it does for dogs' milk, horses' milk, or giraffes' milk." — Michael Klaper

2. "I decided to pick the diet that I thought would maximize my chances of long-term survival." — Al Gore

3. "It is more important to prevent animal suffering, rather than sit to contemplate the evils of the universe praying in the company of priests." — Buddha

4. "If you don’t like seeing pictures of violence towards animals being posted, you need to help stop the violence, not the pictures" — Johnny Depp

5. "I just could not stand the idea of eating meat — I really do think that it has made me calmer.... People's general awareness is getting much better, even down to buying a pint of milk: the fact that the calves are actually killed so that the milk doesn't go to them but to us cannot really be right, and if you have seen a cow in a state of extreme distress because it cannot understand why its calf isn't by, it can make you think a lot."— Kate Bush

6. "You put a baby in a crib with an apple and a rabbit. If it eats the rabbit and plays with the apple, I'll buy you a new car." — Harvey Diamond

7. "We do not need to eat animals, wear animals, or use animals for entertainment purposes, and our only defense of these uses is our pleasure, amusement, and convenience." — Gary L. Francione

8. "Some people think the plant-based, whole-foods diet is extreme. Half a million people a year will have their chests opened up and a vein taken from their leg and sewn onto their coronary artery. Some people would call that extreme." — Dr. Caldwell Esselstyn

9. "An animal's eyes have the power to speak a great language." — Martin Buber

10. "My perspective of veganism was most affected by learning that the veal calf is a by-product of dairying, and that in essence there is a slice of veal in every glass of what I had thought was an innocuous white liquid — milk." — Rynn Berry

11. "Until one has loved an animal, a part of one's soul remains unawakened." — Anatole France

12. "After all the information I gathered about the mistreatment of animals, I couldn't continue to eat meat. The more I was aware of, the harder and harder it was to do." — Liam Hemsworth