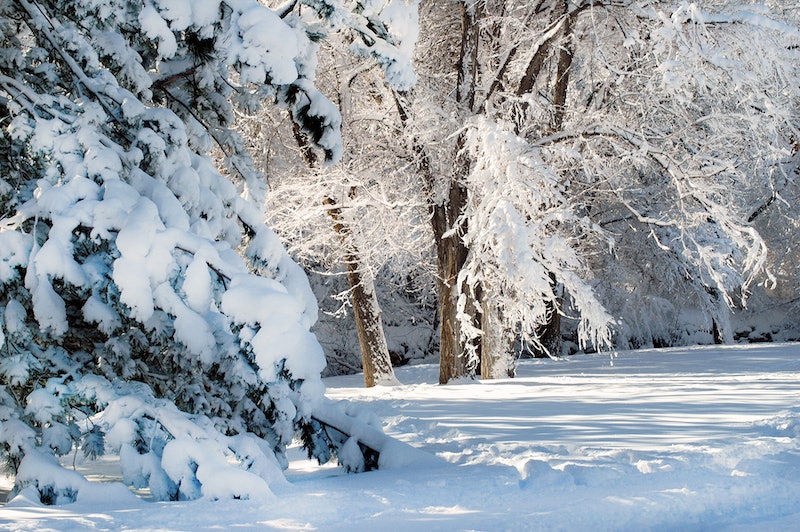 We've all heard of it by now, but is seasonal affective disorder (SAD) actually real — or is it just a catchy acronym? For the moment, the medical establishment is saying that it is, but there are increasing worries that perhaps our understanding of it needs to be based on more effective science. The Diagnostic Statistical Manual V, the gold standard of diagnostic categories for psychological disorders, defines SAD as occurring when "a regular temporal relationship exists between the onset of mood symptoms and a particular time of year," and a "full remission of mood symptoms" occurs at another time of year. It's important to note something specific, too: the DSM-V doesn't qualify SAD as something on its own. It's supposed to be a variant on bipolar or depressed patients whose symptoms turn out to be seasonally affected.

Theories about seasonal affective disorder's physical manifestations are widespread. Scientists have argued for the role of hormones, the body's natural circadian rhythm, and how it responds to light and serotonin. Unfortunately, there's no scientific consensus on these hypotheses, and nobody's traced a physical "route" for SAD; a lot of our science about it is based on studies of peoples' moods, and that, as we'll discover, can lead us into some peculiar places.

If you've been diagnosed with SAD, or know somebody who has and are feeling a bit puzzled about the realities of it, here's a primer on the latest lowdown on its existence.

Why SAD Is Currently Facing Doubters

The major reason that SAD is currently facing questions is an extremely widespread study released in January, which focused on the moods of 34,000 participants over a year in 2006, plus associated details about their location, latitude, and accompanying weather conditions. They were using data from the Center for Disease Control, which does annual surveys around the U.S. on topics including mood, and were initially looking out for the specifics of SAD, like where it might start occurring first. Much to their surprise, they found no indication that seasonal patterns of any kind across the seasons had an impact on depressive feelings.

Scientific American explained, when the survey results went live and created a stir, that part of the reason this particular analysis may have discovered no real causal link between season and depression was that the questions weren't designed to attempt to find a SAD diagnosis. The CDC's study asked people to talk about how they'd been feeling over the past two weeks. SAD questionnaires, Scientific American pointed out, ask people to think back for much longer, and are also explicitly about mood and the seasons.

Those questions typically used to screen for SAD, while very specific, are also incredibly leading. Imagine you are answering a battery of questions about how your mood, weight, appetite vary over the year, then filling out charts to compare your habits over the the seasons. You are asked to consider at which time of the year you gain or lose weight, sleep or eat less. Using this standard assessment for SAD, you might reconsider whether you have a yearly mood cycle after all.

The SAD diagnostic questions might encourage people to look for SAD patterns, and may reach back too far in the past to be reliable. (Part of this is likely because of the DMS-V, which requires a pattern over two years to get a diagnosis.)

This is one of the key problems with SAD, in the light of this study: does our current method of diagnosing it create far more "cases" than there actually are? It casts a bit of doubt on the Seasonal Pattern Assessment Questionnaire (SPAQ), which is the basis of many studies on SAD and how widespread it is: a 1990 study, for example, mailed the SPAQ to people across America and found that people in northern latitudes were more likely to report SAD in winter.

If SAD is removed as a legitimate category, seasons effectively go out of the equation as a large-scale influence on people with mood disorders. But there are a lot of issues with throwing a diagnostic category out of the window entirely based on one study. For one thing, further studies are needed to confirm the 2016 findings. For another, there are considerable, if erratic, studies to prove that there does seem to be a relationship between poor mood and seasons: Norwegian professor Andres Magnusson declared in 1990, after an overview of the available science, that "the actuality of seasonal variation in mood has been documented thoroughly by both retrospective and prospective studies."

And finally, as the National Institute of Health pointed out, using the CDC's phone survey model for evidence isn't actually unproblematic either: "Depression was not a clinical diagnosis — it was based on the participant's response to a questionnaire over the phone. This presents problems, as some people may not have answered questions truthfully, and those with depression or SAD may not have answered the phone." The SPAQ might be worrying, but relying on the CDC's surveying has issues too.

Why Mood And Seasons Are Probably Still Linked

For the moment, SAD remains firmly on the diagnostic books, but it seems clear that the nuances of relationships between mood, particularly in those people with clinical depression, and seasons still remains to be further explored. Unsurprisingly, many of the scientists interested in SAD's existence and what low light and/or cold weather do to mood are from Nordic countries, where extensive winters are part of the climate. A new study from Aarhus University in Denmark released this week, for instance, found that there was a distinct link between the shift from daylight savings time to standard time in the country (which occurs at the start of the winter months) and a spike in depression diagnoses and hospitalizations.

The study, which focused on 185,419 depression diagnoses between 1995 and 2012 in the country, was limited by the fact that it was only really focused on "serious" depression, but the scientists said in a statement that they "expect that the entire spectrum of severity is affected." The spike in question? A whopping eight percent.

What's actually happening remains unclear. Whether the shift from daylight savings time to standard represents a symbolic, depressing point for Danes of a long, difficult winter, or if it's related to lower exposure to daylight as the day's activities shift, isn't known. The scientists themselves think it may be both, with particular emphasis on the "negative psychological effect" of "the coming of a period of long, dark and cold days." Nobody in the study mentioned SAD as a potential variant in the types of depression being mentioned; but expectations about misery in winter may play a pretty powerful role. (It's not just Nordic countries, either. A study of women diagnosed with SAD in 2003 found that, during winter, they were more likely to ruminate and have depressed thoughts, but that didn't look at potential causes.)

There are also unanswered questions in the role of light in apparently lifting the moods of people with seasonally affected depression: a study in 2006, for instance, found that exposure to 30 minutes of 10,000-lux light in the morning had the equivalent mood-boosting effect to a 20mg daily dose of Prozac. SAD lamps continue to be widely prescribed for people with seasonally-affected mood; light and mood are clearly linked, though we aren't entirely sure why. Sunshine as a mood-lifter: still not under threat, even if SAD itself is facing some doubts. Grab that glorious golden autumn light while you can.

Science both for and against the existence of SAD appears to have flaws; but there definitely seems to be a link between the long, cold days of winter and the experience of some people with mood disorders, and that's something to keep in mind while preparing for December.

More like this
How Ovulation Affects Your Sense Of Smell, Libido, & More
By JR Thorpe and Lexi Inks
The Case For Following A Menstrual Cycle Workout Plan
By Emma McGowan and Carolyn Steber
The Beauty Device Kristen Bell Uses Every Single Morning
By Carolyn Steber
An Expert Weighs In On The Viral Raw Carrot Salad Trend
By Alexis Morillo
Get Even More From Bustle — Sign Up For The Newsletter
From hair trends to relationship advice, our daily newsletter has everything you need to sound like a person who’s on TikTok, even if you aren’t.