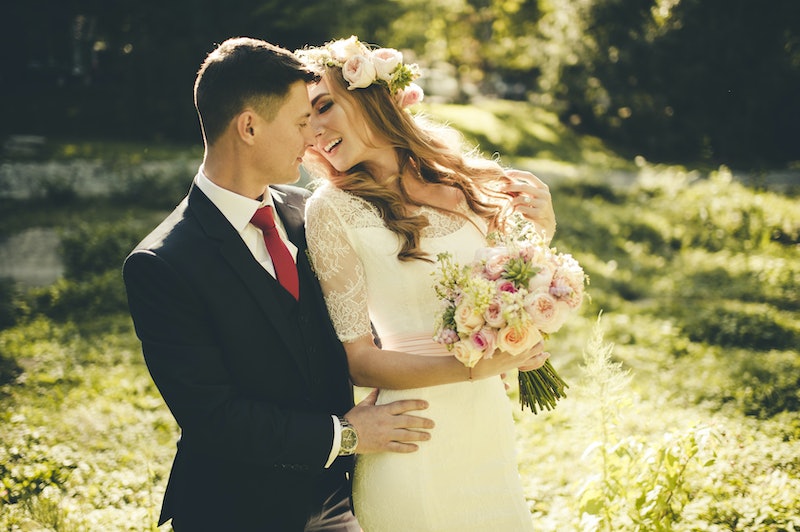 Having the prenup talk in the middle of deciding what song you’re going to dance to at your wedding is probably no one’s idea of a fun time. Who really wants to think about the end when you’ve barely even gotten to the beginning? But believe it or not, a new national survey from the American Academy of Matrimonial Lawyers (AAML) found that more Millennials are seeking prenups.

"Millennials probably need prenuptial agreements more than any other generation as they are dealing with both family money as well as new business ventures," Jacqueline Newman, NYC Divorce Lawyer and Author of Soon-To-Be-Ex, Your Guide to a Perfect Divorce and Relaunch, tells Bustle. Prenuptial agreements are best suited for people entering marriages with premarital funds they want to ensure will maintain their separate property character if blended with marital assets. They can also make sure money stays in the family in the event that the new spouse-to-be passes during marriage.

Additionally, prenups are also important for anyone who owns their own business. Start-ups are even more important to protect because the seed was most likely planted prior to the marriage but the significant growth will take place during the marriage. "Without an agreement dictating otherwise, the separate property nature of the business would be valued at the date of the marriage when it was low but the growth during the marriage would be all marital, which may not be fair to the person who created the idea prior to getting hitched," Newman says.

A survey of 1,600 members of the AAML found that 51 percent of attorneys say there’s an increase in the number of Millennials asking for prenuptial agreements. Another 62 percent say the increase has happened in the last three years. “Couples are getting married at later ages these days and are consequently entering their relationships with more to protect in the event of a divorce. A prenuptial agreement often represents the most effective way to address these concerns and safeguard individual assets before exchanging vows,”Joslin Davis, president of the American Academy of Matrimonial Lawyers said in a press release. “Members of the Millennial generation are particularly choosing prenups as the best option to cover separate property holdings, business interests, anticipated family inheritances and potential alimony claims.”

When you’re happy and in love with your spouse-to-be, the idea of getting a prenup seems like a total buzzkill, but it may be an important convo to have. “There are lots of reasons to get a prenup, and a few reasons not to,” attorney, speaker, and television personality Elura Nanos tells Bustle. “The only good reason NOT to get one is that you fully understand the law and have determined that you don’t need one based on your finances and personal beliefs.”

Getting a prenup doesn’t have to mean anything bad. It may just mean you’re actively looking out for yourself and your future. Here are three reasons to should consider getting a prenup:

1. It Can Save On Litigation Costs If You Do Decide To Get Divorced Later On

Weddings aren’t cheap and neither are divorces. “Divorces can cost tens of thousands of dollars right when the couple needs it most—when they’re looking to establish two households where there used to be only one,” Los Angeles-based lawyer, Chloe Wolman tells Bustle. “A prenup, by contrast, can run only a few thousand dollars.”

Intellectual property can be a challenge for divorce courts and expensive for litigants, Wolman says. For instance, what is his patent worth? What's the value of her trademark? Can one party "buy out" the other and keep that asset? Or do you simply divide the income and residuals in perpetuity?

“Sometimes making a value determination on intellectual property assets will require an expensive expert — or two experts if the parties cannot agree! A prenup can avoid this whole issue,” Wolman says. “If the prenup says that all of his patents (if he should obtain any during marriage) are his separate property and all of her trademarks (if she obtains any during marriage) are her separate property, there will be no need for costly division.”

Goodwill, on the other hand, is a concept in California that is the "expectation of continued public patronage.” “What that means is, if you have, say, a dental practice that you've established over a number of years, you can expect that people will continue to visit your business,” Wolman says. “Word of mouth has been established. You have regular patients. All of that has a value. This can be one of the most expensive areas to litigate because the parties will almost certainly need dueling experts to establish the value of the business goodwill.”

At the same time, personal goodwill is a similar concept. Meaning, if you’ve created a name for yourself in your industry, “there's a value to the public's continued patronage of you.” So, a prenup can establish your work and reputation and goodwill as your own. If you plan on working in a type of industry like entertainment, law, or others where you’re unique and your reputation is important, a prenup can avoid problems down the road if you need to divorce.

4. Some Prenups May Even Require Six Months Of Marriage Counseling

“Some of my couples come to me because it was stated in their prenup that they need to do a certain amount of marriage counseling before they can get a divorce,” relationship coach and therapist Anita Chlipala tells Bustle. “I love this! I wish all prenups included at least six months' worth of marriage counseling before divorce proceedings could be initiated. Too many couples wait about six years from the start of problems to seek professional help, and perhaps having mandatory counseling would help couples seek it out sooner rather than later."

According to Chlipala, six months worth of marriage counseling can end up being pretty beneficial. “It definitely helps them stay together — at least with me,” Chlipala says. “I educate my couples about what they need to make their marriage work, and which behaviors to avoid to avoid divorce. Sometimes it's beliefs that get in the way of success. When each spouse sees their own responsibility for the state of the marriage, they're more open to working on it. Prenups are such a hot topic because if one partner doesn't want one, they take it personally and assume the other person already has one foot out the door, which is not true.”

5. It Can Be An Important Part Of Good Planning

Anyone entering a marriage who owns anything of value should educate him or herself on how the law would treat those assets in the event of a divorce, Nanos says. Like with anything else, failure to plan equals planning to fail.

“Marriage is an emotional commitment, but it’s also a financial one,” Nanos says. “A prenuptial agreement can be an important part of good planning. It doesn’t have to be some sort of offensive or punitive document. Most people understand that drafting a will doesn’t mean that they wish to die; the same goes for prenups. Drafting one doesn’t mean a person is looking forward to a divorce. It just means they’re actively planning for their future.”

Talking about getting a prenup can be a tough conversation. What if you partner wants one and you don’t? It’s obviously way different than disagreeing over the color scheme for your reception. But as you can see here, getting a prenup doesn't automatically mean you’re anticipating divorce. If you're already anticipating divorce before you walk down the aisle, why bother getting married in the first place? Getting a prenup just means you know how to plan ahead. Besides, think of it this way: If you never get divorced, you never have to think about it agin. If you do, well, you just made your life a hundred times easier.