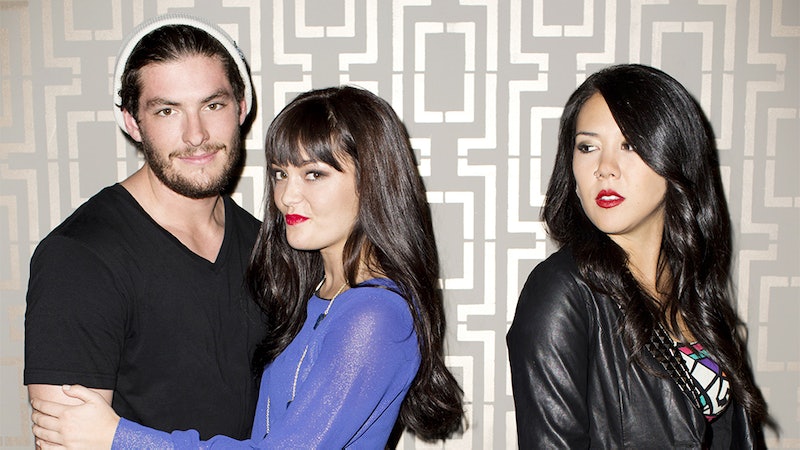 Following MTV's latest reincarnation of the Real World is a trying experience. You start to realize that your recaps are less reactions to the show itself than catalogs of your experience watching Real World: Explosion, struggling to get through another episode of awfulness while maintaining your basic dignity as a human being. I am a person, dammit! I believe in love and connection and the redemptive power of personal reflection! Maybe The Real World was designed to test the limits of our humanity, force the mirror back on us as we examine our lives and the extent to which we may or may not be fully present and engaged? It’s true that I’ve thought deeper thoughts about my role on Planet Earth watching TRW than even Cosmos or True Detective has inspired. Maybe sitting through a soul-crushing 5 minutes of Lauren talking to “MTV Producer Raquelle” about her pregnancy and the extent to which she should milk it for television drama may, in some way, have made us all better people?

HAHAHAHA no way. This is time we’ve thrown into the abyss, never to be returned to us. At the end of the day, each episode we’ve watched can only be counted as a poor decision. Of course those of you not recapping have the option, just like Lot’s wife, of not turning back. Me, I’m paid to be a pillar of salt each week.

BUT as every therapist, psychologist, spiritual teacher, and life coach has suggested in his or her particular brand of mental healing: you get to choose how you react. So this week, rather than reacting with my normal blend of vitriol and barely-contained exasperation, I thought I would pre-empt whatever MTV throws at us and offer what I think is the best way someone could look at this show, and this cast: as a walking assortment of STIs.

**A quick and hopefully obvious note: sexually-transmitted infections are no laughing matter, and I only make light of any below for the purposes of highlighting just how awful every part of The Real World: Ex-Plosion is. LIKE AN STI.**

Cory and Lauren are Chlamydia

These two obviously had a pregnancy scare a few weeks ago, which puts them into special territory even among the other nine functional blackout beasts they live with, but “pregnancy is the ultimate STI” is a gross and infantile expression. So, instead, I’ll suggest that Cory and Lauren most closely resemble Chlamydia — you know, the one that makes you blind. Cory and Lauren have been an "on-again, off-again item since eighth grade" that have never cottoned to the fact, in however many years since, that they're a trainwreck together. Everyone else can see it. You. Me. Most domesticated animals. ("MTV Producer Raquelle" was of course blinded in her own way by a quest for ratings when she tried to talk pregnant Lauren into staying on the show, but that's another blog post.) But Cory and Lauren? Blind as chlamydia-stricken bats.

Jay and Jenna are Gonorrhea

Gonorrhea is arguably the most common STI on the planet, and as such is (mostly) easily avoided by utilizing condoms in a monogamous sexual relationship. But when you’re of borderline cro-magnon intelligence and spend your time making .mov files of your diverse sexual encounters, you definitely already have it. I mean are it. Why can’t Gonorrhea just go away?!? Why, with so many other STIs to transmit, do we still have to contend with this totally predictable and exhausting entry? Also: “The Clap” just sounds like a perfect general description of Jay and Jenna, for whom I want to slow-clap every non-fight and non-confrontation and non-confessional about the state of their “relationship.” Clap. Clap. Clap.

Jenny and Brian are Syphilis

Back before medical science was really a thing, famous artists (and probably lots of non-famous lovers of life) would often succumb to the disease known as the “great imitator” for the way its symptoms often mirrored those of other diseases. Penicillin’s invention in the 1940s would significantly decrease the rate of contraction in modern countries, but cases persist in less developed parts of the world. Parts of the world like the relationship between Jenny and Brian, which seems rooted in pre-industrial expectations and codes of conduct. We can’t fault them for being hate/pus-filled passion fiends! They don’t have our contemporary education.

Thomas and Hailey are Mononucleosis

Mono, aka the “kissing disease,” hits particularly hard among those age 15-17. And not only did Tom and Hailey go out and break up when they were teenagers, but they both still act like members of that group, too! We should also make note of the fact that mono tends to make you lethargic, which would be Tom’s epithet in a Greek poem. “Tom the Lethargic struggled to get out of bed, or form a coherent sentence,” Homer might have written. And, like mono, Tom and Hailey’s drama is overplayed and incredibly boring. We get it! You have mono! We all had mono.

Scabies is a contagious skin infection caused by a very small species of mite. Jamie, like a very small species of mite, loves burrowing her way into other people’s business under the guise of “thoughtfulness” and, in turn, infecting their skin. Something something tattoos and skin infections? I imagine Sarcoptes scabie ALSO likes to think it’s being cute and a real “truth teller” when it, you know, gives people scabies.

Arielle and Ashley have a clean bill of health

There is nothing immediately terrible about Arielle and Ashley or their relationship, which while complicated like any of the others seems founded on something resembling mutual respect. By the standards of TRW? These two might as well be your 60-years-married WWII veteran grandparents who have only ever loved you, unconditionally, and brought joy to the lives of their friends and family. They’ve never even heard of STIs!