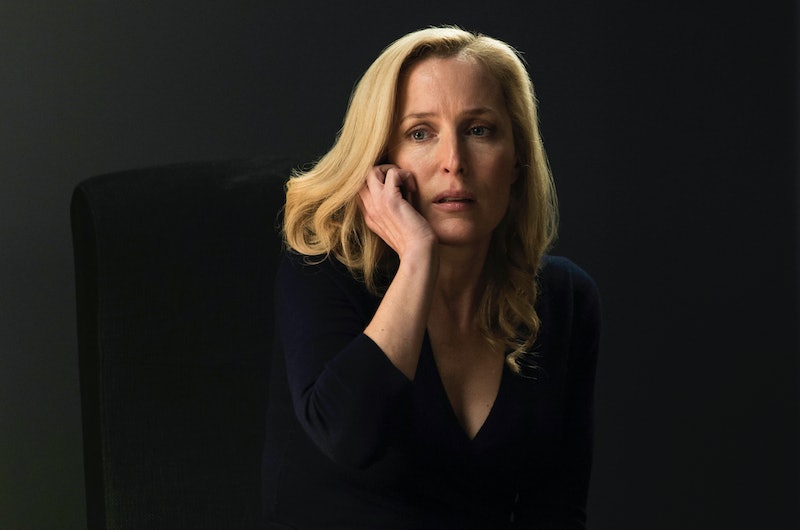 The Fall Season 3 picked up exactly where it left off — with Paul Spector, Detective Anderson, and Rose Stagg being rushed to the hospital after that bloody Season 2 finale. Stella is hellbent on keeping Paul alive so he can stand trial and go to prison for life, but her most important scene — and arguably one of the most powerful moments of the season — is when Stella talks about consent on The Fall. Rose's husband expresses that he can't understand why his wife didn't scream or fight back when Paul entered the house and successfully abducted her despite the fact that the entire family was home. Camera footage shows that she appeared to leave the house willingly with Paul.

Although he doesn't seem to be deliberately victim-blaming, this all-too-common response can be devastating to survivors who are already angry with themselves as they think back and question why they didn't do "more." Stella, one of the best feminist characters on TV, gives Rose's husband a powerful explanation of what consent really means — because it doesn't always look or sound like people think it does:

"Men always think in terms of fight or flight. In fact, the most common instinct in the face of this kind of threat is to freeze. If she didn't fight, if she didn't scream, if she was silent and numb, it's because she was petrified. If she went with him quietly, it's because she was afraid for her life. And not just her life - yours and Nancy's and the baby's. In that state of fear she might well have been compliant. She might well have submitted. But that does not mean she consented."

Unsurprisingly, the scene resonated deeply with many viewers — both women and men — when the episode aired on BBC last month:

Plenty of us have tried to explain this concept to confused family and friends — but it's hard to explain when we sometimes don't even quite understand it ourselves. And, the law isn't always on our side either — in a number of states saying "no" isn't enough and rape can only be prosecuted if "force" was used, as reported by The Atlantic. Not only does this dismiss the very real "freeze" response, but it furthers the idea that the blame lies on the victim's shoulders — and it can reinforce the damaging idea that a survivor is somehow at fault.

Stella's explanation was both spot-on and powerful — as a TV character, she successfully delivered an important message in a more compelling way than I've ever seen or experienced in real life.

More like this
Here's What Jeffrey Dahmer's Dad Has Said About His Other Son, David
By Grace Wehniainen
Where Is Lionel Dahmer Today? Jeffrey Dahmer’s Father Reflected On The Serial Killer’s Death In 2020
By Brad Witter
Glenda Cleveland Died 2 Decades After Trying To Turn In Neighbor Jeffrey Dahmer
By Brad Witter
Where Is The Bling Ring’s Rachel Lee Now?
By Arya Roshanian
Get Even More From Bustle — Sign Up For The Newsletter