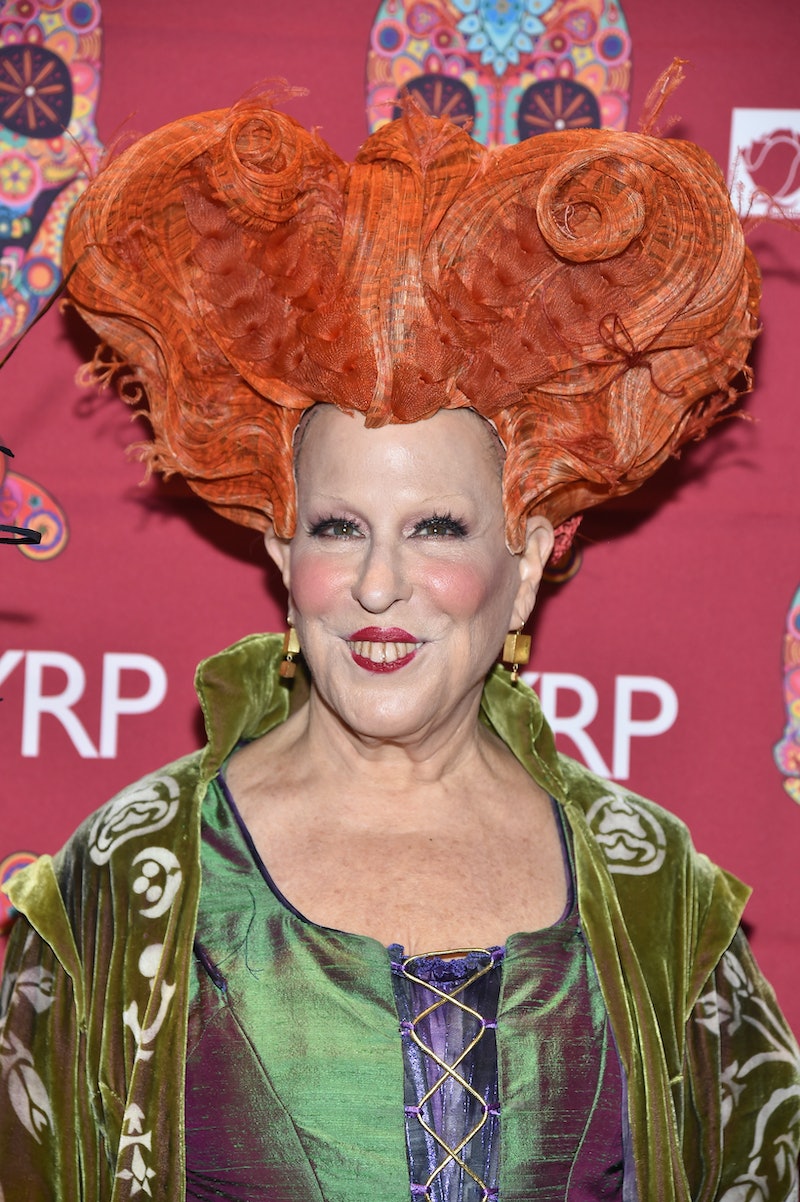 One thing that's been desperately clear since 1993 is that the Halloween classic Hocus Pocus deserves a sequel. And if you're still clinging to that dream as much as I am, then take heart because Bette Midler has introduced a little extra magic into the world that's sure to keep your hope alive. On Friday, Midler dressed up as Hocus Pocus' Winifred, the character she portrayed in the movie, at the Waldorf Astoria's Hulaween Party in New York City. And oh my goodness, someone fetch me a vacuum cleaner and a cauldron because I'm totally in Hocus Pocus nostalgia territory right now.

Can everyone also take a second to just admire how spectacular Midler looks in this costume? The 70-year-old actress spared no level of detail in recreating Winifred's beloved look. From her stacked coiffure of red locks, broomstick, and power combo of heavy makeup and a flowing, ethereal dress, Midler has gone all out in recreating what is truly an iconic look.

Suffice to say, it's kicked my nostalgia into overdrive (particularly during peak witch season), with Midler's on-point Halloween costume reigniting my desire for Hocus Pocus 2 to finally happen. Because, come on, Hollywood — this isn't just fans who are wanting this. Midler, the main star of the movie, clearly wants it to happen to. I mean, if this costume isn't enough to prove that, then surely her past comments concerning a Hocus Pocus sequel do.

Midler has repeatedly given her vocal support to the movie eventually happening someday. Back in 2014 during a Reddit AMA with Midler, the star divulged that herself, Sarah Jessica Parker, and Kathy Najimy were all happy to be involved in a potential sequel, but that Disney needed to be inundated by fan support for it to happen. She wrote,

Inundate the Disney company, because I have canvassed the girls and they are wiling to do it, but we have no say in it, so if you want a HOCUS POCUS 2, ask the Walt Disney company.

And on Thursday, Midler told Billboard that she's still completed baffled as to why the film hasn't been given the go ahead. She stated, "For the life of me, I can’t understand why there’s not a sequel". Me too, Queen. Me too.

I mean, at this stage, if the fine people at Disney can't see Midler in her astounding Winifred costume and think "this Hocus Pocus sequel needs to happen immediately," then I think it might truly take some genuine witchcraft in order to convince them.

With that in mind, if anyone would care to join me in conjuring this, then please, hop on your vacuum cleaner and meet me at midnight — and maybe we can combine our powers to make this Hocus Pocus sequel finally happen. Well, either that or all of us enjoy a couple of cocktails while performing "I Put A Spell On You" ... Whatever works.