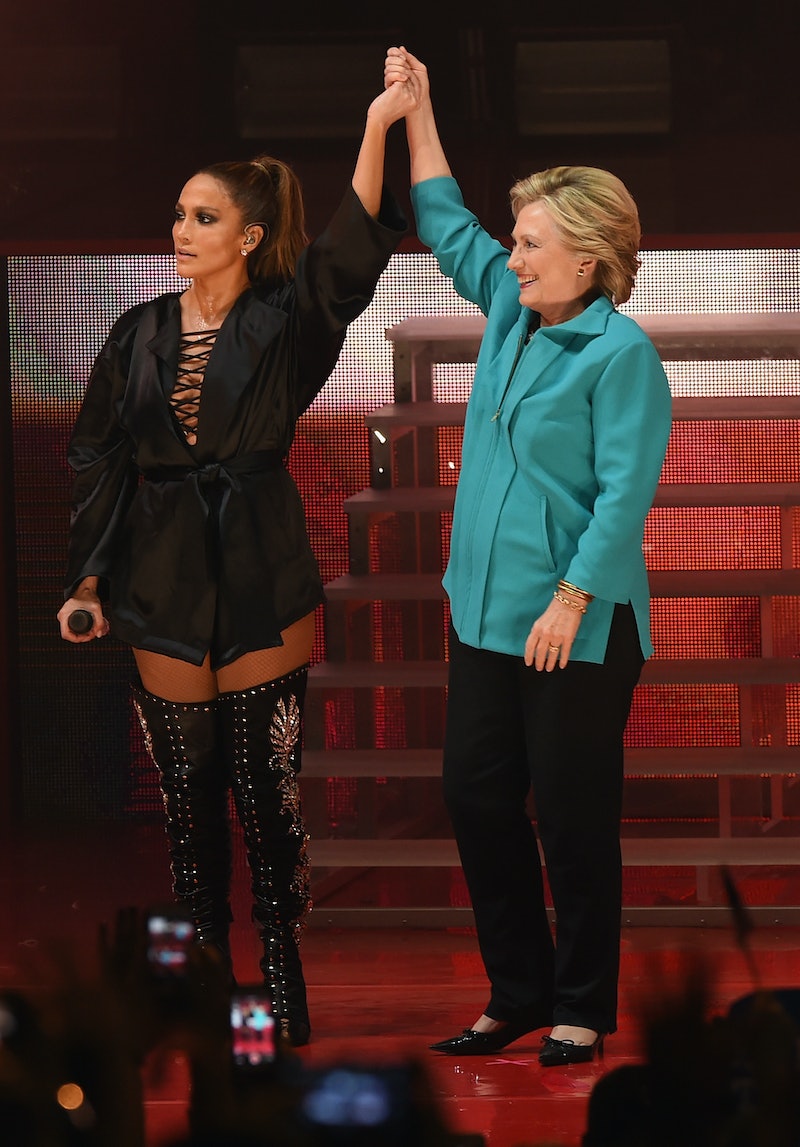 At a free "Get Out The Vote" outdoor concert in Miami on Saturday night, Jennifer Lopez brought Hillary Clinton on stage with her to rile up support among attendees. Near the end of the performance, the singer and actor announced Clinton to the cheering crowd as "the next and first female president of the United States, Hillary Clinton." Lopez and Clinton exchanged a hug before the candidate spoke to the crowd, urging them to vote for her. "We just heard Jennifer perform "Let's Get Loud", well I say let's get loud at the voting booth," said Clinton, referencing Lopez's hit song. "Don't wait another day to vote and lets get loud by knocking on doors, making calls, take out your phones. Because if we turn out, we win!"

Lopez closed the concert by performing "On The Floor," and she later Instagrammed a picture of the event captioned: "Thank you Florida for coming out tonight... it was amazing!! #gohillary #strongertogether #govote #lovetrumpshate #Latinos #letsgetloud." The singer has been outspoken in support of Clinton since the Democrat first announced her candidacy, even including a clip of the candidate's speech in her "Ain't Your Mama" music video and attending Clinton fundraisers.

Her support of Hillary 2016 isn't the only time that J.Lo has been politically engaged in politics, though. In the 2012 election, she appeared in a Latinos for Obama campaign ad, describing the president as someone who "has had our backs from the beginning" and praising him for, among other achievements, electing the first Latina Supreme Court justice, Sonia Sotomayor. More recently, Lopez condemned Republican nominee Donald Trump, urging voters at a concert to use all the"energy in here to make certain that Trump is not elected."

Lopez has also been active in political causes outside of electoral politics, many of them involving the Latinx community. She's advocated for more diversity on television in Washington, called for increased gun safety, and has won a GLAAD award for her support of the LGBTQ community. She's also proven to be highly generous; her charity, the Lopez Family Foundation, is dedicated to helping children and mothers worldwide. With that kind of political awareness and support, it's no surprise that Lopez would want to do everything she could to help the candidate of her choice get elected.

It's inspiring to see how many celebrities have involved themselves in the 2016 election, urging fans to vote and educate themselves on key issues. Musicians in particular have civically stepped up to the plate, with Chance the Rapper registering voters at concerts, Beyoncé stopping her concert to urge fans to vote, and now Lopez headlining a voter-oriented concert. While this election has certainly been trying for many in the United States, the passion that has caused tensions to run high will hopefully result in higher levels of democratic participation.