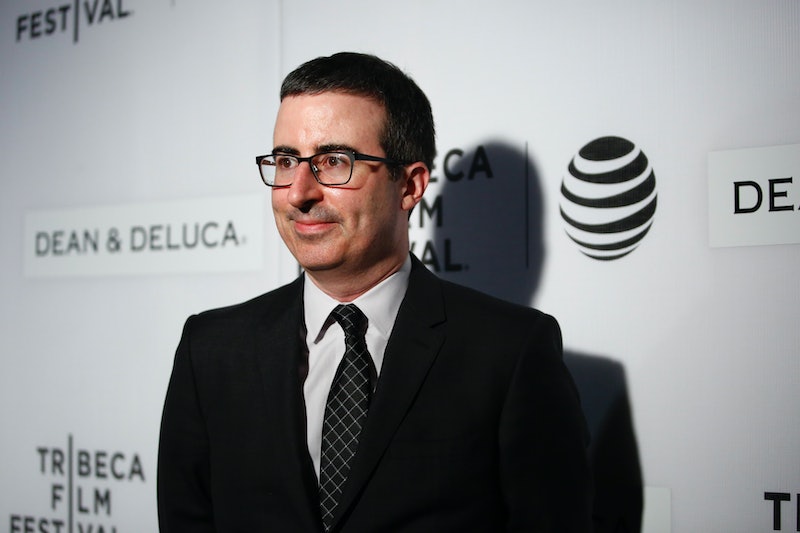 It's getting to that point in the election cycle where if there were a way for me to only consume news through John Oliver's Neville-Longbottom-if-he-grew-up-the-way-we-all-expected-him-to face, I would. Fortunately, despite his best efforts he seems to be unable to stay away from talking about the U.S. presidential election — or what he terms "the Sh*t-Filled Cornucopia That Just Keeps On Giving 2016." This was especially welcome Sunday, when in the most recent episode of Last Week Tonight, Oliver bottom-lined why Election Day is a Tuesday — and why that's outdated and stupid — in his "How Is This Still A Thing?" segment.

There's no provision in the Constitution for a specific Election Day; instead, as the segment points out, "the reason actually comes from an 1845 law, passed for a very 1845 reason" — namely, that most of the country would need a "travel day" to get to their polling location because, you know, horses were often the fastest way to travel. And you couldn't interfere with the Sabbath, so, giving over Monday to travel, you ended up with Tuesday for voting.

"Yes, we vote on Tuesdays because of the Sabbath," the segment said, "making voting day the only thing in American life still scheduled around Sundays, other than the operating hours of Chick-fil-A, and new episodes of America's Funniest Home Videos."

The segment goes on to observe that, while many states offer early voting or mail-in voting, 13 states don't. Moreover, requiring everybody to vote on the same day can lead to crazy long lines at polling places — one news clip showed lines stretching out of the polling location, up a flight of stairs, and into an auditorium full of people waiting just to get on the line to vote. "Holy sh*t," the announcer says. "All the wait times of Disney World, all the fun of the f*cking DMV."

Other problems with Tuesday voting include the fact that Tuesday is a work day, and many people have to take time away from work in order to vote, which can mean lost wages.

"So, what could be done?" the announcer asks. "Well, we could expand early voting, move Election Day to a weekend, or keep it where it is and declare it a national holiday like it is Puerto Rico, where their turnout is ... consistently higher than the 50 states."

The segment concludes by stating that, until it's changed, we'll have to keep on accommodating Tuesday voting, "just so farmers who have been dead for more than a century won't have an excuse to miss church."

Considering that there are arguably substantial strains on voters due to holding Election Day on a work day, it seems like an excellent time to ask "How Is This Still A Thing?"