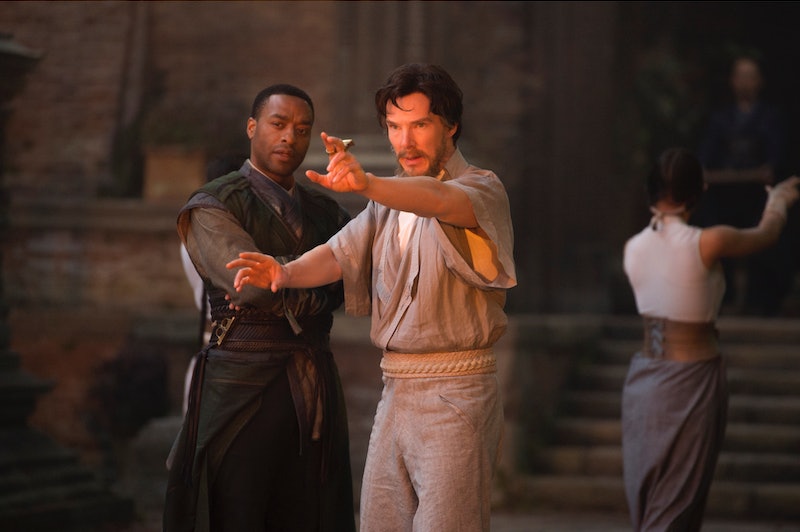 Leading up to its release, Marvel has really been touting the visual effects of Doctor Strange. The movie is about a surgeon played by sovereign British heartthrob, Benedict Cumberbatch, who is severely injured in an accident, thus losing the use of his magical hands. He decides to use those same hands for actual magic when he begins to train with the enigmatic Ancient One (Tilda Swinton) in the mystic arts. The movie also introduces the multiverse to the Marvel Cinematic Universe: a concept adapted from the comics wherein parallel universes are a real thing and characters can jump back and forth between them. If all of this sounds even more out-there than a billionaire with a robot suit and a scientist who gets really big and green when he's mad, that's because Doctor Strange is a pretty substantial Marvel shake-up. And even if you've seen every other Marvel movie in 2D, I recommend you opt for the more expensive ticket in this case. See Doctor Strange in 3D, if at all possible.

I don't believe that 3D adds to the experience everywhere it's offered. In fact, I require some pretty strong endorsements to bother with 3D at all. I don't need a realistic visual of Steve Rogers kicking me in the face, thank you very much. But Doctor Strange uses the technology differently than the Avengers and Avengers-adjacent movies do. Whereas those movies feature extraordinary individuals in (mostly) ordinary places, the whole backdrop of Doctor Strange is enhanced by adding a third dimension.

Cumberbatch may be slightly biased, but sue me, I trust him. (It's that voice.) He goes beyond just the 3D recommendation to hype the the 3D IMAX print as "probably the only way to see this film." In the IMAX-centric featurette below, the actor goes on to say, "I mean, it's spectacular. This truly demands that experience, because of how immediate and beautifully textured and dimensional the film is." Watch the whole clip to see what director Scott Derrickson and Cumberbatch's co-star Benedict Wong have to say about the stunning effects of the movie.

Part of my reluctance to accept 3D across the board stems from the fact that it seems to be applied where it isn't necessary. In an interview with Collider, Marvel Studios president Kevin Feige insisted that Doctor Strange isn't a case of wasted technology. "There are sequences of the film that 3D is actually necessary to tell the dimensional story that is happening through visuals," Feige said, "and we’re now finding ourselves in VFX reviews going, 'Okay we know this is perfect for 3D, this is built for 3D, but the story’s gotta work in 2D so how do we adjust it so it still works in 2D?'" According to Feige, Doctor Strange is 3D movie that's also got to live in a 2D world, not the other way around.

Early reviews of the movie are out, so you can peruse those to gather more opinions. But I'm convinced that a 3D ticket is necessary to take full advantage of Doctor Strange's brain-melting optics.