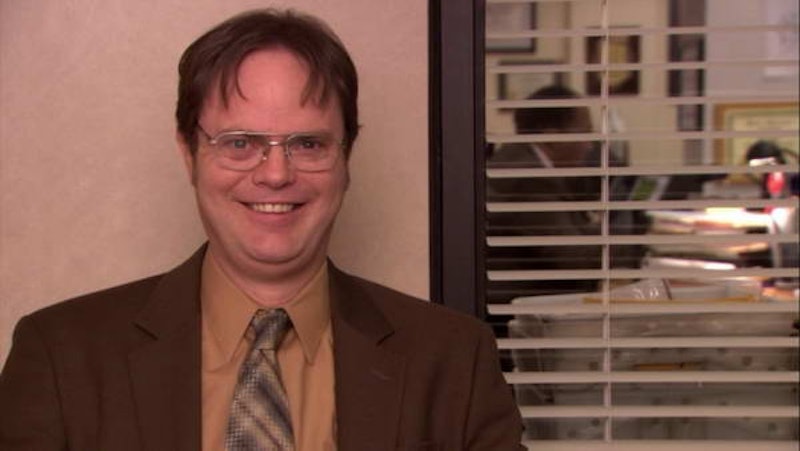 There have been some spectacular Halloween costumes in 2016, but this one takes the cake. Jenna Fischer's posted a photo of a child dressed up as Dwight Schrute from The Office and it is beyond perfection. She shared the photo on Twitter Monday and captioned it, "Happy Halloween!!!" What better way to honor the series Fischer once starred in for nine seasons than by dressing up as the unforgettable character played by Rainn Wilson? The photo is of a 2-year-old boy, Lincoln, who is the son of a woman named Ashley Gill, according to Buzzfeed.

Now, let's analyze the costume. Of course, you can't don a Dwight Schrute costume without his iconic glasses, mustard colored shirt, khaki pants, and the part down the middle of his hair. To top it off, he is also holding a beet, because Dwight loved beets and even owned a beet farm (Schrute Farms). Can we also talk about her facial expression? He is seriously channeling Dwight's infamous scowl. Finally, there is Dwight's quote next to him, which reads, "How would I describe myself? Three words: Hard working, alpha male, jack hammer, merciless, insatiable." For those fans who need a refresher, that is an actual Dwight quote from the Season 3, Episode 13 episode titled "The Return."

I think it's safe to say this is the best Dwight Schrute costume ever, right? I can't help but think about how Dwight would react to the costume. He would certainly have some words of wisdom and the best reactions, so why not imagine his response by listing how I think he would most likely respond to the costume. You're welcome.

Typical reaction from him, right?

Sometimes he didn't know how to respond.

And sometimes he reacted with tears.

Those costumes are pretty impressive.

Yeah, that sounds about right.

When didn't he tell on other people at the office?

It really is a serious matter.

Here's hoping Rainn Wilson at least responds to the costume, because it'd pretty much be like Dwight was reacting himself.

Editor's Note: A previous version of this article incorrectly referred to the child in the costume as Fischer's daughter. Fischer has corrected this misconception on Twitter.