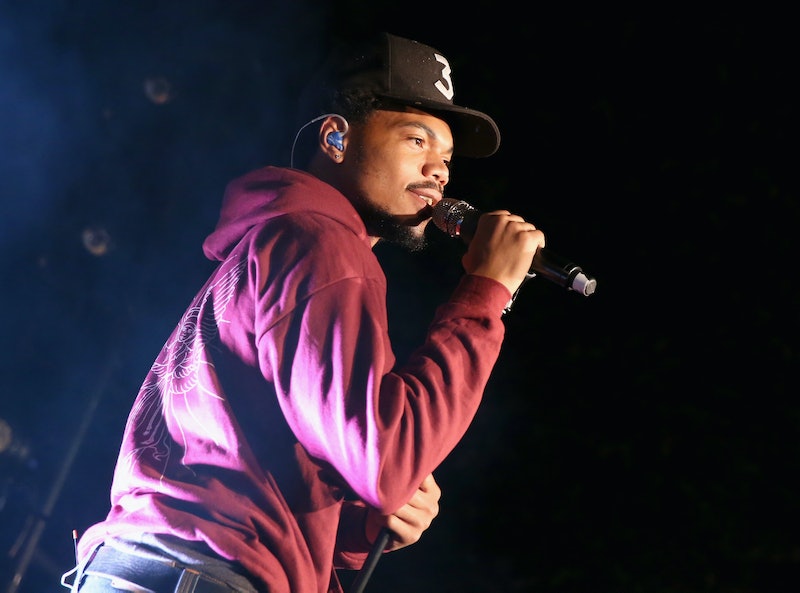 Chance the Rapper may be heading into Oscar territory with his new role in Slice, a thriller which was secretly shot in Chicago in the most low-key way over the Summer. Yep, Chance the Rapper shot an entire movie this year and nobody knew about it. Unfortunately, we won't get to see the end results of their secret footage until the second half of 2017.

The film comes from A24, the production company that created recent Oscar fodder like Lenny Abrahamson's Room as well as the critically acclaimed Moonlight. They'll also be distributing another film that has serious Oscar buzz, Shia LaBeouf's American Honey. Slice was written and directed by Austin Vesely who directed music videos for Chance's songs "Sunday Candy" and "Angels." The film tells the story of a lovable motorcycle-riding werewolf outlaw named Dax Lycander, who is framed for killing multiple pizza delivery boys. Weird enough for you?

In more exciting news, Chance took to Twitter on Monday, October 31 with a little Halloween trick-and-treat for his fans. Chance the Actor shared a nineteen-second clip from the film — all that's seen is the rapper's back as he sits astride a motorcycle and revs the engine while some goosebump-inducing music plays. But that nineteen seconds is certainly enough to make it seem like this movie is going to touch our heart strings in some way.

Apparently, the idea has been ruminating for a while, though, because Fader interviewed Austin Vesely about booking Chance as far back as August 2015 when the film was still in pre-production. Vesely compares the style to early "Tim Burton stuff like Beetlejuice and Edward Scissorhands" which plays into the setting — an ordinary town "where really interesting things happen, but treat it sort of as normal." He also bragged about a "good chase scene" which probably made it into the final movie even though according to Vesely, Chance admitted, "'So do I have a bike in the movie? My dad always told me never to ride one of those.'”

Vesely went on to describe Chance's impact on the film — the writer and director tailored Chance's character Dax to the actual rapper, and may also be using Chance to curate some of the music on the film. (Though Vesely also wanted to give a shot to other Chicago musicians like Macie Stewart and the band Marrow.)

Chance the Rapper starring as a motorcycle-riding werewolf in a supernatural and yet all-together ordinary town? Seriously, sign me up. Let's do this already.

More like this
This James Bond Event At Abbey Road Studios Was A 007 Fan's Dream
By Samantha Rollins
The 'Love, Lizzo' Harry Styles Scene Is Just 1 Moment That Made Fans Feel Seen
By Brad Witter
Christine McVie Dies At 79 & Fleetwood Mac Reacts With Touching Tributes
By Radhika Menon
Adele Freaks Out After A Fan Used A Filter On Their Selfie At Her Show
By Radhika Menon
Get Even More From Bustle — Sign Up For The Newsletter