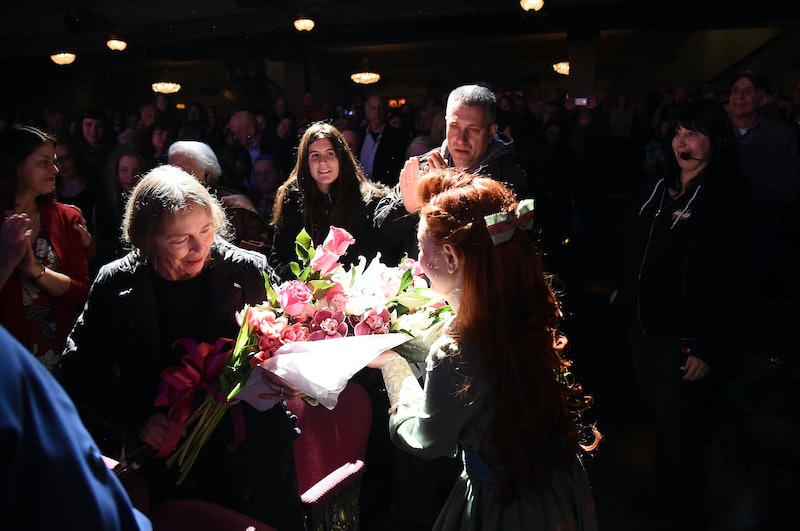 Children's books author and illustrator Natalie Babbitt died today at the age of 84. She lived in Hamden, CT with her husband, Samuel Fisher Babbitt. A publicist from Macmillan Children's Publishing Group confirmed her death in an email to Bustle, but could provide no additional details.

Babbitt is best known for her 1976 novel Tuck Everlasting, which eventually served as the basis for a movie and Broadway show of the same name. The book, which celebrated its 40th anniversary in 2015, has sold over 3.5 million copies since publication. Babbitt was also awarded a Newbery Honor in 1961 for her work on Knee-knock Rise, and in 1975, she was a National Book Award finalist for The Devil's Storybook.

Born in Dayton, Ohio, in 1932, Babbitt spent her childhood drawing and reading fairytales. Her mother, she wrote on the Scholastic website, gave her art lessons, and Babbitt grew up wanting to be an illustrator, a goal she eventually achieved. She went on to study art at the Laurel School in Cleveland and at Smith College.

After graduation, she married Samuel Fisher Babbitt, and they had three children together: Christopher, Tom, and Lucy. Samuel Fisher Babbitt was actually the first of the pair to try his hand at writing. He took some time from his academic career to write a novel, but he didn't enjoy the hours. Babbitt's sister also tried her hand at a comic novel, but discovered she would need to do some substantial rewrites. From their mistakes, Natalie Babbitt learned that you have to give writing your undivided attention. Years later, she would put that knowledge to good use.

In 1966, Babbitt first flexed her muscles as an illustrator on The Forty-ninth Magician, a book written by her husband. She continued to write and draw children's stories, even when her husband became to busy to continue writing. In 1967, she released her first solo book: Dick Foote and the Shark. A career was born.

In 1976, she released her most famous work: Tuck Everlasting, which circled around a young girl named Winnie Foster and the immortal Tuck family. When Winnie, just 11 years old, meets "17-year-old" Jesse Tuck, a friendship quickly blossoms. He introduces her to the magical spring that grants eternal life to its drinkers. The tale is a gorgeously wrought story about life, death, and the strange sadness of immortality. The book has never been out of print since its original publication.