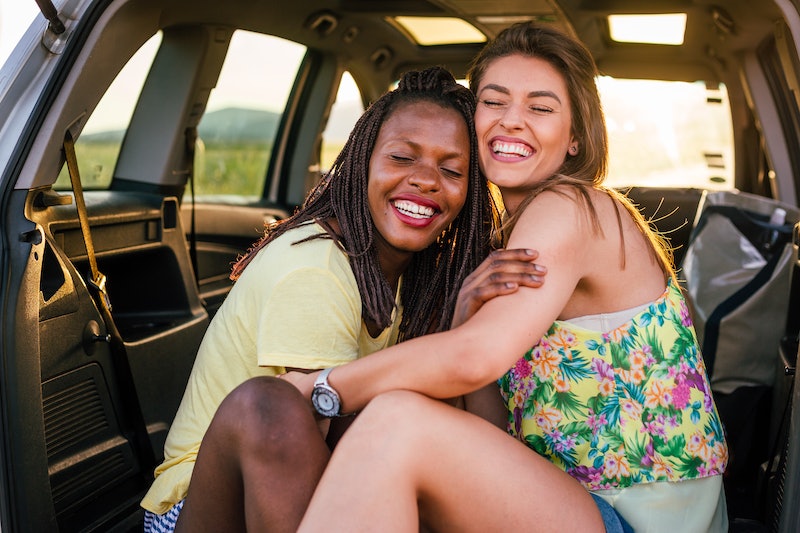 We all know the cliche: women are natural social butterflies, while men are all about spending time with a circle of tight-knit bros, right? Our ideas about how men and women make new friends are pretty gendered; anywhere you turn, you'll see a lot of cultural references ( on shows like Sex & The City, Scrubs, and New Girl, to give just a few quick examples) to the differing natures of female and male friendship styles. But are these facts, or just stereotypes? And if the differences are real, are they due to biology or social conditioning?

Increasingly, we're developing an understanding of the different "social brains" of men and women, and seeing that there are in fact some wiring differences on a basic neurological level. But whether those differences are applicable to everybody, divided clearly by gender, or something that develops naturally rather than in response to social pressures (or a combination of both) all remain mysterious.

Talking about gendered brains is tricky as hell; it's not as simple as Mars and Venus. The influences on our socializing behavior are diverse — from social expectation to opportunity to hormonal response to neural connections — and we're still trying to figure out the bigger picture.

Why Men May Have Trouble Making Friends

Studies have found that, for adult American men, forging friendships that last can be difficult. This is mostly due to social reasons — males aren't necessarily given the space or the social vulnerability to be able to lock down friendships in long-term ways. An article in the New York Times earlier this year explains that "many men believe that talking about personal matters with other men is not manly. The result is often less intimate, more casual friendships between men, making the connections more tenuous and harder to sustain." The expert Dr. Jacqueline Olds told the Times that “men’s friendships are more often based on mutual activities like sports and work rather than what’s happening to them psychologically. Women are taught to draw one another out; men are not.”

But the differences between male and female friendship capabilities may, it seems, also be traceable to various neurological aspects that influence how the genders interact. It becomes very complex, though, when you investigate the details.

For example, a fascinating study conducted in 2008 pointed out the difficulty in making gendered assumptions about socializing based on biology. It measured the size of a subdivision of the ventral prefrontal cortex that is involved with social cognition. Among adults, the area tends to be larger in women than it is in men; in children, though, it tends to be larger in boys. However, to further complicate things, the scientists also tested the size of this brain area in relation to "femininity" in participants, regardless of gender. How did they determine a subject's "femininity"? By having them take the Personal Attributes Questionnaire, a 24 item inventory that asks "subjects to rate themselves on a scale from 0 to 4 for certain personality characteristics demonstrated to be stereotypically male or female. Items are then scored such that 0 corresponds to very feminine and 4 to very masculine. For each individual, the mean score from the 24 items was calculated to yield an overall rating of masculinity–femininity." Using this quantified idea of "femininity," researchers found that the more "feminine" the woman, man, girl or boy, the larger the part and the better the subjects did on social cognition tests.

Scientific American, commenting on this, noted that it's often very tricky to figure out what's nature and what's nurture in studies like this: while seeing these differences in children mean we might think things are "innately programmed," they said, "sex differences that grow larger through childhood are likely shaped by social learning... lifestyle, culture and training." It's always important to remember that gender-based treatment for kids starts radically early, and they soak it up like a sponge. Context always matters.

A new study conducted by Georgia State University, published in the Proceedings of the National Academy of Sciences, has discovered that in the brains of male and female adults, there does seem to be a very distinct biological difference — and this difference might have genuine effects on how we treat social disorders and psychiatric issues.

We already know that women tend to respond to social cognition in different ways than men — for example, according to one study from Penn State in 2013, women's neural connections facilitate better responses to interpersonal relationships and social cognition tests. But this new Georgia State study introduces a new factor: a gender difference between brain reactions to two different hormones. The scientists tested male and female hamsters to examine their reactions two different hormones, serotonin and arginine-vasopressin; the results were pretty remarkable.

The relationship between both of these hormones and social behavior isn't actually new. A study in 2015, for instance, found that people with social phobia were often suffering from too much serotonin, while too little vasopression was found to be linked to the social problems of autistic children in research released in the same year. But this is the first time anybody's suggested these hormones may be handled differently by adult men and women.

This is huge for a multitude of reasons. For one, serotonin re-uptake inhibitors (SSRIs) are a huge part of depression treatment, and this study suggests that female and male brains react radically differently to them. For another, it may create the necessity for tailoring drugs for social disorders that involve aggression or hypothalamus problems,depending on gender.

But this is still only a test in hamsters; we're not sure if human brains work the same way. And we're not sure how or why this works, either. Does this difference emerge as we grow older? Is it innate in children? What evolutionary purpose could this brain-wiring actually achieve?

Either way, it's a new piece in the puzzle that suggests men and women do in fact treat social situations differently, and that it's the product of both gendered behavior patterns enforced by society and, perhaps, certain different aspects of our brains. Knowing exactly what's going on, though, is a long way off.

More like this
7 Women Share Their Best Orgasm Stories
By Lexi Inks
The Best Time To Date After A Breakup, According To Experts
By Bustle Editors
Expert Tips For Being On Top When You're Plus-Size
By Lexi Inks
Why Virgo & Libra Can Make A Great Couple, According To Astrologers
By Kristine Fellizar
Get Even More From Bustle — Sign Up For The Newsletter