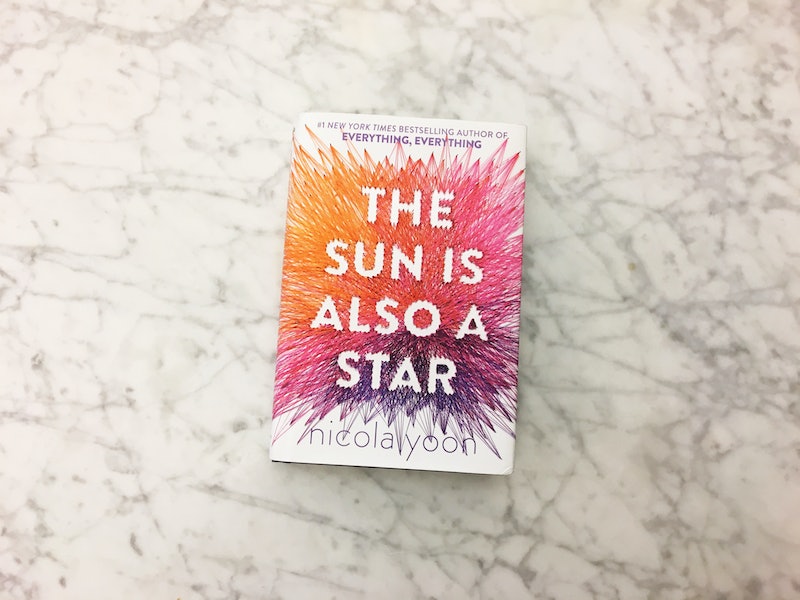 The National Book Award finalist The Sun is Also a Star is a story that could have only been written by a hopeless romantic — someone who believes that the universe can come together in spectacular, unimaginable ways to join two people together.

Nicola Yoon, the #1 New York Times bestselling author of Everything, Everything , is definitely that someone.

"I'm going to tell you that I am just a romantic goober," she tells Bustle. "I'm head over heels in love with my husband. I will tell you all about it forever and ever if you let me. So I really wanted to capture some of the spirit of our relationship with Daniel and Natasha."

Natasha, like Yoon, is a Jamaican immigrant, but, unlike Yoon, she's a total pragmatist who believes in numbers and science and stars. She doesn't believe in fate and she definitely doesn't believe in soulmates. Daniel, like Yoon's husband, is the Korean-American son of immigrants. He's a poet who believes in the Japanese idea of koi no yokan, which loosely translates to "love at second sight." More accurately, it's the idea that you will inevitably fall in love with someone you've just met.

The two New York City teenagers meet on the most fateful morning of their young lives: Natasha is set to begrudgingly leave the country that evening, unless she can secure a stay of deportation, and Daniel is on his way to a college admissions interview with a Yale alumnus when he runs into her on the street. The two strike up a tentative friendship that blossoms into a full-blown romance by the end of the day. But if Natasha can't find a way to stay in the country, their relationship will come to a tragic, premature halt.

The novel is set over the course of one day, a timeline that emphasizes Yoon's belief that the universe plays a role in even the most minuscule of matters — every day, every hour, every minute, every second of this story counts. But writing a novel set in under 24 hours proved challenging. "The regret was real," she says with a laugh. "You have to keep such tight track of the day, especially if you're looking at subway schedules and average walking speeds. Is it possible to get from this point to this point in this amount of time? I wanted them to do so many things but I wanted it to be believable so that the readers felt like they had moved from one emotional place to another."

Throughout the day, Daniel and Natasha travel from Midtown to Harlem to Brooklyn and many places in between. But more importantly, their travel on emotional journeys that transform them from the inside. Over the course of that single day, Natasha and Daniel learn a lot about fate — namely that their destinies are not determined by them alone. Yoon gives characters on the periphery their own chapters, and no part of their tales should be taken for granted.

Everyone has to role to play on Natasha and Daniels' stage.

Everyone has a role to play in their final act, too. All the characters come together to influence the spectacular conclusion to story of these young lovers.

"It took me a long time to come to this ending," Yoon says. "I was thinking about Natasha and her view of the universe and how long it can take for universes to form. That's when I finally figured it out — what the ending should be."

The Sun Is Also A Star is a novel about love, about immigration, about cultural identity, about language, about what it means to be American. But mostly it's a novel about fate.

That idea is best summarized in the novel's opening line, a quote from astronomer Carl Sagan. Yoon writes:

When Nicola Yoon says you have to start at the beginning, she means it. Nothing in her novel is extraneous, and everything — and everyone — has an impact on the final turn of events.

"I just wanted to show how these two people who seem so different because they're from different walks of life are actually connected by like 1000 different things they don't even know about," Yoon says. "I really think we're all connected, and if we could slow down and take the time we'd be able to see it."

In the end, this is novel about the universe — and how it conspired to unite these two souls.

The Sun is Also a Star by Nicola Yoon, $11, Amazon