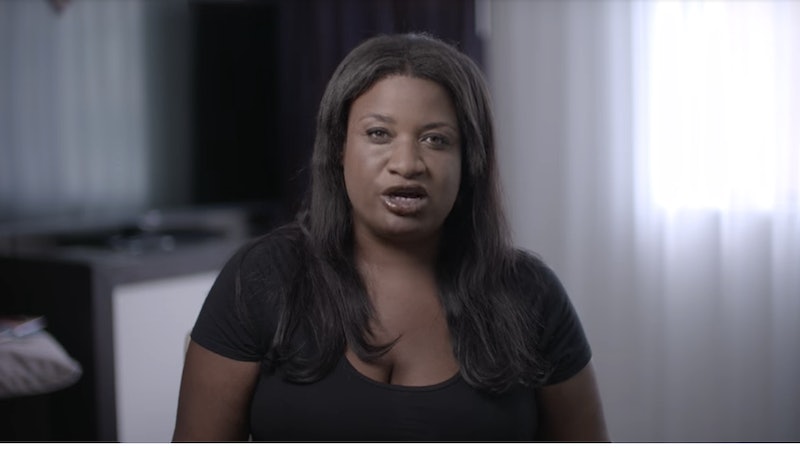 In 2012, 66 percent of African Americans voted in the election, compared to 64 percent of whites. That was the first time in history that blacks had a higher turnout than whites in a presidential election. Yet the conversations in this election cycle have largely ignored black voters. (For example, the words "black lives matter" were not uttered at a single presidential or vice presidential debate.) So as the candidates and other policymakers continue to assume that these voters are not engaged in this election, the #VotingWhileBlack campaign is giving them the political attention they deserve.

The campaign was started by Color Of Change PAC, a nonprofit organization that talks to black voters about the political issues that affect their communities and encourages them to focus on down-ballot candidates, too. Arisha Hatch, the director of Color Of Change PAC, tells Bustle that this organization and the #VotingWhileBlack campaign works to "build black, independent, political power."

"I don't think that black millennials aren't engaged; I think we're changing what engagement looks like."

And establishing this black power is an important elevation from the presence of and activism for black lives. "As Black people continue to vote at historic levels, it becomes harder and harder for candidates and elected officials to ignore a cry for justice and safety in our community," Hatch tells me. "Black voters are the key to this election cycle."

In 2016, these same voters are expected to carry Hillary Clinton to the White House and, perhaps more importantly, deny Donald Trump any more of their time. (The latter is clear — a mere 4 percent of likely black voters are supporting Trump.) For Hatch, this election has largely been treated as "business as usual," in that other elected officials have been reluctant to denounce Trump for his divisive rhetoric and his aversion to political correctness. "Really, what people are asking for in political correctness is that we don't continue to marginalize minorities and women," Hatch tells me.

So she's focused her efforts on #VotingWhileBlack to create a powerful, political space for black millennial voters: "We have a lot of work to do in building allies who will stand with us in this moment when they know that there's just something morally wrong happening."

#VotingWhileBlack was inspired by the term "driving while black" — the idea that although driving should be a simple, quotidian activity for all, black people are often subjected to racial profiling and are pulled over by police simply for being black.

"One of the biggest issues I see is that I can't vote for people who look like me. They have no black women in Senate."

Black voters have faced numerous barriers to voting — such as not receiving the right to vote until 1965 or, more recently, facing the slew of Voter ID laws in many southern states — yet the #VotingWhileBlack campaign works to ensure that black voters remain engaged in the electoral process, despite these efforts to stop them. Because of these obstacles, Hatch says she's noticed some of these voters struggle with whether their vote matters in this election, yet she has continued to encourage young voters by reminding them that "black votes are quintessential and can change the direction of a particular race."

Color Of Change PAC members and volunteers work together to host "text-a-thon" events in different cities. These events bring together African Americans and their allies in an effort to inform them of the down-ballot candidates and issues that could have significant policy changes for their communities. Hatch tells me that they send "peer-to-peer text messages" amplifying issues that black voters care most about: things like criminal justice reform, stop-and-frisk policies, or simply pushing back against racist rhetoric and policies, Hatch explains.

These #VotingWhileBlack events have attracted more than 1,000 volunteers and have engaged over a million black voters. John Legend has even participated in a virtual #VotingWhileBlack text-a-thon. One volunteer, Amber Phillips, tells Bustle this campaign has been a way for her to participate in the election beyond simply voting for one of the nominees. The campaign's website even encourages visitors to check if their local prosecutor is up for re-election this year, further focusing on issues like criminal justice reform by looking away from the presidential candidates to focus on local candidates.

"We're not just going to go out and vote for anybody. We want to force candidates to actually be thoughtful about our issues. For many black people, the status quo is not livable."

Phillips tells me that she knows African Americans have been mobilizing and organizing prior to this election, and that's one thing she thinks many politicians, as well as Clinton and Trump, mistakenly ignore when talking about issues relevant to these communities. "To place our issues in the context of this election does a disservice, and I think that's why a lot of the candidates are missing the mark in this conversation," she says.

Phillips recalls the strong black movement that emerged after the death of Trayvon Martin in 2012, particularly after George Zimmerman was given a not-guilty verdict. We spoke of the calls for policy changes and a restoration of value in the black communities that were present back then.

Yet for Phillips, this presence hasn't translated into power in political office. "One of the biggest issues I see is that I can't vote for people who look like me. They have no black women in Senate. ... After all this organizing and all this visibility, we shift the culture around black lives, and it's still not reflected in the most powerful positions in the world, which are some of our policy makers."

Through her work as the director of Color Of Change PAC and through the #VotingWhileBlack campaign, Hatch echoes Phillips' sentiment about the importance of young, black voters seeing themselves reflected in office. "We're not just going to go out and vote for anybody," Hatch says. "We want to force candidates to actually be thoughtful about our issues and to have policy recommendations for how we're going to move forward, for how we're going to change things, because for many Black people, the status quo is not livable."

That's why #VotingWhileBlack highlights down-ballot races. For example, Hatch says the campaign has made concerted efforts to bring young voters' attention to the "Sensation Six" — a slate of black candidates running in North Carolina. "We're really pushing to make sure that Black voters come out to vote in North Carolina, that they're very much aware that there is a slate of candidates that look like them, that share their values, who are ready for very important local offices, and who have the ability to impact so many important issues," says Hatch.

By focusing on down-ballot races through #VotingWhileBlack initiatives, both Hatch and Phillips hope to show black millennial voters that not only does their vote count, but that they can create powerful and meaningful changes.

"I think there's a ton of stereotypes around black people in our voting and I've just been around too many folks who look like me, who are my age, who are really engaged and passionate and coming up with solutions in new and creative ways," Phillips tells me. "I don't think that black millennials aren't engaged; I think we're changing what engagement looks like."